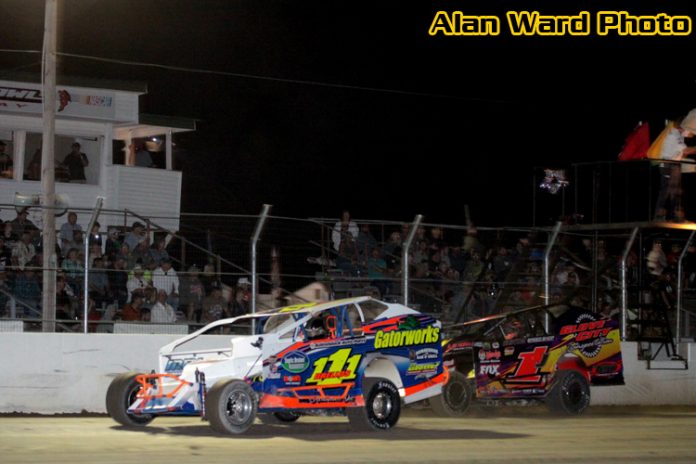 Three other drivers scored repeat wins during the event in weekly NASCAR Whelen All-American Series action, as Travis Billington, Scott FitzGerald, and Kaleb Shepard all returned to the winner’s circle in support division action. The event was held in memory of Richards, the late Devil’s Bowl Speedway founder and promoter.

The 67-lap main event for the KOD 358 Modifieds started off looking like a repeat performance by Bobby Varin, who won the KOD opener at Devil’s Bowl in June. Varin took the lead from Jeremy Wilder on the fifth lap and was running away from the pack after the halfway point when his left-front tire began leaking air. Despite having a few chances to make a pit stop during late-race caution periods, Varin elected to stay on the track and manhandle his car for the balance of the race.

Varin indeed led a handful of laps with the flat tire, but Drellos and Rocky Warner were all over him, and both drivers eventually slipped past; Drellos took the lead at lap 47. Varin fell back as far as fourth place when C.G. Morey entered the fray, but Varin found a line that worked and began charging back on three tires. He and Warner had an entertaining battle for the runner-up spot for several laps, but Warner was able to pull away and even chase down leader Drellos.

A multi-lane, last-ditch effort saw Warner pull even with Drellos coming to the white flag lap, but Drellos held steady and beat Warner to the finish line for the win. Warner’s second-place run was his best of the 2018 season, and Varin held on for a herculean third-place finish. Local driver Morey was a big surprise in fourth place after crashing hard in time trials. Kenny Tremont Jr. was fifth, followed by Brett Haas, Randy Green, Jessey Mueller, Allison Ricci, and Tim LaDuc, who picked up a $225 bonus as the top Devil’s Bowl Sportsman Modified driver.


A big pileup on lap 12 saw Jack Lehner get upside down, with Brian Whittemore and Matt Pupello also involved; no injuries were reported as the drivers all walked away. Vince Quenneville Jr. had a quick snap rollover in mid-air in his heat race and was able to start the feature. Drellos turned the quickest lap in time trials at 17.042 seconds, and qualifying races were won by Frank Hoard III, Marc Johnson, and Tremont.

Sixteen year-old Travis Billington of South Glens Falls, N.Y., topped the 20-lap feature race for the O’Reilly Auto Parts Limited Sportsman division. The win was the fourth of the season for the young championship point leader; he won three of the first four races of the season but had been shut out since June 10.

Billington and teammate Mike Parodi had a spectacular fight in the final five laps that appeared to be headed Parodi’s way, but Billington stole the lead in Turn 2 on the last circuit and sped to the victory. Parodi was a season-best second ahead of Brent Warren, Paolo Pascarella, and Adam Piper.

Scott FitzGerald of West Rutland, Vt., was the happy winner of the 15-lap Super Stock feature. After a tough few weeks, the veteran put his car out front to lead every lap and take his second win of the season. He did not have it easy at all, though, as the cars of Jim McKiernan, Garrett Given, and point leader Chris Murray all applied heavy pressure in the last three laps.

FitzGerald streaked across finish line as the winner, with former asphalt racing rival McKiernan a very close second; McKiernan was disqualified in post-race inspection when it was found that his car’s tires were in violation of the rulebook. That moved original third-place finisher Murray to the runner-up spot, followed by Given, Curtis Condon, and Josh Bussino. Joey Trudeau was uninjured in a flip on the second lap.

Kaleb Shepard made it three consecutive wins in the Portland Glass Mini Stock division with a run from 16th place at the start. The Vergennes, Vt., driver raced with his neighbor and good friend Mike Preston for the lead before sealing the deal; Preston was second with Zach Wood third, Dakota Desabrais fourth, and Erin Aiken fifth.

The Mini Stocks had a rough night all around, and only 11 of the scheduled 15 laps in the feature race were completed due to time constraints. Jake Barrows, Johnny Bruno, and Cameron Kennedy each had big wrecks, and Tanner Lunt made hard contact with one of the tow trucks after veering way off the racing surface; there were no injuries in any of the incidents.

Devil’s Bowl Speedway returns to action on Sunday, August 5, with Friend Construction Night. All five weekly divisions will be in action including the Sportsman Modifieds and the 500cc Mini Sprints, the Bandit Youth Mini Stock division is on the card, and the annual kids’ racecar rides event will be held at intermission. Regular general admission is $12 for adults, $10 for seniors, $5 for teens (13-17), and free for kids age 12 and under. Grandstand gates open at 5:30 p.m. and racing starts at 7:00 p.m.