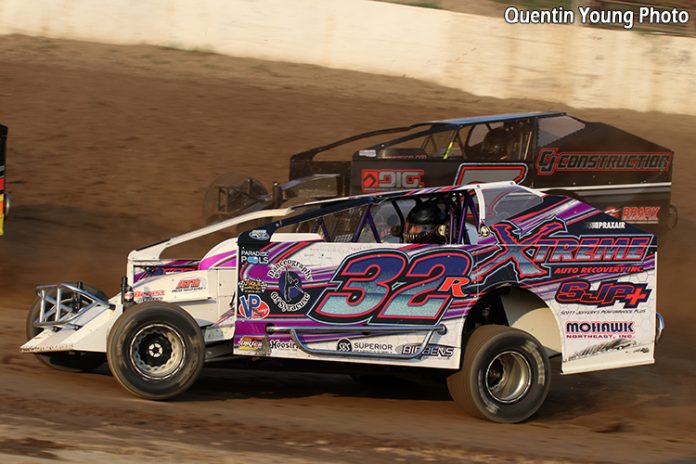 I’m so glad the good meteorologists give percentages when they forecast rain. I didn’t have to miss a single event all weekend because rains fell around my tracks or didn’t come as forecasted at all.

That meant I got to minister at the MDA 100 sponsored by Gillee’s CITCO Lubricants. Brewerton was packed out with DIRTcar 358 Modifieds, Sportsman, Mod Lites, and 4 Cylinder Stocks.

The 100 lapper was a great race with very few cautions which came down to a tight battle between Tim Sears Jr. and Larry Wight. Sears took home the big paycheck while Wight settled for a strong second. A newcomer to the speedway, Gary Lindberg, finished third in lapped traffic.

Another heated battle broke out in the second Sportsman feature between Jeff Taylor and Zach Sobatka. Jeff started on the outside of the front row while Sobatka raced his way toward the front from his tenth starting spot to contend for the lead. Lap after lap these two raced door to door, wheel to wheel with no contact. Sobatka made his final pass and opened up a 0.003 lead at the line as Taylor drag raced him from turn four to the start/finish line. Three thousands of a second isn’t much of a lead, but it was enough for Sobatka to win his second feature this year at Brewerton. Other winners were Mark Yorker in the first Sportsman feature, which came as a sweet redemptive victory. Justin Williams won the Mod Lite main event, with Quinn Wallace taking another victory in the 4 Cylinder Stocks.


Saturday I was off to Fulton for a 50 lap small-block Modifed race. Ronnie Davis III drove a great race to capture his second win at Fulton, and his first in the mini-series.

An exceptionally heavy race track became the equalizer in the crate classes. Ryan Hatherill started on the pole of the first Sportsman feature and dominated until a series of cautions allowed some good cars to catch up to him. The turn four cushion became Hatherill’s nemesis in the final laps that allowed a three way battle to ensue. Jackson Gill and Scott Prentice both put the pressure on each other and eventually on Hatherill as well.

Prentice used his experience to power off turn four from the middle to get by Hatherill for the win, with Hatherill finishing second while Gill held on to third. Former Open Sportman stand out Greg Doust got his first win in the second Sportsman feature after coming out of retirement this year to try his hand at crate racing. Chris Fleming shook the monkey off his back to win his first Late Model feature of the year, while Matt Becker won another Rookie Sportsman feature. Doug Williams won the Mod Lite event.

Sunday I made my way out to Weedsport for the Empire State Challenge. The Craftsman Tools World of Outlaws Sprint Car Series was headlining the event with the second day of a two day Sportsman event. I always enjoy catching up with the Outlaws when they roll into town. Two Lucas Oil Empire Super Sprint competitors showed up with their 360 CI sprints to compete on the dry slick track as well.

The technical track surface bit the incoming Outlaw series point leader when Donny Schatz slid up into the wall in hot laps heavily damaging the right side of his car. After his team thrashed to replace several bolt on parts he was able to time trial on schedule.

Brent Marks took the drive to the peak of victory hill accompanied by Sheldon Haudenschild who did everything he could to catch the leader. Haudenschild settled for a solid second with Jacob Allen rounding out the podium spots in third.

Chuck Hebing was the best of the local talent on this night finishing seventh with, as he stated, “a really good 360.” Mike Mahaney was 14th, Larry Wight 15th, Joe Trenca 19th, and Dave Axton finshed 21st with the only other 360 in the field.

The Sportsman feature was almost predictable, but I did say almost. Kevin Root had the setup for Weedsport this weekend, winning Saturday and finishing second to Dave Marcucculli on Sunday. Root made Marcucculli work for it for most of the race but once the 1m took the lead and got some clean air to run in he opened up the lead enough to secure his win.

Overall, this was a great weekend of racing and ministry. So much is happening behind the scenes it makes me grateful for the opportunity to be available to people in the sport we all love.

Sunday morning I taught about the Person of the Holy Spirit again, with a deep introduction of Him building momentum in the hearts of those that received the message. The only problem is the recording device I use to retain my deleted the message. This is the second time in a row this has happened to me. It makes me wonder if God intended these messages to be for those who came to hear, and for that moment in time in their lives.

The other alternative idea is that I’m not as tech savvy as I could be. I could use some help in that area, and in the musical side of our worship experience as well. Our infant church doesn’t have many people to draw from but the people God has given me are awesome folks. As we grow as a church I hope to grow in those areas so we can use social media outlets better, and more extensively, to broaden our reach.

My last column a few weeks ago began to introduce Holy Spirit and His rolls in the life of a believer. One of the most fascinating rolls He has played in human history is to author the will of God in written form by utilizing people He knew He could trust to scribe His Word during specific moments in time.

“And we have the prophetic word more fully confirmed, to which you will do well to pay attention as to a lamp shining in a dark place, until the day dawns and the morning star rises in your hearts, knowing this first of all, that no prophecy of Scripture comes from someone’s own interpretation. For no prophecy was ever produced by the will of man, but men spoke from God as they were carried along by the Holy Spirit.
2 Peter 1:19‭-‬21 ESV”

In all, 40 authors worked over a period of around 1600 years during a diversity of socio-economic, political, and spiritual conditions. Holy Spirit was there inspiring every pen stroke. That’s why God’s Word is reliable. It’s a container of His eternal nature that gets released into the hearts of those who enrich their lives by it. Jesus Christ said this about it:

“For assuredly, I say to you, till heaven and earth pass away, one jot or one tittle will by no means pass from the law till all is fulfilled. Matthew 5:18 NKJV”

Jesus Christ declared God’s Word as absolute truth that has the power to sanctify us (see John 17:17), which means to set one apart for service to God, the Bible refers to Holy Spirit as the Spirit of Truth. He is the author after all. That’s what sets the Holy Bible apart from other “religious” books. It is the only text referred to as being from divine inspiration by many other religion’s leaders.

Other proof of it’s eternal nature is that it always stands the test of time. It has remained largely the same throughout history with only slight variances due to human expressions of the original languages it was transcribed from. All of this is possible because God, in His sovereignty, has kept His Word by watching over it. In doing so God demonstrates His integrity both in principle and in application.

““For as the heavens are higher than the earth, So are My ways higher than your ways, And My thoughts than your thoughts. “For as the rain comes down, and the snow from heaven, And do not return there, But water the earth, And make it bring forth and bud, That it may give seed to the sower And bread to the eater, So shall My word be that goes forth from My mouth; It shall not return to Me void, But it shall accomplish what I please, And it shall prosper in the thing for which I sent it. Isaiah 55:9‭-‬11 NKJV”

When I consider that Holy Spirit was the inspiring Personality that led mankind to record all God’s intents and purposes, and all His promises I can’t help myself. I get passionate about God’s Word. That’s another work of the Holy Spirit in the heart of the believer. He brings the Word of God to life in us so we have His power to experience everything He said we could do as we become everything He said we could become.

I pray you find time to spend with God while pondering His Word in your heart. I know from experience that when you open your heart to God’s Word the Holy Spirit is right there leading you deeper into your relationship with God. If we can help you in any way shoot me a message on Facebook at Finish Line Chaplain, Kevin Westcott Ministries, or by email at flchaplain@windstream.net. Have a great week! I’ll see you at the track.