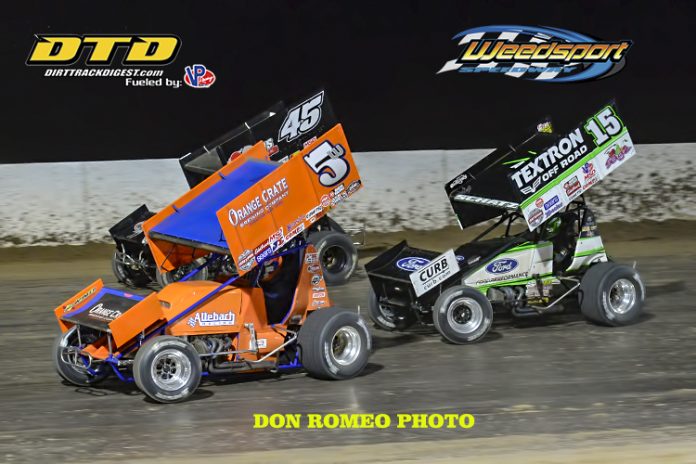 When the World of Outlaws come to town the local 360 delegation is simply supposed to fill the field for the traveling stars.

However, Chuck Hebing turned more than a few heads and had the local fans going wild as the World of Outlaws Sprints made their annual stop at the Weedsport Speedway.

Hebing, one of the most talented 360 drivers in the Northeast, passed Brad Sweet and Shane Stewart to finish third in the dash to put himself in the third starting spot. At the end of 35 laps he was sitting in a very respectable seventh place and at one point midway through the event he was sitting in third and holding off eventual runner-up Sheldon Haudenschild.

Chuck said, “The night started out excellent for us. It was a good start for us in the feature, but the car was far too tight and I couldn’t roll in the corners. I wish I had done a better job with the car, but we were in a mad rush tonight.”

Continuing he explained, “The last 10 laps I was giving up too much track. They (Outlaw drivers) adapted and I lost ground on the bottom. I’ll have to watch the video to see what happened.”

Late in the race he said, “The 15 (Donny Shatz) and I got together and it bent my front wing. So that changed things a bit for me.”

However, he had nothing to be ashamed of and in fact he wasn’t even thinking about racing.

He feels that the seventh place run was solid and explained that it provided some support for the Empire Super Sprints and Patriots who run their 360 series.

Chuck noted, “I really feel it gives credibility to our local racing and shows what we can do.”

Hebing has been a free spirit the past couple of years as he said, “I’ve been racing quite a bit and I had a bucket list of places that I wanted to run. I’ve run in Pennsylvania a little more and I still would like a good run at Knoxville.”

Chuck knew that there might be a need for cars to provide for a full field and said, “The tracks owners are close friends and this is close to home so I supported the show. At lunch time today and dedicated to run tonight. I guess you could say things worked out all right for us.”

Well, thankfully for the local fans he turned out and provided them with plenty to talk about on the night that the 360 finished seventh in the 410 world of the World of Outlaws.