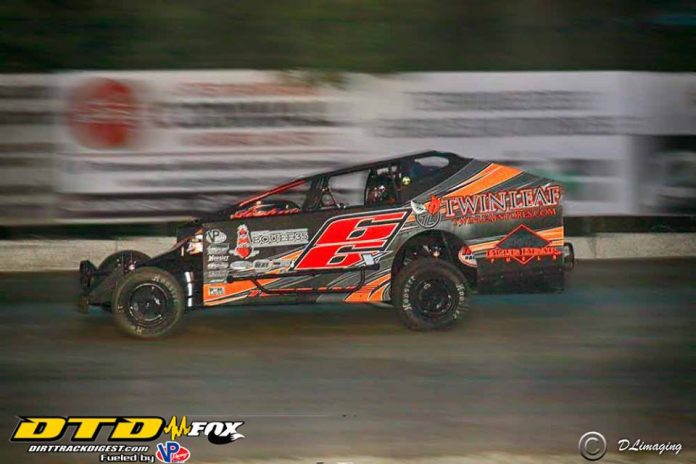 CORNWALL, ONT – Alexandria Home Hardware was on hand to present the DIRTcar Pro-Stock Series along with a complete race program.

Kayle Robidoux quickly got into the lead in the 30-lap Polar Sound DJ Services Modified feature, Robidoux led the first five laps as Carey Terrance used the outside lane to grab the top spot, Kayle Dingwall was also in the mix as he passed by Robidoux for second on lap 8. Terrance lead the way at halfway point with no change in the top 3. Terrance had Dingwall on his back bumper with less than 5 laps to go. Terrance was able to retain the lead and got his second win of the season.

Dan Older and Jocelyn Roy led the field of 19-strong to the start of the Alexandria Home Hardware 50, Roy gaining the lead in front of Older and Stephane Lebrun. Roy gained a good lead over the field as CD Beauchamp passed Lebrun for third. Caution was out on lap 11 as Rob Yetman had engine issues. Roy led the way as Beauchamp moved up to second with Older in third by lap 15. Roy lost his sizeable lead as the feature quickly got to halfway point, when a 5-car accident occurred in turn 4, all cars were able to continue under their own power. On a lap 26 restart, Beauchamp challenged Roy for the lead and took on the following lap as Rock Aubin was also in the mix. Aubin found something at the bottom of the speedway and slipped by Beauchamp for the lead by lap 36. An exciting ending to the race as the last ten laps Aubin, Beauchamp and Roy were racing for the lead. A final lap pass in the backstretch as Aubin was a little high coming out of turn 2 enabled Beauchamp to get side by side and passed him for the lead and went on to get the lead.

In the 25-lap Next Level Improvement Sportsman, Jason Rose got to the lead over Delbert Legrow and Bob Ray. On lap 4. Ray passed Legrow for the lead as Justin Lalancette joined the leaders. Rose had a good lead over the field as Lalancette moved to second at the halfway point. Lalancette set his sights on Rose, he used the outside lane and got closer to the leader with less than 10 laps to go. Both drivers ran side by side for several laps as Lalancette took the lead with 21 laps in the books. Lalancette led the rest of the feature grab his second feature of the season.

The 15-lap Tracy Wheeler Assist2Sell saw Marc Dagenais leading the first lap but got quickly passed by Yanik Potvin that took the lead and built a good lead over the field. Potvin was the class of the field as he won his third feature of the season.

Next week will be one of the biggest events on the season with twin 100s. Both the Canadian Nationals Modified Series and Race for the Cure Sportsman Series will be in town along with a complete race program.