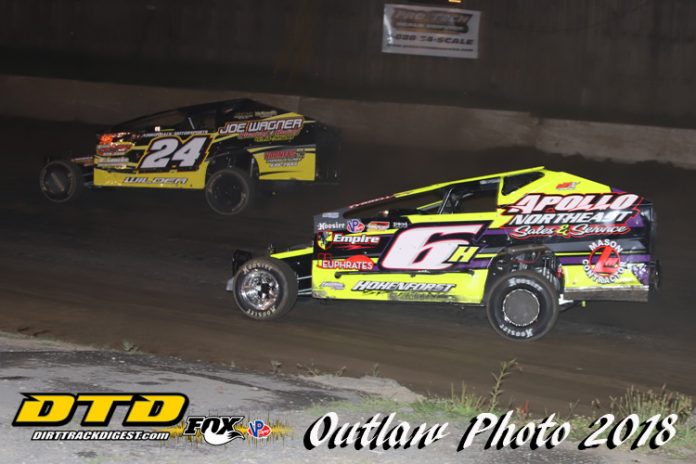 FONDA, NY – Guaranteed starting spots are hard to come by for any big racing events, if there are any even available. In 2018, DIRTcar announced earlier this year that six Super DIRTcar Series events held this season would award guaranteed starting positions to the winners of those events in the NAPA Auto Parts Super DIRT Week 200 to be held this October at the Oswego Speedway.

Included in those six events will be a very special one which will be held on Wednesday, August 1 at the “Track of Champions” Fonda Speedway where the winner of the fourth annual Jack Johnson Tribute event, known simply as “the Jack” will be guaranteed the number 12 starting position in the NAPA Auto Parts Super DIRT Week 200 at Oswego this October, symbolic of the historic car number that Johnson used during his racing career.


Johnson was a two time winner of the Super DIRT Week at Syracuse event back in 1979 and 1984. His victory in 1979 was the first time in the history of the race at that time that a driver from New York State had won the event! He also won three Super DIRTcar Series events at Fonda back in 1976, 1979, and 1980.

In just a few short years, the Jack Johnson Tribute race at Fonda has proven to be one of the most highly sought after victories on the big block modified calendar. With the added prize of a guaranteed starting position in the NAPA Auto Parts Super DIRT Week big block modified finale, spectators at the historic “Track of Champions” will be in for a spectacular show. Previous winners of the event were Stewart Friesen, Matt Sheppard, and Mike Mahaney.

Earlier this year it was also announced that Fonda Speedway would be hosting two Super DIRTcar Series events in 2018, the Jack Johnson Tribute race as stated above, and the second date being Saturday, September 22 as part of the Mohawk Valley Weekend at the “Track of Champions”.