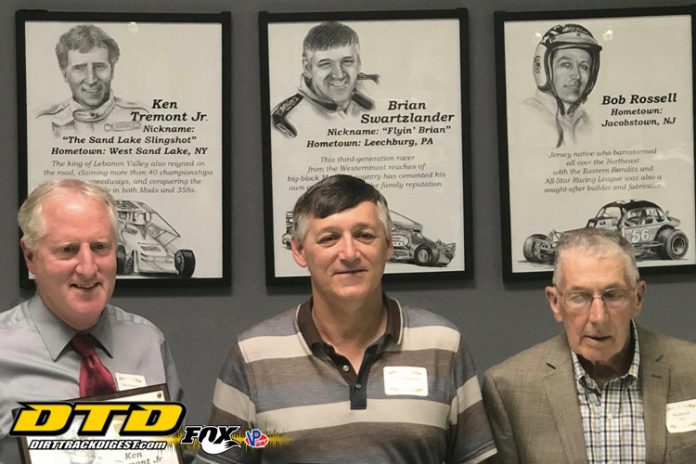 We spend much time looking into the history of our sport so it is only natural that we would be drawn to the Hall of Fames at area tracks. This has been a Hall of Fame week for us. It started at the Northeast Dirt Modified Museum and the 27th Annual Induction Ceremony on Thursday, July 26th. Our next stop was at the 2018 Fonda Speedway Hall of Fame inductions on Saturday, July 28th. To wrap up the week Ed met with a group on Sunday afternoon to discuss the possibility of a Glen Ridge Hall of Fame.

We arrived at Weedsport early enough to speak with many long time friends and some of the inductees. Weedsport Speedway pretty much has to be labeled our field of dreams. The upgrades and changes that have been done the past few years are unbelievable and a giant thank you goes to Al Heinke, Jimmy Phelps and the entire staff of Weedsport. For anyone who is or has ever been involved with a any Hall of Fame you already know how much work is involved. The museum at Weedsport is a shrine to our sport and those involved should be very proud of what they have accomplished. If anyone has a chance to visit the museum it’s a must for dirt fans. Check the website for hours.

Three drivers were inducted, Bob Rossell, Brian Swartzlander and Ken Tremont, Jr. and this was just the driver portion of the inductions. The Hall of Fame also honors many other aspects of dirt racing in the Northeast. New Jersey native Bob Rossell, inducted as the pioneer driver was a member of the famous “Eastern Bandits” who raced up and down the east coast in the sixties. He won several big event during his career including NASCAR’s Battle of Bull Run at Old Dominion, Wall Stadium’s Garden State Classic (twice), Langhorne qualifiers at Flemington and Orange County, DIRT qualifier for Syracuse at East Windsor and was also a member of the All Star Racing League from 1967-71. Bob was also known as a masterful car builder and built cars for many other racers of the day. Bob’s career slowed down but did not end when her was seriously injured at Lebanon Valley in 1971. Bob never officially retired, just put the car on the trailer one day and never took it off.

Brian Swartzlander is the winningest driver on the western Pennsylvania Modified circuit second only to Hall of Famer, Lou Blaney. Swartzlander comes from a racing family, his grandfather and father both raced so it was no surprise when Brian began his career in 1978 in a claimer event. From there his career went to Late Models before making it to Modified in 1989. In his No. 83 Modified he has won numerous track titles at tracks like, Lernerville, Marion Center, Sportsman’s, Tri-City and Sharon and has wins at many more tracks in western PA and Ohio. Ken Tremont, Jr. grew up around race cars, his father Ken, Sr. had owned and fielded cars for many of the well know drivers at Lebanon Valley Speedway near the Tremont home in West Sand Lake. We covered Kenny’s career stats in a previous column so for us to be able to see him inducted into the Hall of Fame was very special and it was no surprise to see the huge contingent of Tremont family, crew, friends and fans that came to celebrate with Kenny at Weedsport last Thursday. It was truly a great night for all who were able to attend.

Ray Bramall was honored with the Gene DeWitt car owner award. Bramall is best remembered by Northeast dirt fans as the owner of the Freightliner No. 6’s driven by Brett Hearn and later Danny Johnson. The teams had the most successful 10-year streak on the DIRT circuit. When MC Shane Andrews asked him what he attributed to their success, Bramall replied, “Money.”

The Mechanic/Engineering award was given posthumously to Maynard Troyer who passed this year on May 10th. Maynard Troyer was known for his driving skills on the NASCAR scene and then started building race cars and became even more well known. On dirt his famous “Mud Buss” revolutionized dirt track racing competition from the first time Alan Johnson won in 1981 and Merv Treichler capped off the season with a win at Super DIRT Week.

The Leonard J. Sammons, Jr. Outstanding Contribution to Auto Racing was given to Gary Spaid. Known at tracks throughout the Northeast Spaid became DIRT’s official handicapper and points keeper under Glenn Donnelly. But that is not all, Gary has written column’s in racing trade papers, magazines and DIRT’s weekly program, DIRT Trackin’ Magazine where he became editor. Spaid also authored “Car Coming” a book on New York State auto racing history. Gary is one of the founders of the Hall of Fame and says his time on the road will end with this season, but he is not retiring from his duties. Don and JoAnn Davies received the Andrew S. Fusco Award for Media Excellence and as we said in our previous column there is no more deserving team. Not only do they write a weekly column for AARN, JoAnn performs duties for many Northeast tracks while never losing her sense of humor. Meanwhile, Don can always be seen walking the pits with his notebook. The Davies’ are true fans of our sport and we congratulate them on this award.

The Outstanding Women in Racing award went to Linda Cosco owner of Humberstone Speedway. Linda and her husband, Pete, bought the track in 2004 and completely renovated the facility and Pete planned to retire and run the track when the time came. Unfortunately in 2014 tragedy hit the family, when Pete suddenly died of a brain aneurysm. Linda took the reigns of the operation and along with the help of her family currently runs regular events every Sunday night.

Saturday we made our way to Fonda for the Hall of Fame inductions and another day of visiting with friends we haven’t seen in awhile. Once again we saw the dedication and work that it takes to present something as big as a Hall of Fame induction and it was a standing room only crowd. Seven drivers were honored.

Don Hendenberg raced at Fonda in the early days, and took home the track championship in 1956 and was on his way to the 1957 title before passing away from an auto accident.
Norm Moyer or “Moyer the Mover” as he was often referred to, drove in the Late Model division at Fonda in the sixties and seventies and took the checker 22 times along with three track titles.

Harvey Brundage was known for his well maintained Late Models in the 1970’s and was the 1972 Late Model champion at Fonda with a career nine wins to his credit. Fonda Modified driver, Mike Romano was a huge Brundage fan and once painted a wall in his room with the No. 91 Brundage coupe.

Todd Hoffman, dominated the Street Stock class at Fonda in the mid-eighties racking up four consecutive titles in 1985, 86, 87 & 88. Hoffman has 51 wins a record that still stands today, 13 wins in one year, another record that no one has broken in any division at the track. Todd’s cars were orange because his favorite driver was Richie Evans. Hoffman is still active today, fielding cars for Ivan Joslin and Justin Knight in Pro Stocks.

Bob VanAernam is fourth on the all-time Street Stock win list with 29 wins and has two track championships in 2003 & 2004.

Bob Vedder retired from racing in 2017 after 51 years behind the wheel of race cars spanning Late Models to Modifieds. He has five wins in Pro Stocks and five in Open Sportsman. Vedder is a true sportsman and anyone who meets him says he always has a smile on his face whether he finishes first or last; he loves racing and the fact that he can have fun no matter what, says a lot about the racer from Schoharie. This past January Bob received the Dedication to Racing Award in Memory of Harry Peek from the New York State Stock Car Association.

Car Owner awards went to Bob and Karolann Grimm owner of the No. 22 of Dave Lape from 1978 to 1981 winning nine features with Dave Lape as their driver.

Bob Siemski was a winner in business, and in racing in cars and horses. Bob was the owner of the car driven by C.D. Coville when he won the Eastern States event at O.C.F.S.

Tom Spencer has owned cars that raced at Northeast dirt tracks for many years having fielded cars for Tim Clemons, Ray Dalmata and A. J. Romano with many successes. Tom returned to racing a few years ago and is currently the owner of the 602-Sportsman driven by Chad Edwards.

The “Track Contributor” award went to Peter “Junior” Bianco lifelong sidekick of Lou Lazzaro and a friend to the entire Lazzaro family according to Lou Lazzaro, Jr. who was on hand to present the award to Junior. When Lou began racing, Junior was there and they remained together through thick and thin. Many competitors of the day can attest to hearing the two screaming and yelling in the pits and in their garage in Utica, but things always worked out between the two true friends.

Track Personnel award was given to first Fonda Track photographer Russ Bergh of Middleburgh, NY. Many of the black and white photos on the wall of the museum are from the Bergh collection. Also receiving the Track Personnel award was Terri Mohrman, safety crew leader at Fonda and a true friend to all the racers or anyone who needs her help. Terri has been on the safety crew at Fonda for 35 years and has done her job with upmost professionalism. Terri has probably saved many lives at Fonda over the years and on Saturday two of those thankful for her professional help were on hand with testimony to her dedication and to thank her for saving their lives. Dave Spaulding, midget driver, thanked Terri for her life saving efforts when he was involved in a horrific crash that threaten his life. Crew member, Cliff Montanye, Sr. thanked Terri for her quick response when he was stricken with a heart attach while running to victory lane one night. Terri received a standing ovation from the crowd in attendance at the museum on Saturday.

The 3rd Annual Bruce Dostal- Dedication to Fonda Speedway Museum award went to Brian Hananburgh who founded the original museum in his Fultonville McDonald’s, Ed & Betty Biittig, the first curators and Ray Rogers, current day contributor, Peter Schwab and Jessica Lape who stepped in and took over duties at the museum in the absence of Dave and Jackie Lape while they dealt with medical issues this past year.

After a week of remembering with friends at these two events we want to say that the racing community in New York is very fortunate to have both of these facilities to preserve the history of racing and we should all thank those dedicated volunteers who make all this possible.

We alway say that we have fun at Glen Ridge each Sunday and this must also be true for the nearly ten retired drivers in attendance enjoying an evening of great racing. They all seem to agree that The Ridge has some great entertainment and everyone was enjoying the night. New this week, Andy Graves made the move from Cruisers to Pro Stock.