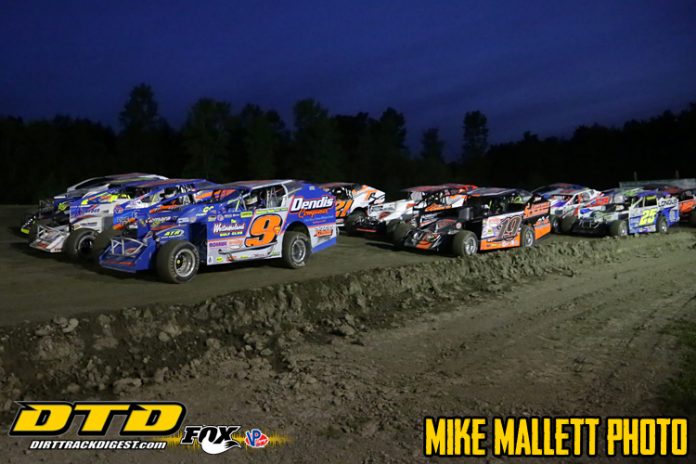 It looked like it was all over Tuesday night at the Airborne Park Speedway as Matt Sheppard came under the dual flags of Super DIRTcar Series starter Dave Farney indicating there were two laps to go. He had checked out with Danny Johnson solidly in the second spot. The next time Sheppard crossed the start finish line the yellow flag, not the white was being displayed.

That caution changed everything. Sheppard, who led a race high 98 laps to that point, was now forced to deal with a challenge from Johnson. It was evident that Johnson had a fast car as he we closing in on Sheppard in the final few laps but the lead seemed to be insurmountable. That was until the caution.

On the restart Johnson dove directly to the bottom of the first and second corners pulling even with Sheppard. He completed in turns three and four. Just like that, the fortunes of both drivers changed. Johnson scored the win while Sheppard had to settle for second.

“I was hoping I was going to get him, but I don’t think I would have got him if it wasn’t for that restart,” stated Johnson. “I think if he stayed on the bottom I probably wouldn’t have gotten him either. My car stuck good on the bottom and I was able to get him.”


Johnson knew what to expect from Sheppard as he watched him the whole race plant his No. 9s on the top of the speedway. He also knew how good his car was on the bottom.

“It was getting better during the race,” he said of the bottom. “That is where second has the advantage. I was watching him throughout the race so I knew that was kind of going to be his line because he did it the whole race. My car was actually good off the bottom so it worked out for me.”

Johnson was ecstatic for the team as they’ve quickly come together after uniting only a few races before. On this night his car was good, but he feels like he has some more room to get better with the Graham Racing Troyer.

“We have room for improvement yet,” he said with a smile. “I was going to cry about a couple things. I still will, but it’s all good.”

Sheppard, although he finished second, gave all the praise to Johnson for beating him out of the end of the race. He simply got beat by a better car on this night.

“All-in-all I think if Brett (Hearn) doesn’t bring the caution out we still win the thing,” commented Sheppard. “There is no doubt that Danny was the best car at the end of that race. He had a little bit of fortune to go along with it. He beat is. That is all there is to it. That is the way it rolls sometimes.”

He knew that the restart could be a problem.

“I had a bad feeling about the restart,” mentioned Sheppard. “I knew my car was fading and I felt like it was fading quite a long time before that. I’m actually surprised we lasted as long as we did. I actually thought we were going to pull a rabbit out of the hat there and win a race we probably shouldn’t have won. The caution changed all that.”

Tuesday was Sheppard’s first ever visit to the Plattsburgh, N.Y., oval as last year’s event fell during his suspension from series competition. As a result, he made a couple of setup choices that didn’t end up working out in his favor.

“We didn’t do ourselves any favors with our car setup even though we held on for a long time,” cited Sheppard. “We definitely didn’t tighten up enough. The right rear 400 at the end definitely wasn’t helping us. Danny had a softer tire on. Once the track got slow and slick enough the harder tire was actually too hard.”

McLaughlin Continues to be Consistent

As has been the trend this season, Max McLaughlin had another consistent run. The youngster from North Carolina picked up his seventh top five finish of the season with the Super DIRTcar Series. McLaughlin took advantage of a few of the longer runs in the race to make it to the front after starting 10th.

“This car has been so good on the long run,” cited McLaughlin. “Every week we are contending for a top three. We lost third spot at Drummond on the third green-white-checkered. We were a third place car there, second or third place car at Granby before we got taken out. I can’t say enough about our cars. They are really fast right now. I’m happy to be able to drive them.”

Like so many others, McLaughlin felt like his mistake on the night was tire selection. Had it not been for that, he believed he would have been contending for the victory.

“Tonight we picked the wrong tire once again,” admitted McLaughlin. “I told myself not to do this coming here, but I talked myself out of it again. I think if we could have picked the same tire Danny was on we would have had a better shot at him. We were still right there.”

Rudolph Falls off at End

Erick Rudolph continued his impressive Super DIRTcar Series tour debut with another top five effort. The Ransomville, N.Y., pilot continues to stay consistently nearly the front. He hung with Sheppard for much of the first three-quarters of the race only to fade in the final few. He wasn’t sure why.

“The car just kind of gave up with 10 or 15 laps to go there,” stated Rudolph. “I’m not sure what happened. It is our first visit here so I can’t complain too much about top five I guess. It’s been a while since we’ve had a run that was sub-par, that you would chalk up as not good. We’ll take this, learn from it and next year we’ll have a notebook now.”

Jimmy Phelps struggled for much of the night before finally getting things rolling in the feature. Phelps timed poorly, missed the redraw and as a result started the race from the inside of the sixth row. He ended the night as the final car in the top five.

“The way we qualified and the way we come off the truck, if someone said you’ll come out of here with a top five I’d have said I’d be happy with that,” said Phelps. “I’m happy. We just never found the balance all night. We’ll take a top five coming to a track where we’ve never felt comfortable the few times we’ve been here. Grab a top five out of here and move on.”

His HBR team is still trying to find the right feel for Phelps. They need to find something a little different when they face track conditions like they faced on Tuesday at Airborne.

“There has been a few tracks here along the way that we are on to some good stuff, but we haven’t had enough experience getting it freed up enough when we get on these tracks when we are just too stuck,” cited Phelps. “Even at the end it was hard to turn in. It made you have to over drive. I’d have two out of every five laps that I’d hit it right and make ground up.”

Sheppard was quickest overall in time trials with a lap of 16.233…

Stewart Friesen had terminal rear-end issues during the second heat race. He pulled up lame while leading and coasted into the infield. His night was over…

Jessey Mueller and Brett Hearn had their nights ended on the end of the hook. Both drivers collapsed front ends during the main-event giving up possible top 10 finishing spots…