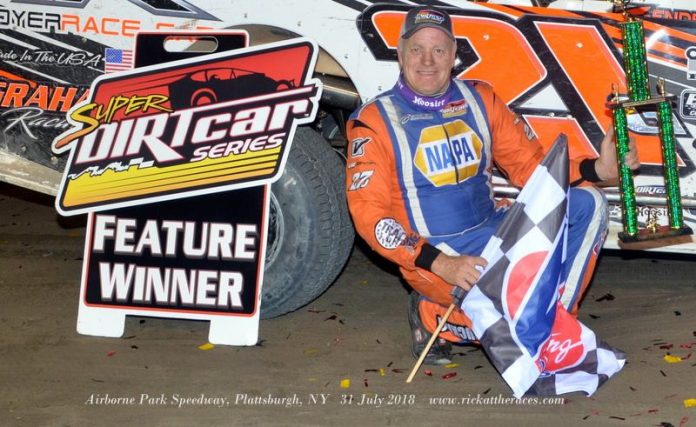 PLATTSBURGH, NY –  Matt Sheppard dominated the Battle of Plattsburgh 100 at the Airborne Park Speedway, but unfortunately leading the most laps doesn’t always mean you end up in Victory Lane.  That was exactly what transpired on Tuesday night as Sheppard led 98 of the 100 lap affair.  Danny Johnson led the other two, including the final one to score his second Super DIRTcar Series win of the 2018 season.

The win came only a few weeks after Johnson destroyed his No. 27J in a horrible crash at the Orange County Fair Speedway.  He thought his season was over before the Graham Racing team stepped in and gave Johnson a ride for the rest of the 2018 season.  Johnson obviously made the most of that opportunity.

“It’s great for my team,” said an all smiles Johnson after winning $6,000.  “I appreciate Ray Graham and Peter Britten for allowing me to get into their team. I got to thank Billy Colton and Kevin Enders for helping us get the car ready last night. They were at the shop with the rest of the crew. It was a team effort.”

Sheppard, by virtue of the redraw, opened the race from the pole position.  He quickly asserted himself as the class of the field in his first visit to the facility.  At times he amassed a straightaway lead over the rest of the field.

His lead was nearly that as the first caution on lap eight as Mikael Labreche came to a stop on the back straightaway.  On the restart it was more of the same as Sheppard kept the top spot while Erick Rudolph took over second from Rich Scagliotta.

While Sheppard and Rudolph worked out in front, Johnson was advancing through the field after starting in position seven.  By lap 30 he had moved his way all the up to third.  That is where he would stay for a majority of the race with Sheppard and Rudolph setting the pace.

Sheppard continued as the race leader as he kept everyone at bay on multiple restarts through the mid-portions of the race.  Each team it was Rudolph holding off Johnson to continue his second place effort.  As the race continued on track conditions began to change in Johnson’s favor.

Johnson started his assault on Rudolph with 10 laps to go.  He tried and tried before finally taking over the runner-up spot in the running order on lap 95. Johnson dove low off the exit of turn two to take the spot foreshadowing a move he would end up making later in the race to win it.

On lap 98 Brett Hearn’s night came to an end as he came to a rest on the top-side of turns one a two with problems on the frontend of his No. 20.  This gave Johnson his shot at Sheppard.

At the green Sheppard went right back to the line that proved to be successful for 98 percent of the race while Johnson dove to the bottom of turns one and two.  He pulled even on the backstretch before completing the pass in turns three and four to take the lead on lap 99.

“The caution came out there and gave me a chance to come up on his (Sheppard) bumper,” mentioned Johnson.  “He chose the high lane. I went down to the bottom. The car stuck and the rest is history.”

Sheppard methodically worked the top lane the entire race.  That ended up costing him at the end oas he failed to realize that the bottom lane had improved.

“Starting on the pole, sometimes that’s good and sometimes that’s bad,” commented a disappointed Sheppard.  “I knew the top would probably give up sooner or later. I thought we were going to make it to the finish, but that caution at the end did us in.”

Coming off a strong run in the 2017 edition of the race, Max McLaughlin rounded out the podium at the checkered flag.  The Mooresville, N.C., driver continues to be consistent on the series finishing near the front on a regular basis.

“We struggled at the beginning of the race and I found that bottom groove early,” stated McLaughlin.  “I was kind of stuck there all night.  It was good on the tires so it allowed us to be there at the end. We had a really good car. We’ve had a couple wins and we’re knocking on the door of our first Series win.”

Rudolph faded late in the affair after holding his own against Sheppard to finish fourth while Jimmy Phelps powered forward from 11th to complete the top five.