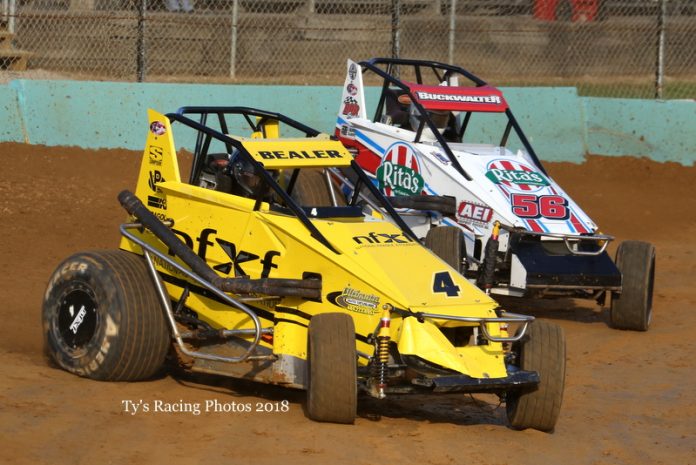 KUTZTOWN, PA – His best finish of the season (fourth on July 11) really did not show just how much progress Pat Bealer has made in his first year of USAC All Pro SpeedSTR competition. On Wednesday, August 1st, however, in the Troy Moyer Memorial, Bealer’s improvement was on display for all to see as the Walnutport, PA throttle-jockey won his first SpeedSTR main event in a thriller over Steve Buckwalter at Championship Energy Action Track USA on the Kutztown Fairgrounds.

The wingless 600 Sprints opened Hyper Racing 600 Speedweek at Action Track USA on Wednesday, with “the Phenom”, Alex Bright, taking advantage of Tim Buckwalter’s misfortune to win his second race of the season.

The All Star Slingshots tried to kick off their Speedweeks Tour, too, but Mother Nature had other plans as torrential rain hit the speedway with five laps complete in the Slingshot main, forcing its postponement. A make-up date, on which the race will resume with five circuits in the books, is being discussed and will be announced on August 3rd. Cody Kline had just taken the lead from Nick Vinciguerra when the yellow flag waved, and the massive storm moved in while the cars were circulating the speedway under the yellow.
Shelby McLaughlin, last year’s Junior Slingshot Nationall Champion, captured the 15-lap feature for the Juniors on Wednesday evening.

The Troy Moyer Memorial for the SpeedSTRs quickly turned into a classic, with Steve Buckwalter starting on the pole and leading the early laps. Matt Janisch, Jeff Hartman, and sixth-starting Pat Bealer battled for the runner-up position, with Bealer emerging from a three-wide engagement to snare the spot on lap four. He then stalked the race leader for several laps before pulling alongside S. Buckwalter to challenge for the top spot.

On lap 14, teenager Alex Yankowski slipped past Janisch for third, then watched as Bealer began to swap the lead with Buckwalter. They took turns leading laps 15 through 17, with Bealer nosing in front on the 17th, 18th, and 19th circuits. Buckwalter, running the top at both end of the race track, forged ahead once again to lead laps 21 and 22, but Bealer would not go away. The 270cc Micro Sprint veteran shoved the nose of his No. 4 back in front the 23rd revolution, but Buckwalter was scored as the leader on the 24th trip around the oval.

Steve Buckwalter would set the pace for the next three tours, but Bealer roared off the inside lane of turn four to lead the 27th lap. He kept the nose of his car ahead of Buckwalter – barely – during the final three circuits to score the popular win by a scant margin – 0.045-seconds – over Buckwalter’s Rita’s Italian Ice No. 56b.

Yankowski was right behind the lead duo for several laps, but he could not find the opening he needed to make it a three-car tussle for the win. He settled for third in just his third start in a SpeedSTR, with Matt Westfall rumbling from 13th to fourth and Tom Mayberry slicing his way from 19th on the starting grid to a fifth-place finish.

The Hyper Racing 600 Speedweek Opener, a 35-lap jaunt with $1,500 awaiting the winner (with Gambler’s Fee), had a front row of Tim Buckwalter and Billy Pauch Jr. leading the field to green. While they dueled for the race lead, Jason Swavely was fending off attacks from Alex Bright, Kenny Miller III, and Jay Hartman to maintain third position. Swavely then moved up to dice with the lead pair before Pauch pulled away by a few car lengths. Buckwalter fought off the assaults from Swavely, then launched his No. 71 off turn four, dashing past Pauch and leading laps 11 and 12.

A restart with 12 complete saw T. Buckwalter’s car drift up the banking as he hit the accelerator, permitting Pauch, Swavely, and Alex Bright to get by him before he could recover and get back in line. But Buckwalter’s car was incredibly good on the bottom, and he rebounded quickly by passing Bright and Swavely, then bounced off Pauch’s wheels on the front stretch to lead once again on the 16th revolution.

With Buckwalter leading Pauch, a three-car dance developed for third between Swavely, Bright, and Miller with Bright claiming the spot just past the halfway mark of the 35-lapper. Bright then blasted by Pauch for second on lap 21, with Miller wrestling third from Pauch on the 25th tour. Buckwalter appeared to have things well in hand, but disaster struck with seven to go when he mysteriously spun, all by himself, in the middle of turns three and four. He later disclosed that his motor suddenly “locked up”, causing the spin.

Bright inherited the lead at that point, but Miller wouldn’t let the Collegeville, PA wheel-twister waltz to the triumph. The pair ran side by side for a few laps until Bright motored away, winning by several car lengths over Miller, Pauch, Jay Hartman, and 20th starter Kyle Spence.

“We set the car up to be good at the end, and we certainly were,” explained Bright. “But Timmy (Buckwalter) was really fast, and I’m not sure we would have caught him if he didn’t have trouble. Adam Huff (his car owner) gives me a great piece each week and I’m happy to drive it for him.”

Miller was happy about his runner-up effort and all the support he gets from his family and friends, while Pauch lamented the choice of right-rear tire made by he and his team. “We went too soft, and I was junk from about lap 12 on…”, said the Milford, NJ driver, who still salvaged a good points night, extending his lead in the standings over Colin White to 174 points.

Scranton, PA’s Shelby McLaughlin has come very close to winning at Action Track USA, finishing among the top three on several occasions when the Junior Slingshots are on the schedule. On Wednesday, she finally broke the ice, leading all the way in the 15-lap Junior Slinger feature to win handily over Tyler Ulsh.

Jacob Taylor and Kasey Huffcut battled for third throughout the race, with Taylor eventually separating himself from Huffcut near the end to finish third. Huffcut and Logan Bauman completed the top ten.

Extra money was raised and donated to the All Star Slingshot purse by Esterly’s Sandwich Shop to honor the memory of Troy Moyer, the Mertztown Sportsman Modified racer who was stricken with brain cancer and passed away while still in his 30’s. His sister Michelle, the mother of Slingshot champion and SpeedSTR driver Dylan Hoch, presented the extra cash to co-promoter Doug Rose and also gave some extra money to Mike Knappenberger for use in the Race Chasing bonuses given to drivers in each division.

The Ellickers, who held a pre-wedding party at the track in 2016, returned to present Hyper Racing 600 Sprint winner Alex Bright with an extra $300 for his win in the 600 Speedweek opener.

A wild flip by Kyle Lick on lap 28 of the 600 Sprint main left the Scott Rupp No. 53 with heavy damage, but Lick was not injured in the crash on the backstretch.

Tim Buckwalter (defending SpeedSTR champion), Billy Pauch Jr. (current point leader and two-time champ), and recent winner Briggs Danner were involved in a pile up on lap seven of the SpeedSTR feature. Buckwalter and Danner later tangled again, but Buckwalter persevered to finish 12th while Danner fell out and was credited with 16th place. Pauch Jr. soldiered to a seventh place payday. Steve Drevicki was also involved in the first tangle, but continued and finished 11th.

2016 SpeedSTR point champ Billy Pauch Sr. was back behind the wheel of a Mike Heffner owned No. 27SR on Wednesday. Pauch stepped away from SpeedSTR competition after his championship season, but decided to run a few races this year with Wednesday being his initial start of the campaign. He suffered a flat tire in the feature and fell out of the race. Pauch Sr. will return to action this Sunday in the Dick Tobias Classic.

Aiden Donaldson flipped in the Junior Slingshot feature and Steven Nederostek was also a flip victim in his SpeedSTR heat race. Both drivers were unhurt, just a bit shaken and sore.

This Sunday, August 5th, is the sixth annual Dick Tobias Classic at Action Track USA. The USAC SpeedSTRs will go 75 laps with $5,000 going to the winner. The Hyper Racing 600 Speedweek finale` also takes place, with $1,500 waiting for the winner (with Gambler’s Fee) in a 35-lap main event. The overall Speedweek Champion will also be determined on Sunday, and there is a $2,000 check ready for the driver who scores the most points in the five race Speedweek series. The All Star Slingshots will run a 40-lap feature as part of the Dick Tobias Classic, with every Slingshot entering the event guaranteed to start the main.
Adult General Admission tickets are $20 for the Tobias Classic, with grandstand gates opening at 4 p.m. Warm-ups get underway at 5:15, and qualifying events go green immediately following the hot lap sessions. Sunday, August 12 is the rain date for the Dick Tobias Classic.