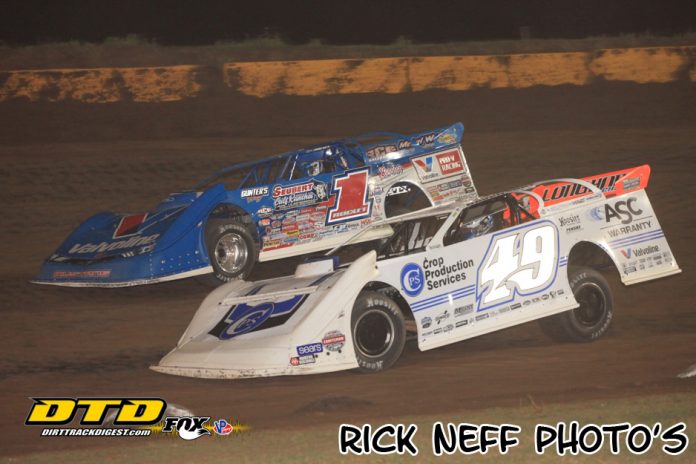 NEW RICHMOND, WI The 31st annual USA Nationals weekend kicked off on Thursday, August 2nd at the immaculate 3/8s-mile of Cedar Lake Speedway (WI) located just across the Minnesota/Wisconsin state line and northeast of Minneapolis, MN in New Richmond, WI. The first of three nights of racing for the World of Outlaws® Craftsman Late Model Series, would see the teams vie for a $6,000 to win payday and some important track time in anticipation of Friday and Saturday’sshow. After swapping the lead back and forth several times over the coarse of the race, Brandon Sheppard slipped by Jonathan Davenport for the final time coming down for the checkered to secure his 10th Feature Win of the season.

“Yeah that was fun! It was hard to know where to be most of the night, but we found a good groove in the middle of the track. I knew J.D. (Jonathan Davenport) was going to the top. He kept getting a run on me up there, but we were a little bit better in the middle.” Explained the 25-year-old driver of the #1 Seubert Calf Ranches / Rocket XR1 Chassis / Durham Racing Engines machine. “I was pretty lucky that I could stay up to his quarter panel, so that last lap I was able to get a good run on him. I wasn’t too sure I could get by him there at the end though. But, I was able to get into the corner with both rear tires and get gripped up really good and it just worked out for us.” He added.

In continuation of the Outlaws “Week of Wisconsin” road trip and the series’ 24th all-time appearance at Cedar Lake, it would be Davenport and Madden bringing the stellar 24-car field to the green flag for the 40-lap Feature and it would be Davenport powering his way to the front to lead the opening lap. Sheppard, who started right behind Davenport in third, was also able to get past Madden to place himself in second and set his sights on Davenport. On lap four, Sheppard maneuvered around the outside of Davenport to take the lead only to lose it back to Davenport two laps later. Sheppard regrouped on the next lap and retook the lead and pulled away from Davenport and the rest of the field.

Davenport lost the second spot to 2017 rookie of the year and PFC Brakes Fast Qualifier, Devin Moran on lap 11, but would regain the runner-up spot on lap 25 and reset his sights back on Sheppard. With three laps to go, Davenport pulled up along-side Sheppard and retook the lead again, but Sheppard stayed next to Davenport as the crowd rose to their feet over the closing laps. Davenport tried to hold back the continued advances of Sheppard, but the defending series champion was up to the task and with one final push, Sheppard edged back out ahead of Davenport and beat him to the line as the checkered flag flew by 0.266 seconds to score the thrilling victory.

For Sheppard, this is his 10th win of the season and 34th of his Outlaws career to move him to within three of fifth place all-time behind 2011 series champion, Rick Eckert who has 37 career Feature Wins. It was three races ago back on July 10th at Black Hills Speedway (SD) when Sheppard scored his 32nd career win to move him ahead of another former series champion, 2004 titlist, Scott Bloomquist to move into sixth all-time on the career wins list.


For the second race in a row, Davenport recorded a podium finish, this time one spot better than just two nights ago at Shawano Speedway (WI) where he finished third. This time, the Blairsville, GA driver in his #49 Crop Production Services / Longhorn Chassis / Cornett Racing engines entry settled for the runner-up spot. “Brandon (Sheppard) and I always race good together, we race hard and we race each other clean. I had him passed a couple of times and I could just about always get a decent run coming out of the corners. Stated the 34-year-old driver in the pits after the post-race ceremonies. “I tried to take his line away, but he knew what he was supposed to do there at the end and he did it. We know we can be better. We’ve got a good idea now of what we need to do for the rest of the weekend.” He smiled.

Recording his fifth top five finish in a row, Moran came home with a third place showing in his #9 Tommy Pope Construction / Rocket XR1 Chassis / Clements Racing Engines ride. For the 23-year-old, his battle was first with Davenport for second and then later in the race, for the third spot with 17-year-old Hudson O’Neal. “We were side by side with Hudson (O’Neal) for about 15 laps and that was a lot of fun. But we just have to work a little harder to get up to those two guys up front.” Stated the Dresden, OH driver. “We’re here to run good and win races. We learned something tonight and I feel like we can put that in our notebook and go after $50,000 on Saturday.”

O’Neal notched a career high in Outlaws competition, fourth place showing in his 11th career series appearance as Jimmy Mars rounded out the top five. Madden finished in sixth but took over the points lead outright while Chris Simpson advanced 10 spots to score a seventh place showing ahead of Ricky Weiss who picked up 11 positions to finish eighth. Brian Shirley was ninth as Jimmy Owens completed the top 10.

Earlier in the evening in PFC Brakes Qualifying, Moran won his third in a row, sixth of the season and ninth Fast Qualifier award of his career with a 13.563 over the 45-car field. Madden, Sheppard, Davenport and Babb won Qualifier Heat Races while Chris Simpson and Billy Moyer picked up the wins in the Last Chance Showdowns.

The World of Outlaws Craftsman Late Model Series continues the Week of Wisconsin on Friday, August 3rd with Qualifying night featuring the unique Double Heat Races format. Passing points will be accumulated based on positions gained in the two heat races each competitor competes in during the night. The top 16 drivers with the most passing points will be locked into the Feature on Saturday. Additionally, the top eight (8) drivers within the top 16 will race in the USA Nationals Dash to compete for starting spots in the top four rows of the $50,000 to Win Sears Craftsman Feature on Saturday. Also, on Friday night, the traditional FANS Fund Dash will close out the evening of racing.

Then on Saturday, August 4th, it’ll be the Last Chance Showdowns followed by the $50,000 to Win USA Nationals that will wrap up the race weekend in the Cheese State. Don O’Neal pocketed $50,000 for his USA Nationals victory in 2017 while Chris Madden grabbed the checkered flag on preliminary night. Overall, three-time series champion, Billy Moyer leads the way with seven career wins at the track including five career USA Nationals titles while four-time series champion, Josh Richards has three career triumphs as two of those wins have come in the USA Nationals. Jonathan Davenport has two checkered flags as he swept both the prelim night and the USA Nationals in 2015 and now Sheppard has two wins, both coming on Prelim Nights.

There are 11 other drivers who have at least one victory with O’Neal, Jimmy Owens, 2006 series champion, Tim McCreadie, three-time series champion, Darrell Lanigan, 2004 series champion, Scott Bloomquist and Dale McDowell all getting their wins in the USA Nationals. Madden, Jimmy Mars, Donnie Moran and Rick Egersdorf have all scored victories at Cedar Lake as well.

For more information and to purchase tickets for the 31st annual USA Nationals, click on the website located here: clstickets.com/tickets.asp You can also find out more information about Cedar Lake Speedway by going to the track website at: cedarlakespeedway.com