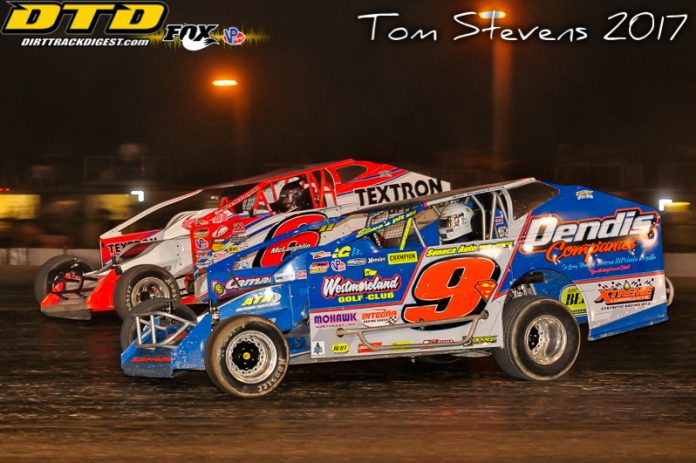 CONCORD, NC – Just before the Super DIRTcar Series takes its August break, the Big-Block Modifieds will saddle up and ride west to a pair of classic Series race tracks on the Series schedule since the early ‘70s. Harvey’s 100 takes place on Monday, August 6 at Merrittville Speedway, in Thorold, Ontario; and the next day, Tuesday, August 7, the Series rolls into Ransomville (NY) Speedway for the Summer Nationals.

The top three in points are currently Matt Sheppard, Erick Rudolph, and Max McLaughlin. These two races are crucial to the Championship points standings as the teams will not compete again until September 1 at Lebanon Valley Speedway for the Mr. DIRT Track USA 100. The layover will give the teams time to massage the kinks out of their racing machines and prepare for the final run through September, NAPA Super DIRT Week XLVII in October, and then the World of Outlaws World Finals in Charlotte to close the season. But first, the Series will complete its Western Swing.

Merrittville Speedway has been hosting Super DIRTcar Series events since 1972, when the Series first got its start. Legend Will Cagle took the checkered flag in the inaugural Series race at the Canadian track. Since then, 33 Series events have been held on the 1/3-mile bullring.


The next day, the teams and drivers will cross back over the border into Niagara County, NY to take on the tricky half-mile Ransomville Speedway for the Summer Nationals 100-lap event.

Some call the narrow, high-banks of Ransomville Speedway the Darlington of dirt tracks, while others simply call it, “The Big R.” The half-mile is fast and tricky for those unfamiliar with its characteristics, but drivers like Danny Johnson, who has mastered the art of dipping into “the moat” on the front stretch, know the fast way around the western New York dirt oval.

Ransomville Speedway has hosted Super DIRTcar Series races since 1973 when Jumpin’ Jack Johnson crossed the finish line first to claim victory. Since then there has not been a single dominant force at Ransomville in Series races. Brett Hearn, Danny Johnson, Alan Johnson, and Bob McCredie are all tied with four Series wins each. Billy Decker holds the track record after clocking in a 16.034 second lap back in 2014. Sheppard took the checkered flag last year and will look to repeat in 2018 to hold on to his Championship points lead.