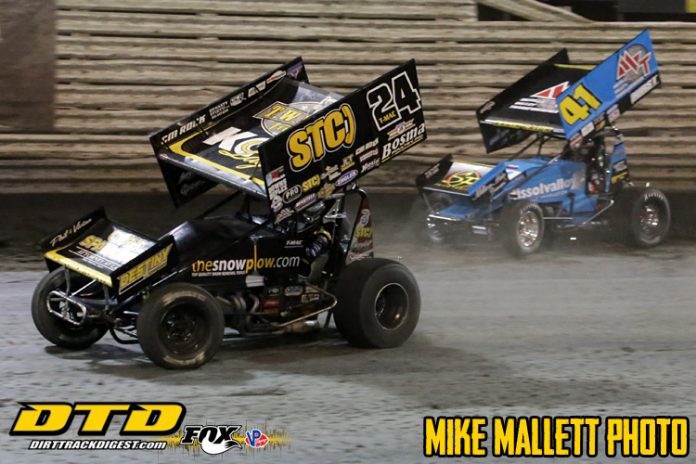 KNOXVILLE, IA – The final night of the 28th running of the Knoxville 360 Nationals is upon us. So far the two day affair has been full of surprises and emotion with Thomas Kennedy becoming the first Canadian born driver to win at the Nationals on Thursday while Carson Macedo had an emotional win on night two driving Jason Johnson’s No. 41. As we enter Saturday night, the question remains who leaves as the 2018 champion and $15,000 richer?

Before we get into the prediction, here is a pictorial walk through the 20 starters locked into the 25-lap finale on Saturday night. A-Main Prediction: Nearly every driver starting in the first four rows of the finale has a ton of 410 experience under their belts making picking a winner difficult. The past several events have also been won from the front row. That fact leaves Joey Saldana and Giovanni Scelzi as likely candidates to end up in Victory Lane after the final checkered flag.

Although Saldana would be, and is the safe pick, I’m going to say its someone from the second row. Brian Brown starts fourth in the main-event and he’s going end up being your winner. He’s been dominant whenever he’s been at Knoxville in 2018 and I believe that dominance continues as he will win his second career Knoxville 360 Nationals on Saturday night. His first and only Nationals triumph came back in 2014.

Things to Watch: Carson Macedo is without a doubt the sentimental favorite. It would continue the storybook run that happened on Friday. Then there is also Sammy Swindell. Swindell last won the 360 Nationals in 2016. He had an amazing race car on Thursday night coming from mid-pack to nearly win. He proved, that even at 62-years-old, he’s still got it.

Northeast Connection: Three drivers that have a Northeast connection are on hand.  This includes Ohsweken Speedway regular and champion Dylan Westrbook.  Westbrook got better each time on track.  He’ll go off from 19th in the C-Main. (Full story on his qualifying night will be posted on DTD)

Scott Kreutter had a day to forgot.  His time trial lap was disallowed after he failed to make weight.  That put the former Patriot Sprint Tour Champion way behind.  He has a long way to go Saturday night as he’ll go off from last in the E-Main with his Trey Hoddick owned No. 49.  Kreutter’s teammate Trey Starks made the A-Main and will start 20th.