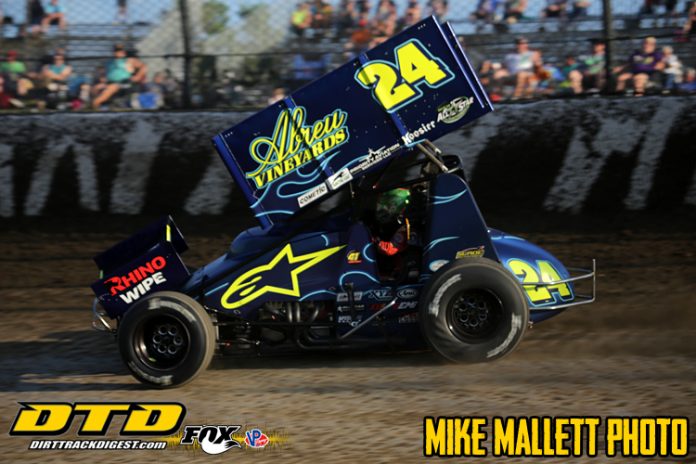 PEVELY, MO – Rico Abreu took the lead away from Kraig Kinser on Lap 21 and held off charges from Tim Shaffer and David Gravel to win his first World of Outlaws Craftsman Sprint Car Series Feature of the 2018 season. Abreu survived two Gravel slide jobs in the closing laps and held off the Connecticut driver for his second consecutive Ironman 55 triumph for a $20,000 payday. Jacob Allen completed the podium.

Abreu won the Sears Craftsman Dash to earn the pole for the 55-Lap Feature, alongside Outlaw veteran Kraig Kinser. Kinser got the jump on the initial start and powered away in search of his first victory of the season.

Kinser reached lapped traffic on Lap 5 on the high-banked ¼ mile and negotiated it well, establishing an early lead.

The ensuing restart saw Kinser and Abreu exchange slide jobs for the lead with Kinser holding the lead on Lap 20, but Abreu wrestling it away the following circuit.

Brent Marks brought out the caution on Lap 27 with a flat right rear, setting up the first of many double-file restarts where Abreu would be in control. Each time, Abreu elected the bottom.

Tim Shaffer, who originally started 12th, charged from fourth on the restart to second and took a look under Abreu for the lead with a brilliant restart, but settled for second as Abreu powered away.

The action was halted for Hunter Schuerenburg, who got upside in turn two, on Lap 33. Schuerenburg was uninjured but was done for the event. Turn two proved treacherous for both Paul Nienhiser and Sheldon Haudenschild as well, as both drivers ended the evening on the hook after contact with the wall.

Abreu powered away on the restart in clean air but would need to navigate lapped traffic one more time to secure the victory.

With five laps remaining, Abreu approached heavy lapped traffic, allowing Gravel to close in. Gravel attempted slide jobs on Lap 50 and 51, but Abreu stayed in the gas and powered around the CJB Motorsports No.5 to maintain the lead. Abreu’s margin of victory was .655 seconds, as he claimed the Ironman 55 trophy for the second consecutive time.

“Man, that was a lot of fun. Hats off to my guys, that was the best I’ve felt in a long time. It’s all about working together and getting chemistry,” Abreu said in Victory Lane. “Back-to-back Ironman wins is awesome, but we’re not done yet, we’ve got another one tonight,” the St. Helena, CA native added with a smile.

Abreu applauded David Gravel for racing him clean at the end, “If the roles were reversed, it would be the same way.”

Being so close to victory, Gravel was understandably disappointed to come up short. “I really thought I had him cleared and he got back by me. I’m a little mad at myself for not winning this, it sucks to finish second. But I am really happy for Drew [Warner] for him to get his first career Outlaw victory and for Rico,” Gravel added in good spirits. Drew Warner is the crew chief for Rico and is the son of Ricky Warner, the long-time wrench for Donny Schatz.

Jacob Allen continues to chip away in search of his first career Outlaw victory and came home with another podium finish. “This is a great race track and I think most drivers would agree it’s a lot of fun. Congrats to Rico and David, it was a good race for 55 laps,” Allen said in Victory Lane.

The World of Outlaws Craftsman Sprint Car Series returns to Federated Auto Parts Raceway at I-55 tomorrow evening, Saturday, August 4, 2018, for another 55-Lap, $20,000 to win Feature. If you can’t make it to the track, watch all the action on DIRTVision.com!