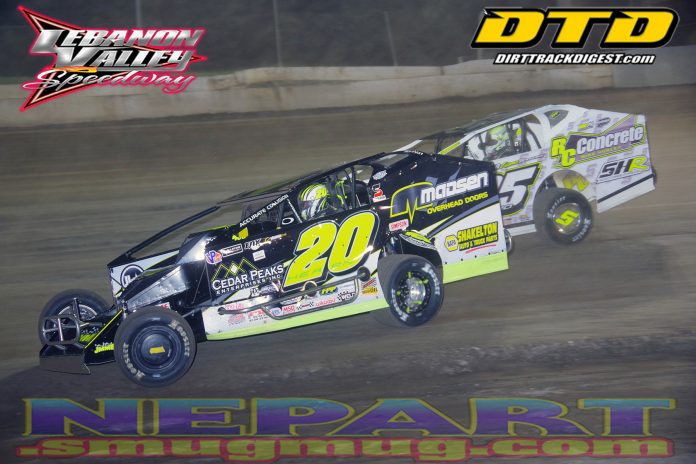 In the Modified feature, Olden Dwyer started from the pole and immediately came under pressure from Andy Bachetti. Less than a mile into the race, Bachetti was able to snatch the lead away. Once out front, Bachetti opened up a good advantage on the field.

Further back, Brett Hearn, who was fastest in hot laps, was quickly moving up the order from the 11th starting spot. By no means was his race easy, though. On lap 10, the right rear shock broke on his No. 20, forcing Hearn to use a straighter enter into the turns. Despite the compromise, Hearn was still one of the fastest cars on the track.

Hearn quickly moved up into the top five and started dispatching those drivers one by one. On Lap 12, Hearn was able to take second away from Olden Dwyer just before Josh Marcus spun in Turn 2 to bring out the first caution of the race.

The yellow wiped out a three-second lead and put Hearn directly alongside. On the restart, Hearn made short work of the Sheffield, Mass. driver to take the lead.

After another short yellow, Hearn was able to put some distance on Bachetti. Trying to save the right rear tire allowed Bachetti to gain some of the time back.

A spin by Ed Kitchell resulted in a nine-lap shootout. Bachetti tried as hard as he could on the restart to sweep past Hearn, but Hearn fended off Bachetti’s slide. From there, Hearn held on to take his third win of 2018.

The Lap 13 yellow was the lynchpin to the race.

“The timing of the [first] yellow was perfect for what I needed to do,” Hearn said. “I was able to get alongside of [Bachetti] without burning my tires up, which is a key thing here.”

In the Small Block Modifieds, Chad Pierce started on pole and led early with Kim LaVoy giving chase. The two drivers opened a small gap on the field, then got to battling among themselves.

Unfortunately, that battle ended in tears as the two drivers got together on Lap 5 in Turn 2. Both drivers spun and LaVoy suffered damage that put her out.

Ryan Charland assumed the lead and put up one of his best races, holding onto the lead past halfway. By that point, Jason Herrington was racing him hard for the lead. Kenny Tremont Jr., who started 15th, was right there as well.

Herrington took the lead on Lap 13 and battled hard with Tremont to maintain the advantage. Tremont was finally able to snatch the advantage away with five laps to go. From there, Tremont pulled away to take his fourth win of the year.

Herrington was second, followed by Charland in a season-best third. Brett Haas was fourth, while Bachetti was fifth.

The Sportsman feature saw rookie Joey Coppola start on pole and lead without issue early on. Peter Carlotto was able to jump Harold Robitaille on the start to move up to second. He stated afterwards that he was lacking just that little bit of oomph to get up to Coppola. More on that later.

The race was clean and green until Ted Teal, Chris Curtis, Chris Lynch and Scott McCoy collided in Turn 2 to bring out the first yellow on Lap 11. Everyone was able to pull away on their own, but Teal’s night came to an end as a result.

Behind Coppola and Carlotto, a huge battle for third erupted between John Virgilio, Michael Sabia, Whitey Slavin and Rob Maxon. With three laps to go, Virgilio, Sabia and Slavin all collided on the frontstretch, sending Slavin hard into the wall and briefly on his side. Slavin was sore afterwards, but walked away.

Coppola was able to hold on to win on the track. Post-race inspection discovered an unapproved gear in the No. 94, resulting in a DQ and victory for Carlotto. Maxon was second, followed by Lynch, Cody Ochs and Curtis.

Pro Stock teams raced 30 laps Saturday night in honor of the late Jimmy Langenback. Unfortunately, the race was marred by a huge pile-up a couple of laps in. Don Collins, who started fourth, was hit from behind while trying to avoid Dave Stickles. From there, the crash was on. Over half of the field piled in, completely blocking the track. No one was injured.

Nick Arnold claimed the lead before the crash, but Rob Yetman ran him down with authority. On Lap 6, Yetman took the advantage and was untouched for the rest of the feature. From there, Yetman held on to win his third race of the year.