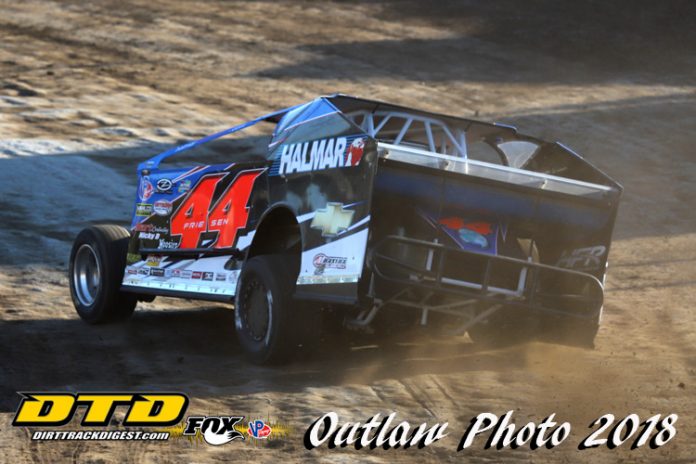 FONDA, NY – After his car was lifted off of another car in a lap one wreck at Fonda on Saturday evening, Stewart Friesen pitted to replace a flat left front tire and bent radius rods and continued on in the 30-lap modified main event with a bent front axle that the crew had no time to replace.

Taking the lead on lap nine after restarting just outside the top 10, Friesen went on to his seventh win of the 2018 season and more importantly the 54th win of his career at the “Track of Champions” tying him for fifth on the Fonda Speedway modified all time win list with the legendary Kenny Shoemaker.

“The track was awesome tonight,” Friesen said in victory lane. “That wreck was crazy (the wreck in turn one on lap one resulting in the red flag being thrown), this place is so fast and you carry so much speed going into turn one that it’s hard to slow down. After the wreck we pitted to change the left front tire and soldiered on.”

The modified feature started in a scary way with the red flag out after a multi car wreck in turn one involving around 10 cars. The wreck started on the front stretch after contact between Troy Palmer and Pep Corradi with Corradi getting airborne on his two left side tires for a brief time. Corradi continued on in the event while Palmer was done for the night at that point.

The rest of the field tried to slow down to avoid the spinning car of Palmer but piled in resulting in all but three cars able to restart the event after a ten minute period where drivers involved in the wreck were able to go to the pit area and try to repair their cars and continue on in the event. Thankfully there were no injuries in the jarring crash.

Sixteen of the original starting field of 20 restarted the event, some with damage apparent to their cars after the wreck, with Cody Bleau the early race leader followed by his teammate Shaun Pangman. After another caution for Chuck Allen who came to a stop on the front stretch, Bleau maintained his lead with Scott Huber now second and followed in the top five by Pangman, Jessica Friesen, Darwin Greene, and Stewart Friesen.

One by one Stewart Friesen disposed on his competitors as he was the new second place car on lap eight after getting by Huber for the spot. On the inside of turn one on lap nine, Stewart Friesen was the new race leader and with him pulling away from the field from that point on the race was for the second position to the checkered flag.

At the halfway point in the event the top five consisted of Stewart Friesen, Huber, Bleau, Pangman, and Josh Hohenforst who was in the Hoyenga owned #3 for the feature event after issues in the heat race sidelined his own #6H car.

A close call on lap 17 for Bobby Varin and Rocky Warner who made contact with each other on the front stretch, and were both sideways, before correcting their cars and continuing on in the event. Bleau and Pangman swapped the third position twice on laps 24 and 25 with Hohenforst eventually able to get by for the third position but it was Stewart Friesen taking the win in his DKM “Cyclone” car by over a 10 second advantage over Huber, Hohenforst, Bleau, and Pangman.

The 25-lap sportsman feature was a good one with Charlie Tibbitts the early race leader from his pole position start. After a caution on lap four slowed the field, Tibbitts maintained his lead with 10th place starter Chad Edwards now in the second position and fifth place starter Nick Scavia third. On the outside of turn three on lap eight, Edwards was the new race leader and he immediately stretched out his advantage to a straightaway by lap 16.

The big lead for Edwards went away on lap 20 when the caution came out and on the restart Tibbitts took away the lead from Edwards with Tony Farone the new third place car after starting eighth. Once Edwards got a couple laps under his belt his car came to life and he retook the lead position on lap 22 on the outside of turn four. Just after the white flag flew for one lap to go in the event, the caution was out one final time giving Tibbitts and Farone one more shot at the win.

Edwards chose the outside line for the restart, took the lead at the drop of the green flag, and went on to his second win of the season in the Spencer racing #37 over Farone, 11th place starter Brian Calabrese, Scavia, and Tibbitts.

“My car was slow on the restarts but came to life after a couple of laps,” Edwards said in victory lane. “After he (Tibbitts) got me on the one restart I chose the outside for the final restart, saw Tony (Farone) on the inside of me, and said man I know he is always good on the inside here. So when the green came back out I held it wide open with everything I had to get the win.”

Just as it has been in the past few weeks at Fonda the pro stocks had trouble getting their event underway with cautions slowing the field in the early laps but once they were able to run consecutive laps it was Jim Normoyle the early race leader. Seventh place starter and defending track champion Kenny Gates was the new second place car after a lap two restart and on lap three was the new race leader after taking the position away from Normoyle on the inside of turn four.

At the halfway point with Gates now out to a big lead the top five consisted of Gates, Chuck Dumblewski, Luke Horning, Nick Stone, and 15th place starter Josh Coonradt. Coonradt was the new second place car on lap 13 after getting by Horning for the spot but with Gates out to a big lead and no more cautions to close up the field Gates went on to his sixth win of the season and the 78th of his career in the division in the over Coonradt, Stone, Horning, and Dumblewski.

“Anytime you are out front you hope that it goes the whole way without any cautions,” Gates said of the many yellow flags that slowed the event. “I took advantage of the track tonight as it was just the way that I like it with a lot of bite on the bottom.”

Cliff Haslun led the first five laps in the 12-lap street stock feature before Michael Arnold took over the lead after starting second. Defending track champion Johnny Young took the lead on a lap 10 restart and went on to his fourth win of the season and the 12th of his career in the division over Jeff Meltz, Dave Horning Sr., Haslun, Steven Young, Arnold, Rob VanAernam, Kenny Hollenback, Mark Dwyer, and Jason Samrov.

Next Saturday, August 11 School House Pools will present a regular racing program in all divisions along with the Classics on Dirt Vintage cars with racing starting at 7:00 p.m.