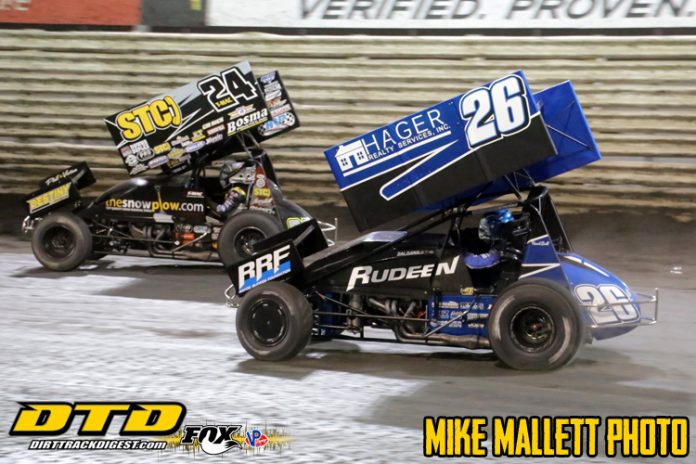 KNOXVILLE, IA – Terry McCarl re-passed Carson Macedo with two to go to win his fifth career Knoxville 360 Nationals presented by Great Southern Bank Saturday night at Knoxville Raceway. The win was worth $15,000 to the Altoona, Iowa native aboard the TMAC Motorsports #24 “Franken-A.R.T.” a combination of two 2013 A.R.T. chassis.

Joey Saldana took off from the pole to lead early over McCarl, Brian Brown, Greg Hodnett and Gio Scelzi. Carson Macedo, who got a bit of a slow start, entered the top five when he passed Scelzi on lap four. McCarl reeled in Saldana and passed him high in turn two to take the lead on lap five. With eight laps in the books, Brooke Tatnell contacted Jamie Ball, with the latter flipping hard in turn two. He was uninjured.

McCarl shot back in front when the green fell, ahead of Saldana, Brown, Hodnett, and Macedo. Macedo slid past Hodnett for fourth. Wayne Johnson, who was running tenth, slowed with a magneto issue, bringing caution on lap 11. That negated a Brown pass of Saldana for second. Macedo used the restart to get by Brown and take over third.

A red flag stopped things again when Scott Bogucki and Cole Duncan, who tipper over, tangled. Both were o.k. When the green flew again, Macedo slid by Saldana for the second spot and began reeling in the leader. Brown would get by Saldana for third with ten to go.

On lap 17, Macedo shot by McCarl to take the lead. Brown would follow him a lap later. The third place, McCarl, began searching the racetrack and found something on the low side. He reeled Brown back in and passed him for second with three to go. A lap later, he would shoot by the cushion riding Macedo to take the lead.

McCarl would prevail for the eighth time in his 360 career here over Macedo, Brown, Saldana and Thomas Kennedy. Hodnett, Gio Scelzi, Cory Eliason, Dominic Scelzi and Tim Kaeding rounded out the top ten. Sawyer Phillips was the D main winner, Jonathan Cornell took the C main, and Shane Golobic claimed the B. Crashes in both the C and B mains saw Tyler Blank and McKenna Haase take rides, but both were uninjured.

Macedo won a pair of awards. The highest finishing Rookie of the race also had his Jason Johnson Racing #41 voted as the “Best Appearing” car. Tatnell won a steering wheel from MPI for his hard-charger efforts (22nd to 11th).

“I used my tires up pretty hard there early racing with Joey,” said McCarl in Victory Lane. “I was a little conservative and got loose there. Sometimes it’s better to be leading and sometimes it isn’t. When I dropped back to third, I had nothing to lose. It doesn’t matter if you are third, fourth or fifth, you come to win. I was able to move around. The guys out front were kind of sitting ducks and couldn’t move around like that. I found the bottom, and I was thinking, ‘Please don’t move down.’ I have to thank Don Long and Jaymie Moyle. I’m so happy to win for them.”

“My racecar was really fast,” said Macedo. “I had a blast driving this car this weekend. I can’t say enough about this whole family and this team. It’s really cool. I initially got a little bit of a bad start, but I was able to get to the top and pick some guys off. Late in the race, I could really slide across, catch the cushion and drive off. When I got by Terry, I tried to get up there and stay as straight as I could. He found the bottom and was able to get by me.”

“If they didn’t like that race, I don’t know what else we can do to put on a good show,” said Brown. “I really thought once I got by Terry, I found the rubber a couple lanes down in three and four. Carson hadn’t found it yet, and the next thing you know here comes Terry. He’s a veteran here and he knows where to look. I was afraid to go to the bottom and lose my opportunity with Carson. My hat’s off to my team.”

Coming up next for the Lucas Oil American Sprint Car Series presented by Sawblade.com is the Sage Fruit Ultimate Challenge at Southern Iowa Speedway on Tuesday, August 7. Ticket and event info can be found online at http://www.oskychallenges.com.

B-Feature (Top 4 advance to the A-Feature)

D-Feature (Top 8 advance to the C-Feature)