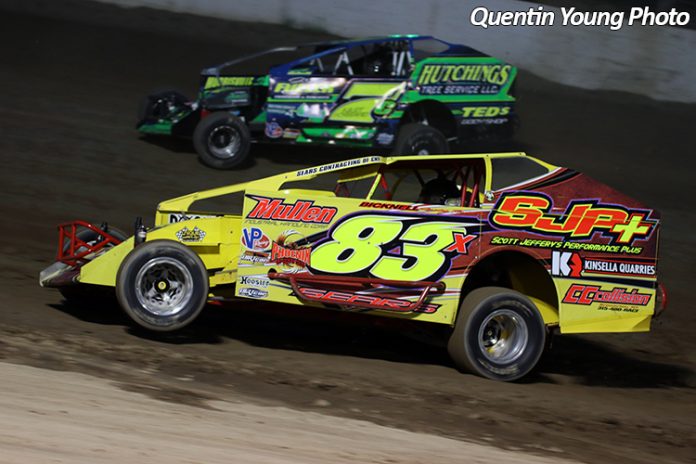 FULTON, NY – Once Tim Sears Jr. took the lead, there was no stopping the defending Fulton Speedway champion from cruising to his third win of the year in dominating fashion. Tyler Trump took control of the 358-Modified field at the drop of the green flag, darting away from Jeff McGinnis and Tim Sears Jr. in the opening stages of the 35-lap affair. Sears got around McGinnis with eight laps complete, then setting sail after Trump for the top spot. Once in the runner up spot, Sears quickly chomped away at Trump’s advantage, drawing within feet of the leader by lap 14.

However, Billy Whittaker came to a halt on the frontstretch, and the caution allowed Sears to line up door-to-door with Trump. On the restart, Sears went to the top of the speedway and blasted around Trump. Once in front, Sears put his right foot to the firewall and motored away from the pack. Trump, McGinnis, Glenn Forward, and Tom Sears Jr. fought hard for second, but the battle allowed Sears to pull out to a big lead. With ten laps to go, the gap between first and second had grown to an entire straightaway, but the fight behind Sears was getting more physical than before.

On lap 28, Forward went to make an aggressive pass for second on McGinnis, but grabbed an infield tire with his left front, sending him spinning. The yellow flag brought the pack back to Sears with less than the distance of a heat race to go, but Sears wasn’t fazed. Tom Sears Jr. slid around McGinnis on the restart, with Larry Wight following through for third soon after. As Wight and Tom Sears Jr. dueled for second, they could only sit back and watch as Tim Sears Jr. cruised to his third 358-Modified win of the season at Fulton.

“Patience is just something you learn over time, and we’ve been doing this Modified stuff for a while now,” Sears said. “It’s one of the hardest things to learn. Tonight our car was really good, I could run through the bumps and never really disturbed the car much. It was fun to drive.”


Dylan Zacharias grabbed his first of the year in the first Sportsman main, walking around Brett Draper just before the midway mark of the event and surviving a rash of restarts. Former track champion Tony Finch II ran away and hid during the second Sportsman event, dominating the distance for the victory. Bret Belden led all 20 in the Late Model feature, grabbing his second of the season in dominating fashion. Quinn Wallis had his way with the Novice Sportsman field, cruising to another win at Fulton.