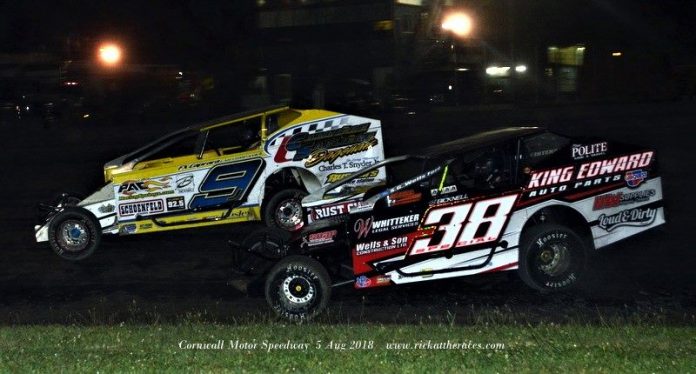 CORNWALL, ONT – Cornwall Motor Speedway hosted one the most unique shows of 2018 as both Draper Doors Canadian Nationals Modified Series and Race for the Cure Sportsman Series were on tap along with a complete show in both Pro-Stock and Mini-Stock. The fine folks of Twinleaf Stores sponsored the event.

The Draper Doors Canadian Nationals saw Jordan McCreadie and Joey Ladouceur leading field of 26 to green as Jordan McCreadie led the initial lap as David Hebert stopped in turn 3. McCreadie to the lead on lap 6 over Ladouceur and Yan Bussiere. McCreadie was strong in front as Luke Whitteker and Mario Clair passed Bussiere with 18 laps in the books. Whitteker started to make some noise as the leaders headed towards traffic, he challenged Ladouceur for second by lap 30. Running in the top 5, Steve Bernier slowed the field down on lap 36. McCreadie led every lap leading to halfway point in front of Joey Ladouceur and Luke Whitteker. Ladouceur and Whitteker battled hard for second as Whitteker was able to pass Ladouceur by lap 54 and reeled in to the leader. Whitteker used the inside lane in turn 2 and made the pass for the lead with 41 laps to go. Chris Raabe quickly made his way to the front passing Joey Ladouceur and Jordan McCreadie on the lap and set sights on Whitteker. Lap cars played in favour of Whitteker with 25 laps to go. David Hebert slowed the field down with 81 laps in the books. A lap 86 restart provided Carey Terrance the third spot as he is running the high lane hard. Whitteker didn’t do any errors and led the final portion to capture the event in front of Raabe and Terrance.

Cedric Gauvreau led the field to green in the 100-lap Race for the Cure feature with Justin Lalancette besides him, Lalancette didn’t waste time as he took the lead on the second lap as Mike Stacey and Brianna Ladouceur made their way into the top 3. A lot of action in the first quarter of the event as Shane Pecore grabbed the lead over Ladouceur and Lalancette on lap 19. The leaders got into traffic as Devin Willis slowed in the backstretch and caution was out on lap 30. Pecore led the way as Tristan Draper and Martin Pelletier came to a stop, Pelletier needed help to get to the pits, ending his night early for the Series point leader. At halfway point, Pecore was running great in front with Ladouceur and Lalancette for third. Pecore leading the way with Ladouceur following closely as Stacey was back in third. Pecore had issues with his car and caution was out on lap 72, giving the lead to Ladouceur. On the restart, Ladouceur leading with Ryan Stabler making his way to third. Stabler had a great car and passed Stacey for second with 20 laps to go. Heavy traffic started to be a factor with 10 laps to go as Moise Page was now third passing Stacey. Ladouceur led the final laps and captured the win over Stabler and Page.

Karl Potvin had a dominant start in the Tracy Wheeler Assist2Sell Mini-Stock feature, Potvin led the first nine laps as Corey Gates brought the caution. On the restart, both Potvin brothers were in the front row as Karl was ahead of Yanik. Collecting his second feature of the season was Karl Potvin.

Another great night of racing next week as the Northeast Late Model Alliance group will in town, the only occasion to see Late Model racing in eastern Ontario this season, the Lightning Sprints will also be in attendance along with a complete race program as the Pro-Stock will have a night off.