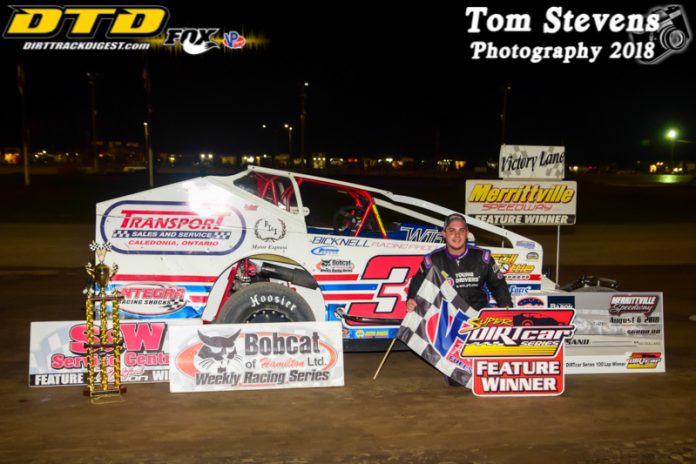 THOROLD, ONT – Ryan Susice is not a stranger to Victory Lane at Merrittville Speedway, but this one will go down in history as his first career Super DIRTcar Series race win. Susice started on the pole and fended off all challengers to take the win. Danny Johnson, in the newly christened no. 21J Troyer chassis, was the last driver to get a shot at Susice, but he would fall short and settle for second place. Chad Brachmann, a former Series regular and local hot shoe, stayed in the top three all night, bringing the no. 3 car home on the podium in third.

Ryan Susice lead the 30-car field to the green flag, and was never scored below first place. However, that does not mean he set his racing machine on cruise control. Four drivers took shots at the lead. First, the outside pole sitter and second in points, Erick Rudolph, sent some haymakers at Susice around the high-side, but the no. 3RS managed to hold him off. Then, Rudolph fell to third and it was Chad Brachmann’s turn, but he too could not take the leader down either. Mike Bowman, in the blue no. 71, passed Brachmann and gave it all he had to sweep by Susice on the outside, but he too fell short. Finally, Danny Johnson picked his way through the top of the field and started knocking on Susice’s door. Susice had to work through some lapped traffic, but deftly maneuvered his way through, to hold off the charging Danny Johnson.

The smiles were wide in Ryan Susice’s Victory Lane: “It’s really special. This race is always one we mark on the calendar. Just to be out here and competing is awesome, but I just had a feeling tonight. I knew we had an awesome car, as long as everything worked out tonight, we made the right moves, I thought we could put it here [Victory Lane].”

The night started out great for Susice as he made it to the redraw but then he saw the number he pulled: “Luckily we drew number 1. Dave [Farney] was up on the stand giving me lots of signals and I was just trying to pace myself. I didn’t want to give up too early and waste tires.

It’s been a long time coming for Susice: “I was starting to think I would never get one of these. It’s really special. I gotta thank Merrittville Speedway for continuing this tradition and putting the show on. Unfortunately, I gotta work tomorrow because I really want to party this one up.”

Since the deal with Ray Graham and Shackleton Auto put him in a new race car after a horrific accident at Orange County Fair Speedway, Danny Johnson has been on a tear. If he maintains the pace he is on, he’ll be a serious threat to win the Championship come October.
“It’s been awesome for me. I’ve got Shackleton Auto and Ray Graham, Peter Britten, and all them guys, Billy Colton and Troyer put together a great hot rod for me. A Big-Block running against these Small-Blocks, it’s kind of tough, but he had a lot of fun out here and got a solid second place from starting in the sixth spot. We’re really happy with what we got.”

Chad Brachmann did some tuning at Merrittville earlier in the week and found that the car was not right. “After our performance here on Saturday night, I went back and tore the whole car apart last night. I found a bunch of things wrong and it proved that little things make a big difference. Hats off to Ryan, that’s great. Track position was everything and he did a great job doing what he had to do. “
The next Super DIRTcar Series race is Tuesday, August 7 at Ransomville Speedway for the Summer Nationals.
Merrittville Speedway Feature Results (100 Laps)