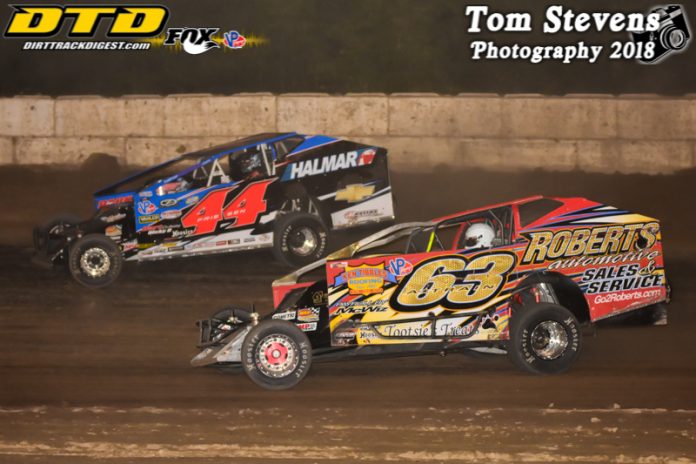 RANSOMVILLE, NY – After starting on the outside pole, Stewart Friesen, five-time NAPA Super DIRT Week Champion, powered by Chad Brachmann racing into turn one on the opening lap. Friesen faced challenges from Matt Sheppard and Mat Williamson throughout the 100 circuits around the half-mile Niagara County facility, but was able to hold them off.

A familiar “old school” Ransomville cushion formed at the top of the track, and Friesen made expert use of it. He leaned on it like an old friend, and it carried him to Summer Nationals victory for the sixth time. Mat Williamson, not content with second, nearly grabbed the lead out from under Friesen in the closing laps. Third place finisher Brett Hearn had serious mechanical issues early in the race, but his team was able to fix the failed part, and the no. 20 found its way to the podium.

Stewart Friesen spent a lot of time at Ransomville Speedway growing up, and he was ecstatic to make it to Victory Lane there once again.

“I love this place. Thanks everybody for coming out and supporting this event. It’s so great to see this place in good hands. The upkeep and everything has been tremendous. It’s so cool to win this race again that my uncle started. It’s so special.”

Friesen and the Halmar Racing team have a lot of racing going on between the Modified program and the NASCAR Camping World Truck effort.

“I just gotta thank all the great race fans and my great race team. These work hard. You know we are on the road this week racing. The Modified keeps evolving. There’s a lot of different geometry going on. We kinda went with some old school stuff tonight that always worked at the old Ransomville, but it worked at the new Ransomville. We held off Mat [Williamson] and the new school stuff.”

Runner-up Mat Williamson made a late race charge for the lead. Friesen was well aware of the pressure being applied:

“I had to get up on the wheel there and not make a mistake” It was an old school Ransomville cushion, which was so fun to drive. I figured if I hit a couple good lines and then the lapped car got in there at the end. Well if you are side-by-side with a lapped car, it gives less room for him [Williamson]. Hats off to those guys.”

Mat Williamson had a long way to go to get to the front after starting tenth. He was fast enough to make the passes when he needed to, but it was during the last quarter of the race that his car came alive. “We had a really good car the last 15 laps. Stewie has run a hell of a lot of laps here, and he’s probably the best driver in the northeast right now. To finish second to him is nothing to hang our heads about. To finish that close, they knew we were here, and that’s all that matters.”

Wily veteran Brett Hearn was fast all night but a broken shock almost ended his race if not for a stroke of luck.

“We sheared a bolt on the left rear shock mount and the car dropped down to the ground. The guys, just a stroke of luck that the red came out while we were in the pits, I got back in the pits before the red came out. The timing couldn’t have been any more perfect. It’s just sometimes you’re lucky and sometimes you’re not. It was one of those things that would have knocked us out of the race normally. But those guys were able to get the drills out and get the bolt out of the mount and make the repair just at the nick of time.”

Brett Hearn pulled the no. 20 into the pit area with the broken shock, and just after he pulled in, Mike Williams rolled in turn 3. Often times in racing, good luck for one driver means bad luck for another. At the same time, Matt Farnham’s no. 7F and Ryan Susice’s no. 38 collided at the pit entrance and became hooked together. Hearn’s team was already working on the broken shock, and completed the repair just before the field took the green again. From there Hearn went to work and carved his way through the field, all the way to third place.

The next Super DIRTcar Series race takes place on Monday, August 13 at Fonda Speedway for “The Jack,” a NAPA Super DIRT Week Qualifier.