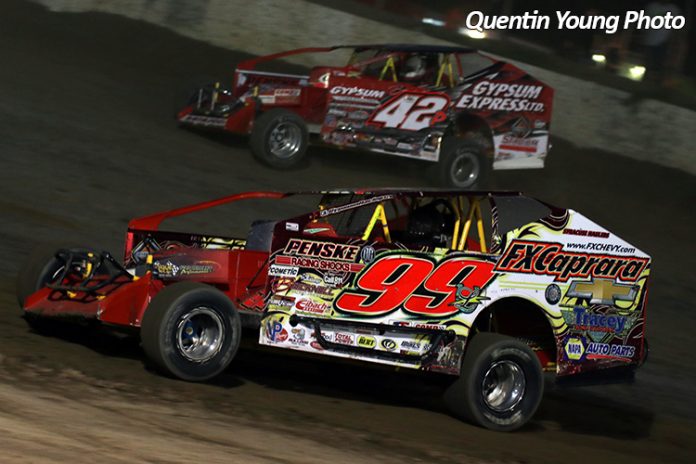 What an interesting weekend I had trying to chase racing. Friday I was at Brewerton making my rounds. When I started up the stairs to the tower for the invocation it started to sprinkle, then it rained hard for a while. Unfortunately the forecast didn’t look good for the rest of the night so they called the show. My son was at the Syracuse Quarter Midget Club helping out Adam DeLucia and his family so I decided to drive down there to see what was going on with the weather. It was humid, overcast, and hot, but not a drop of rain fell.

I’d forgotten how hot the asphalt gets in August at a pavement race. The kids all put on a good show. Adam ended up finishing second in his A Main after the crew chief decided to ignore my advice, which made Adam’s car too tight when the tires came in. Even still, Adam drove a great race to his best finish to date in Senior Honda. After hanging around with a few families after the show we drove home to get some sleep before Saturday led me off the Fulton Speedway.

The pits filled right up Saturday with Sportsman cars. 59 regular Sportsman and several Novice Sportsman made for some great racing, as well as the 358 Modifieds, along with the Late Models.

Brett Belden got his second win in the first feature of the night while Sean Beardsley out ran Max Hill for second place in the closing laps of the Rush Late Model main event. Tim Sears Jr. raced his way to the top of the heap in the Tracey Road Equipment modifieds. The first SUNY Canton Sportsman race seemed like a precursor to eternity, but they did manage to complete all 25 laps eventually in,just over 26 minutes, averaging 1 minute 5 second lap times. That was quite an unexpected turn of events since recent features with the same drivers have been going green to checkered.


Dylan Zaccharias held on to win the caution riddled event a day after his 21st birthday. Tony Finch III took the top spot in the second Sportsman feature. Quinn Wallace raced his way to the win in the novice Sportsman. Overall it was a pretty entertaining night. The dance I did while getting stung in my right ankle played right into the entertainment value for some people I’m sure, but more on that later.

Sunday after an anointed church service I took my wife out to lunch, then took off for Utica Rome for the Night Of Legends which featured the Jan Corcoran Memorial Big Block/ Small Block Shootout.

Great car counts, a good crowd of fans, and some August sunshine set the stage for a great night of racing. Super Matt Sheppard was the top runner in the 50 lap Modified feature. Matt Janzuk out ran the Sportsman field to take another win. For more results check the track’s official press release here on Dirt Track Digest.

Back to the sting. As I was walking from the grandstand area down the pit road above the concession stand at Fulton Speedway during intermission Saturday night I was being very intentional in watching my step on the stones because there were people following me, and Pastor’s have to be confident and dignified, LOL.

All of the sudden I felt a sharp sting on the back of my right ankle that sent me reeling on my left foot while I swatted at the assailant with my right hand only to come up empty. I never saw it coming, and I never saw what did it. I quickly regained “dignity” and scraped at the sting with my thumbnail. A few moments later the pain was gone so I revelled in the idea that it was a bee that flew off to die after waisting its stinger on an old survivalist camper. I’m sure the people that saw the wild dance were as wildly entertained by it as I amnow thinking about it.

Sometimes life will just sneak up and zap you like that bee did me. How you react when that happens depends on how well you deal with the unforeseen. Some people will instantly act out of instinct. Others may act out of emotions stirred by the event. Other’s still may withdraw and compartmentalize their emotions to guard themselves from other people’s opinions and reactions. It’s interesting to see how different people handle the same things in their own way, but this is for those of you that withdraw and hide from dealing with your emotions when life blindsides you.

Stop for a moment and ask yourself “what does it look like inside a cardboard box with the lid on?” As your imagination begins to paint images let me just say it’s dark in there because the thickness of the material the box is made of prevents light from entering.

The same goes for your own spirit when you compartmentalize things. Emotions, dreams, pains, flaws, fears, you name it, all remain in the darkness of the box you’ve neatly tucked them into, which prevents the light of God’s glory from shining on them. If this describes you, you’re being held captive by your emotions. Jesus Christ came to set you free.

Exposure to the light introduces the standard of measure of God’s intention. He wants to bring solutions to light for you. It doesn’t matter whether you need healing, deliverance, or divine guidance, God’s glory is the delivery system.

If you want God’s help learn to take the lid off. Expose the hidden things of your heart to Him. Don’t worry if you don’t know how to pray or what to say. Just be real, be yourself.

Bible teacher and author Lynn Hammond has this to say about prayer: “When you pray, quit trying to manufacture elegant, super-spiritual-sounding phrases and simply start expressing your heart to God. Be honest and open with Him. When you don’t know what to pray next, tell God about it. Say, “Father, I want to talk to you, but I seem to be hitting a brick wall and I’m not able to express myself. I don’t know what to do about it, so I’m just asking You to help me.” It sounds almost childishly simple, doesn’t it? Yet the truth is, a prayer like that spoken from the heart will produce far greater results than the grandest prayer designed by the mind of man. That’s because it’s the heartfelt prayer (James 5:16, Amplified Bible) not the headfelt prayer that makes tremendous power available”.

God understands everything about you. He became a human being to understand the reality of our limitations. Unpack whatever you’re hiding in the secret places of your heart through prayer and God will reveal the boundless energy and power of His life to you as you experience His limitless love toward you.

“Then you will call upon Me and go and pray to Me, and I will listen to you. And you will seek Me and find Me, when you search for Me with all your heart. I will be found by you, says the Lord , and I will bring you back from your captivity… Jeremiah 29:12-14a NKJV”

I pray this helps you. We’re always available for biblical guidance and spiritual development. I can be reached on Facebook at Finish Line Chaplain or Kevin Westcott Ministries, and by email at flchaplain@windstream.net. Don’t hesitate to contact us when life stings you unexpectedly. We’re here to serve you.