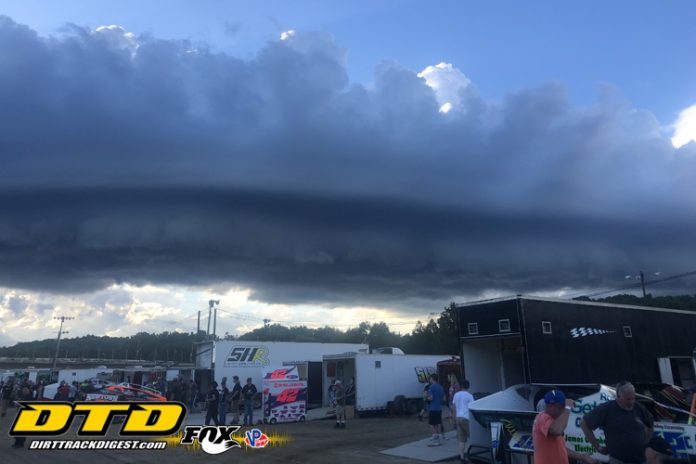 We ventured to Lebanon Valley on Saturday and were pleasantly surprised at how dry the pit area was after all the rain we had this past week. We heard earlier in the day that the staff at Lebanon Valley was pumping out the infield and we will say they did a fabulous job of getting things dried out before activities started. Another weather related item, as we stood in the pit area on Saturday we received a weather alert that there was a storm in Nassau. As we looked west we could see the huge black cloud heading toward The Valley but miraculously it went right over. Wow, it must be that Howie dome, everyone speaks of on occasion. We spoke with Ronnie Johnson, who at the beginning of the night was leading the points at The Valley. But knowing it was only three points and it was Brett Hearn who was second, Ronnie had no expectations. “So far, things are going well,” said Ronnie with emphasis on “so far” he said he is happy with how things have been going. He knows the season is far from over and the competition is tough on the high banks. Ronnie returned to the Valley this season as a car owner and driver and “so far” has five top fives in eleven shows. Certainly the consistency is what put him where he is in points. By the end of the night his point lead was erased by Brett Hearn who won the Modified feature in convincing fashion. Ronnie finished sixth. Lorne Browe returned to racing at Lebanon Valley three weeks ago and said he would like to put more effort into his weekly racing. Once a Valley regular, Browe has been racing hit and miss the past five year, he returned this season to the 358 Modified class. Browe finished sixth in the 358 Modified feature on Saturday.


When asked how the track was on Saturday, Kim LaVoy said it was a little rough in warm ups but Lyle and crew went out and did what needed to be done to fix the surface and in the heat race it was good. Kim enjoys racing at Lebanon Valley and enjoys the time she spends there each week. We always enjoy talking with Kim, she is a young lady that puts all into whatever she does. Kim’s dad has been a part of the local racing scene for many years. Rick LaVoy is one of the gentleman of our sport that is not in the spot light but over the years has worked with some of the best. We fondly remember the No. 32 wheeled by the multi-time Lebanon Valley champion, Tommy Corellis.

The Pro Stock feature on Saturday was the 30-lap Jim Langenback Memorial event, 30-laps paying bonuses to several positions. The event on Saturday got off to a bad start; on lap 2 about 12-15 cars piled up on the backstretch after a couple cars got out of shape and the field piled into them. Rob Yetman was on top at the checker.

If you haven’t marked you calendars for the season ending big events, it’s time. One of the biggest paying events ($17,500 to win) on the late season schedule has always been the Mr. Dirt Track USA race at Lebanon Valley. According to an announcement from victory lane on Saturday, this year the big one at Lebanon Valley will pay at lease $25,000. Announcer, John Stanley made the announcement while interviewing, winner of the Modified feature, Brett Hearn. Surely the Modified winner is looking forward to September 1st, this year’s date of the event. Hearn has won the event more times than anyone, eleven. The only other multi-time winners of the event are Kenny Tremont with four wins, Andy Bachetti and J. R. Heffner with three, Billy Decker and Merv Treichler both with two. The event has been run 38 times and has been won by 13 drivers that have called The Valley home. The last two events were won by outsiders, Matt Sheppard and Stewart Friesen.

Kenny Tremont won the 358 Modified event on Saturday and announcer John Stanley did an outstanding job highlighting and congratulating Tremont on his recent induction into the Northeast Dirt Modified Hall of Fame before his hometown fans.

Mark your calendars for August 14 and 15. On Tuesday, August 14th Brett Deyo of BD Motorsports brings the “Stampede at Toga” to Albany Saratoga, sponsored by Recovery Sports Grill, 50 laps paying big money and then on Wednesday, August 15th Fonda has on its schedule the Grand Daddy 602 World Championship by Adirondac Leather. From Glen Ridge Sunday night- last week we spoke with Alicia Hughes who is in her first year of Pro Stock competition. Alicia recently turned 27 years old on 7/30, thus the number of her car, #730. This week Alicia showed that she is a true sportsman when she loaned her car to Ivan Joslin for the night because Ivan is running for points. When asked why, she responded with a giant smile, “I’m racing for the fun of it and Ivan is in the points.” We remember when this was a more common thing in racing, she is truly a breath of fresh air and a welcome addition to our sport.

This week Glen Ridge Motorsports Park announced their inaugural Hall of Fame class of inductees and date of inductions. There are four members and the first is the Hayes family, owners and founders of the fastest 1/4 mile on dirt. The second is driver, crew member and ambassador of the track Randy Hotaling. Randy has eleven total wins at Glen Ridge and was Track Champion in 2006. Next is driver Bob Vedder who retired from racing last season. Like Randy, Bob has always had the best interest of The Ridge in mind and was always willing to help the track or fellow competitors. Vedder was instrumental in bringing the Schoharie Kiwanis Club Hard Charger Award to the track each year. The Hall of Fame inductions will take place on August 19th during intermission. Coming up at Glen Ridge on Sunday, August 19th is The Aftershock, $2500 to win, $250 to take the green plus lap money, 66 laps for big blocks and small blocks.

In closing we send out condolences to the Boehler brothers, Bob, Craig and Mike who’s mother passed away last month. The memorial service was Saturday in Cobleskill. The Boehler’s fielded a race team with Craig at the wheel for several years at Fonda and Lebanon Valley. Also our prayers go out to the famil