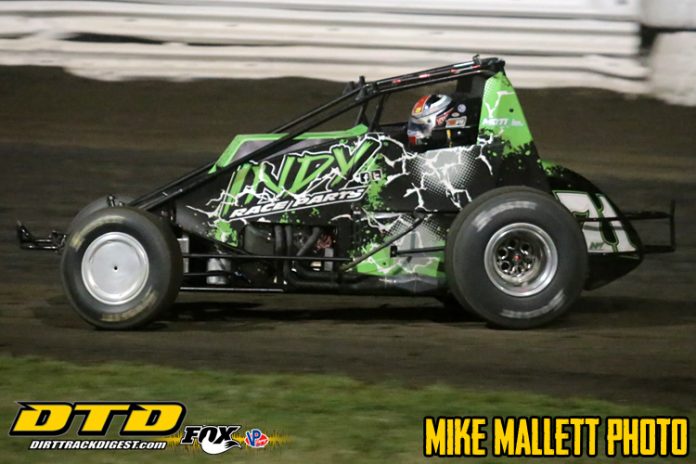 OSKALOOSA, IA – Storming from fifth-to-first in the opening four laps, Kevin Thomas Jr. commanded the field for the closing 21 laps as he dominated Tuesday night’s “Ultimate Challenge” with the WAR Wildcard Sprints at Southern Iowa Speedway. Sneaking by Isaac Chapple on the bottom on the fourth circuit, Thomas Jr. of Cullman, Alabama ensued to throw the hotel keys on the counter and check out, as he parked the Indy Race Parts No. 71 in victory lane and stood victorious with the unique Sage Fruit championship belt above his head.

Earning LRB, Inc. #HighPointMan honors due to an eighth-to-second heat race charge, Mitchell Davis declined the high point challenge and redrew a six for the feature inversion. Initially, the presenting sponsor of the high point challenge, Valor Racing, made an exemption and offered the task to Kevin Thomas Jr (second in points). After much anticipation and hype created earlier in the night with his promise to go tailback, KTJ shocked many as he instead turned it down and rolled out for the feature from fifth.

Rolling out for the 25-lap main event, the 24-car field was brought to life by the front row of Dylan Kadous and Isaac Chapple. However, contact from Kevin Thomas Jr. to Dylan Kadous down the backstretch sent the No. 31X of Kadous around and spinning in front of a full field. Kadous miraculously escaped unscathed with no further contact and even managed to somehow save his night by keeping his machine running. Ultimately, the red flag flew as Katlynn Leer further back in the pack went upside down out of turn two aboard her No. 77X entry. Thankfully, she climbed out of the car under her own power.

Going back to green with a complete restart, Kadous maintained command down the backstretch until Isaac Chapple launched a turn three slider and cleared him for the top spot to lead lap one. As Chapple tried to sneak away in the early running, Kevin Thomas Jr. maneuvered into the second spot and set his sights on the lead.

Catching Chapple on the fourth circuit, Thomas Jr. continued to roll the bottom and power by him for the lead. Once in command, KTJ ensued to leave the field and enter lap traffic with a huge lead intact. While he checked out in front, all eyes turned to Riley Kreisel who was fast and furious during his charge from tenth-to-third and began challenging Chapple for the runner-up position.

A late-race restart with six laps left setup a dash to the finish, but Thomas Jr’s massive lead was undeniable as he had lapped up to the sixth spot and created a swarm of lappers to separate himself from Riley Kreisel.

Kevin Thomas Jr. would again storm away on the final restart and run away with a dominating triumph to score the championship belt and win the Ultimate Challenge at Southern Iowa Speedway. Marking his first-career win with the WAR Wildcard Sprints, his victory at the Oskaloosa, Iowa facility paid out $2,500 for the driver of the Indy Race Parts No. 71.

Trailing Kevin Thomas Jr. to the line on Tuesday night, Riley Kreisel of Warsaw, Missouri made his trip to Iowa well worthwhile as he completed an impressive tenth-to-second charge. Completing the podium, Zach Daum of Pocahontas, Illinois finished in third-place aboard his No. 5D entry. Finishing in fourth, Isaac Chapple paced the opening three laps before ultimately slipping back to still claim a solid top five finish in the No. 52 for the Indiana native. Closing out the top five was WAR Wildcard points leader, Landon Simon, in his Mount Baker Vapor No. 24. Rounding out the top ten was Mario Clouser in sixth, Korey Weyant in seventh, Logan Faucon in eighth, Donovan Peterson in ninth and Brad Wyatt in tenth, who was the hard charger from 21st.

On tap next for the POWRi Lucas Oil WAR Sprint League is a return to the “Show-Me State” as we host the first leg of the highly-anticipated Bell Racing USA Triple Crown Challenge! A two-day show at Lake Ozark Speedway in Eldon, Missouri on Friday and Saturday, August 17th-18th, the WAR Non-Wing Nationals is the gateway to a potential $20,000 payday if a driver can win at Lake Ozark (August 18th), Lucas Oil (September 22nd) and Fairbury (October 6th).