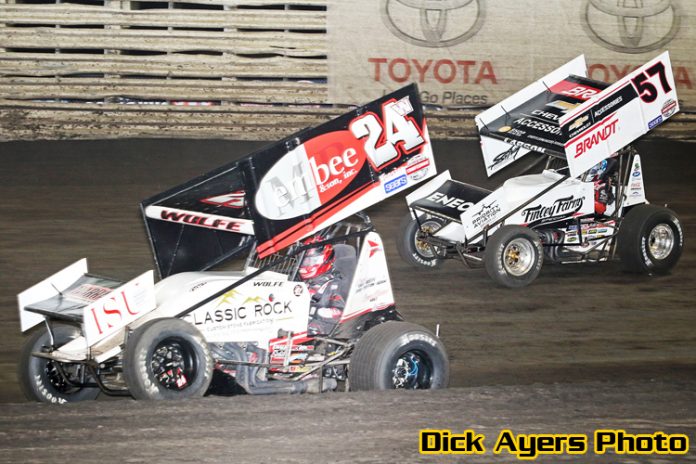 KNOXVILLE, IA – It wasn’t easy, but at the end of the first night of the 58th running of the Knoxville Nationals, Kyle Larson sat on top of the point standings. The Elk Grove, Calif., star fought an uphill battle all night long before beating out Donny Schatz by one point for the honor of being on top.

Larson’s luck coming through the gate for the draw couldn’t have been any worse. The NASCAR Monster Cup Energy Cup driver drew pill 75 out of 75. This meant he would time trial last out of the 45 cars entered for the Nationals opener.

“My draws have been unbelievable this year,” stated Larson. “I don’t think I’ve drawn worse than a 15 all year long. All year long by doing that I knew when I got to Knoxville it was going to catch up to me. I was going to draw a late pill. I didn’t think it would be the worst one.”

The poor pill draw applied extra pressure because if he wasn’t able to lock into the show Wednesday night he may have to miss the show completely due to his NASCAR commitments. The logistics of getting back and forth between this week’s race at Michigan and Knoxville Raceway made it nearly impossible for him to run Friday night’s program.

“I was nervous when I drew that last pill because I didn’t want this to be the year I had to watch,” cited Larson. “I just wanted to put a good night together. It’s good to not have to worry about a backup plan.”

Larson did what he had to do in time trials before transferring through the heat race. He settled for a third place finish in the feature behind Greg Hodnett and Tim Shaffer. It was good enough to beat out Donny Schatz by one point at the end of the night after Schatz came from 20th to finish fifth.

“I was able to run a decent second lap, but my first lap wasn’t very good,” commented Larson. “I hit the bottom nice. I went to 10th quick. The heat race was really important too. I didn’t get a good start, but once we got single file I had enough speed to get all the way up to second. That gained us some points there. I went forward in the feature as well. It was a good night. It’s nice to lock in here at Knoxville for sure.”

Schatz placed second in the standings then it was Aaron Reutzel, Kerry Madsen and Shaffer completing the top five.