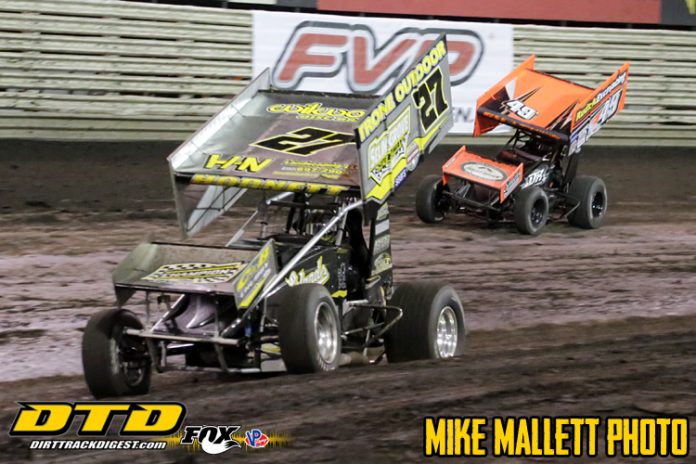 KNOXVILLE, IA – Wednesday night’s kick-off to the 58th running of the Knoxville Nationals had a Pennsylvania feel to it as Brock Zearfoss and Greg Hodnett made up the first row while Lucas Wolfe and Tim Shaffer started right behind them in row two.

At the conclusion of the 25-lap affair it was Pennsylvania native Hodnett taking home the $12,000 winner’s share with Shaffer, the winner of the 50th Knoxville Nationals, finishing in second.

It was Hodnett’s second career 410 Sprint Car victory at the Marion County Fairgrounds facility. He seems to have speed each and every time he trek’s to the Midwest from Pennslyvania regardless of how things are going at home.  Wednesday night was no different.

“I really do like Knoxville,” said Hodnett afterwards. “I like the way it races. It tends to make you drive pretty straight and pretty hard. It is what I like to do unlike, say … Lincoln Speedway which I hate. Kyle (Larson) likes it. I just can’t do it there. This lends itself to my driving style I think, and I’ve always felt comfortable here. I really love the atmosphere. It kind of gets me, I wouldn’t say excited, but up a little bit.”

Hodnett survived multiple restarts during the race with Shaffer nipping at his heals. Each team he mastered restarting through turns one and two keeping Shaffer at bay.

“It’s really tough for me,” said Hodnett about the restarts. “I don’t have enough experience leading a race here, like ever. I’ve never led a restart I don’t think in my life to be honest with you. It was kind of a guessing game for me. I didn’t think I wanted to leave the bottom open because normally here … every time I’ve watched videos or things like that, replays of the racing weekly the guy that leaves the bottom open is usually getting passed on the other side of the corner because of the guy with a slider. Sometimes they’ll stick it to the bottom. For lack of a better word, I was just in block mode on the restarts and hoped nobody would drive by on the outside before I got to it.”

In the closing laps Shaffer gave him all he could handle diving low through turns one and two. He was nearly able to pull alongside Hodnett. Hodnett wasn’t sure what kind of lead he had. He was just hanging on.

“I had no clue, I was holding on for dear life,” he mentioned about the end of the race. “I was trying to just not make mistakes. One and two was a little hairy because I didn’t feel if I slowed down to the hit the bottom I had enough speed or enough drive, unlike three and four. Honestly I didn’t even know anybody was there. I was just driving the wheels off it.”

Hodnett held on to earn the eighth spot in the overall points for the first night. That puts him squarely on the bubble for making the A-Main or starting at the front of the B-Main on Saturday night.

Shaffer Went For It; Finishes Second to Hodnett

It wasn’t for lack of effort on Shaffer’s part as to why he came in second.  He tried to stick his No. 49x on the last lap through the middle of turns one and two, but Hodnett was just too strong.

“I was giving it all it had,” said Shaffer. “Greg was rolling pretty good and I was getting some pressure from that young guy (Larson) over there. He made me get my elbows up.  I got to run the car a little harder than I thought I could run it. We got close there. I thought we had a shot, but Greg wasn’t making any mistakes. That’s what it takes here.”

Like Hodnett, the season has had it’s fair share of ups and downs for the Aliquippa, Pa., driver. Shaffer peaked early winning at Mansfield while coming home with $100,000. From there his season has been very inconsistent.

“It’s pretty wild when your season starts off so great and things were really going good and then fell off,” cited Shaffer. “We did a lot of changing around with the cars. We put seven or eight different cars together trying so many different things. To come in here and be struggling, it isn’t a good time to be trying a lot of stuff, but it’s all working out. We’ve been working really hard at it too. It seems like hard work pays off. You just got to keep plugging away no matter what.  You can’t give up.”

Shaffer looks to be squarely into the main-event on Saturday as he sits sixth in the standings after the first night.