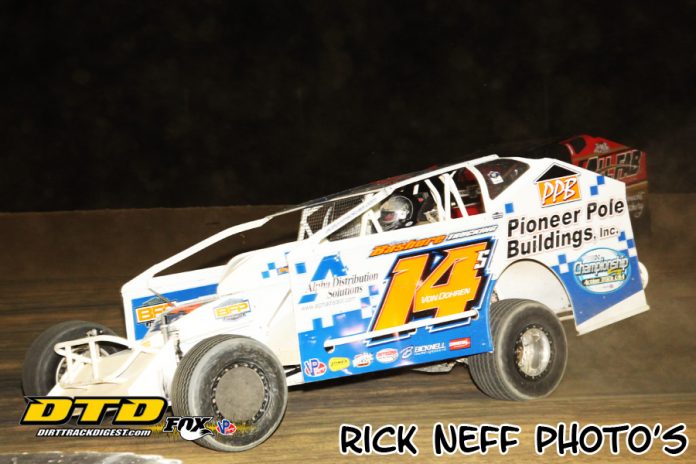 DELMAR, DE – Craig Von Dohren throttled by polesitter Ryan Watt to collect the $4000 to win Full Throttle event. Von Dohren immediately put pressure on Watt from lap one, as Von Dohren stuck to the bottom of the speedway, as Watt coasted through the middle of the racey surface.

The two went head-to-head, as Von Dohren would get under Watt but could not complete the pass.

By lap 10, the two leaders began hitting heavy lapped traffic. After two laps of navigating the traffic, Von Dohren made an invasive move and split a lapped car, with Watt on the bottom and Von Dohren to the top of the racetrack. Von Dohren would brush the back straightway wall, but ultimately complete the pass for the lead.

Von Dohren began stretching out his lead over Watt to nearly one second, with Jordan Watson, HJ Bunting, and Jimmy Horton III completing the top five.

Bunting began challenging Watson for the top-three position but would fall victim to a right rear flat tire on lap 18.

Ironically, all three made the right-hand turn into the pits with mechanical failure on lap 18.
A single caution flag of the event would regroup the field. On the restart, it was Kyle Fuller who was putting pressure on veteran racer, Horton, for the fourth position. The two battled side by side, with Fuller running the bottom of the race track.

With five laps remaining, Von Dohren hit dense lapped traffic, but had no threats from Watt or Watson. Von Dohren collected the payday with Watt, Watson, Horton, and Kyle Fuller rounding out the top five.

“It surprised me that Watt was not right there,” said Von Dohren in victory lane. Despite the perfect track conditions and well-balanced purse structure, it was obvious that car counts were a concern for the event, with only 16 big blocks registering. “It baffles me to get only 16 cars tonight,” said Von Dohren. “It is a real shame to not get the support down here tonight.”

“I thought we had a pretty good car, but we brought our big small block and really needed the big block tonight,” said Watt in victory lane. Watt added to Von Dohren’s disappointment with racer support, stating, “I don’t understand why we do not have more cars here tonight. The track is racey and it is good on tire wear.”

Jordan Watson rounded out the top three in Dale Hawkin’s No. 83 machine after suffering significant damage just two nights before. “I’m really happy with a third place run tonight. We just got this car on Monday night. I think we now know how we can make this car a lot better in the future,” said Watson.

James Hill did continue his dominating season in the Modified Lite division but had to contend with Brandon Dennis who was competing in Hill’s second car. Dennis took the lead on lap one and battled Hill for nearly every lap of the 15-lap feature event. The two swapped lines and positions, drag racing down the straightaways. Hill ultimately passed Dennis in turns one and two on the last lap. Jerry Barker, Aaron VanVorst, and Jacob King rounded out the top five.