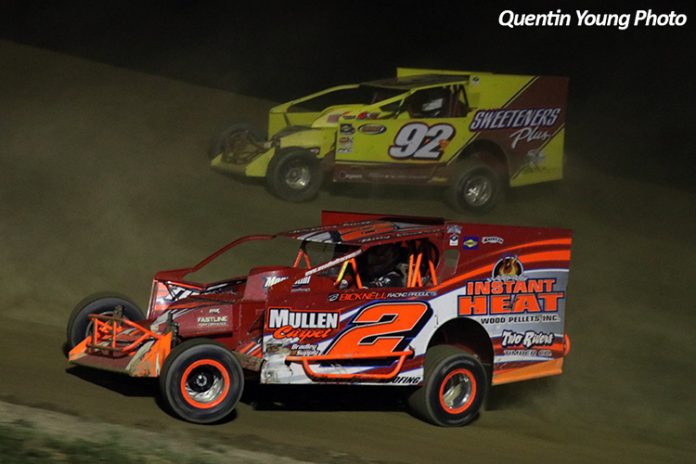 For the first time in the event’s four-year history, a hometown boy got it done.

The Westfield, Pa., driver climbed to the roof of his Kevin Chilson-owned No. 2 Bicknell after holding off the advances of the Northeast’s winningest Modified driver: Matt Sheppard.

“I have so much respect for all these guys,” Van Pelt said after heading the podium. “I haven’t had much luck in this race since it came to my home track. To win against these drivers, it means a lot to me.”

Van Pelt survived a slew of challenges to add his name to the STSS win list.

The NAPA Auto Parts of Addison and Corning, Two Rivers Timber and Maple City Dodge ‘Hustlin’ the High Banks 54’ was postponed by 24 hours from its original date of Wednesday by heavy rain. Thursday brought sunny skies and a healthy crowd to take in the action.

A field of 41 STSS Modifieds was slimmed down to 27 for the start of the 54-lap main event, Race No. 5 of the series’ Halmar International North Region.

A redraw of top heat-race qualifiers put New Jersey’s Ryan Godown on the pole for the main. Godown, who is a past STSS winner at Woodhull, put the Searock No. 26 into the lead at the outset and paced the opening 16 laps.

Rolling off third, Van Pelt waged war with Billy Decker before finding the outside to his liking to take second on lap 16.

One circuit later, BVP swept around Godown to take over the lead.

All eyes, meanwhile, were on 13th-starter Matt Sheppard in the Sweeteners Plus No. 92s.

Sheppard took fourth on lap 19, third on the 20th circuit and second on lap 21 as the leaders negotiated heavy lapped traffic. Sheppard peeled off to Van Pelt’s inside on several occasions before a series of yellows on lap 25 slowed the pace momentarily.

Van Pelt was able to maintain his edge through three tries to resume competition and led the $200 Superior Remodeling Halfway Lap.

The final 29 laps of the race were slowed by only two yellows. Van Pelt found his home running the top of the high banks lap after lap.

The final opportunity for Sheppard came on the 52nd of 54 laps when Mike Mahaney slowed on the backstretch to draw the caution.

Van Pelt drew away by a car-length to cement a $5,600 payday – $5,400 from the posted purse and the aforementioned halfway money.

Sheppard, of Waterloo, N.Y., completed his drive from the seventh row in second spot, worth $3,000. Andy Bachetti of Sheffield, Mass., drove from eighth position to challenge the leaders late in the distance, filling out the podium in third.

Point leader Billy Decker of Unadilla, N.Y., ran inside the top-five for the entire distance with his Jeremy Smith Racing No. 91, finishing fourth and track regular Dillon Groover of Beaver Dams, N.Y., completed the front five.

Finishing sixth through 10th, respectively, were Mat Williamson of St. Catharine’s, Ont., who started 10th in the Behrent’s Performance Warehouse No. 3; 24th-starter Cory Costa of Corning, N.Y., who earned the Hard Charger distinction; series regular Nick Nye of Groton, N.Y.; Mike Bills of Woodhull, N.Y., in the Herrington Motorsports No. 1; and Donnie Lawson of Addison, N.Y., with a 22nd-to-10th drive.

In the accompanying 25-lap STSS Crate 602 North Region event, Dustin Jordan made a new career highlight. The Speedsville, N.Y., driver picked up a $1,000 payday by holding off the relentless advances of Kyle Rohner in the second of five North Region events.

“It’s a dream come true to win one of these races,” Jordan exclaimed.

Jordan started from the pole in the 25-lap event and set the pace. Kyle Rohner broke into second at the lap-15 mark and gradually drew in on the leader. Rohner was working the inside relentlessly when a yellow on lap 23 provided a brief respite for Jordan.

“I was glad to see that yellow,” he said.

On the restart, Jordan held off Bushkill Falls, Pa.’s Rohner for the STSS score, with Casey Pavlick, Jimmy Zacharias and Will Eastman finishing third through fifth, respectively.

Four heat races were set for the 38 STSS Crate 602 Sportsman on hand with Zacharias, Stacy Jackson, Leo Fotopoulos and Eastman taking the wins. Consolations were split by John Sekoll and Jacob Dgien.

Rick Laubach drew No. 1 to earn the pole starting position in the first STSS Modified heat. However, Laubach lost a drive shaft in the Ryan Kerr-owned No. 1K during hot laps. He missed the call for his heat race and drove from last (ninth) in the second consolation to qualify. He salvaged a 14th in the feature….

The WELD Wheels Hard Luck Award went to J.R. Hurlburt, who spun off the top of turn three leading the third consolation and failed to make the feature event….

Anthony Perrego’s drive to the front ended on lap 44 with a broken rear-end on the Brian Smith-owned Superior Remodeling No. 44….

Racing resumes for the Short Track Super Series on Tuesday, August 14 with the Recovery Sports Grill ‘Stampede at ‘toga’ at Albany-Saratoga Speedway in Malta, N.Y., offering $5,000 to win, $1,000 for 10th and $400 to take the green flag for 50 laps plus a fully paid B-Main and the opportunity to race for $7,500 to win and $500 to start should 56 or more STSS Modifieds participate. Sportsman, under track rules, complete the program.