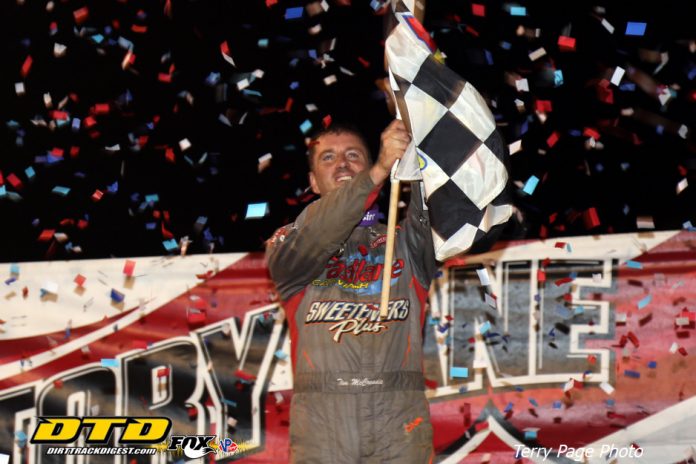 UNION, KY – Tim McCreadie broke through on Thursday night at Florence Speedway to win his first Lucas Oil Late Model Dirt Series event of the season. McCreadie led all 50 laps, holding off Bobby Pierce in the final circuits to take the win in the Sunoco Race Fuels North/South Shootout presented by Lucas Oil.
McCreadie, the reigning Sunoco Race Fuels North/South 100 Champion flashed across the line just 0.759 seconds ahead of Pierce. Nick Hoffman, Josh Richards and Scott Bloomquist rounded out the top five.
Pierce moved into second with nine laps to go, overtaking Hoffman who had held the position since the opening circuit. Pierce then tracked down McCreadie, but despite a last lap ditch effort to take the win, fell just short of victory. Hoffman, an open wheel modified standout, claimed his first-career Lucas Oil Late Model Dirt Series podium finish.
McCreadie, who became the fourteenth different winner on the Lucas Oil Late Model Dirt Series in 2018, saluted the fans in victory lane. “Its amazing how things can turnaround. We have kind of meandered around all year. I just haven’t driven it good enough this year. These guys have put together a great piece all year. We went back to the chassis and motor combination we ran last year, and it’s really paid off the last two nights. I took two weeks off and I was with my family, but the crew have been working their tails off in the downtime we had.”
“I could see my crew chief Phillip [Snellen] and I could see him telling me that Bobby [Pierce] was closing. I don’t know if we could have held him off, but we did. Sometimes I am not the most confident person in the world, it’s the crew that keeps me going and family keeps me feeling good at home. This is a tough life for sure. I appreciate all of the fans cheering us, it makes it all worthwhile.”
Pierce, who made one of his customary late-race charges, came up short in his bid for the win. “That was a lot of fun. I really had to kick-it up there at the end. It was a great track tonight. Thanks to Josh King and the whole track crew they never stopped working on this track all day and night. I am sure another night working on it the track can be even better tomorrow night. Congrats to T-Mac on the win. Thanks to everybody who works on this car at Dunn-Benson Motorsports.”
Hoffman, who made his first dirt late model start a year ago in the Sunoco Race Fuels North/South 100, earned a hard-fought third-place finish. “It feels good to get two heat wins here the last two nights and then to come back with a podium finish tonight. I had a good car last night. This is something to build on heading into this weekend. He [Pierce] slid me there, he was faster up top, so I just decided not to slide him back.”
The winner’s Coffey-McCreadie Enterprises-owned, Longhorn Chassis is powered by a Pro Power Racing Engine and sponsored by: Sweeteners Plus, Popejoy Inc. Plumbing, Heating and Electric, FK Rod Ends and Penske Shocks.
Completing the top ten were Ricky Weiss, Darrell Lanigan, Hudson O’Neal, Earl Pearson Jr. and Dale McDowell.
Lucas Oil Late Model Dirt Series
Race Summary
Thursday, August 9, 2018
Sunoco Race Fuels North/South Shootout – Presented by Lucas Oil
Florence Speedway – Union, KYMiller Welders Time Trials
Fast Time Group A: Bobby Pierce / 17.328 seconds
Fast Time Group B: Brandon Overton / 17.143 seconds (overall)Eibach Springs Heat Race #1 Finish (10 Laps, Top 3 Transfer): Tim McCreadie, Bobby Pierce, Dale McDowell, Gregg Satterlee, Chad Stapleton, Tyler Erb, Eric Wells, Robby Hensley, Michael Brown-DNS