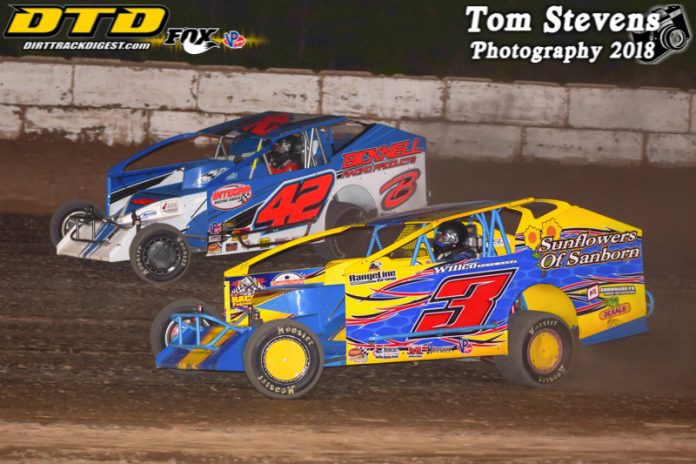 “The Professor” John Smith and “Mr. Small Block” Pete Bicknell brought the Krown Undercoating Modifieds to the green flag for their 30-lap feature with Bicknell showing the way. Ryan Susice passed both Jesse Cotriss and Scott Kerwin to move into fourth place on lap two. Matt Farnham would battle with Smith for second and would complete the pass on lap four, with Susice moving into third. John Smith would stop on the backstretch to bring out the caution on lap five. The early race restart would see Bicknell back into the lead as Farnham, Cotriss, Susice, and Allan Wills raced in the top five. Phil Vigneri III, Chad Brachmann, and Greg Martin came together, in turn, one to bring the caution back out on lap six. Bicknell would once again take command of the field as a four-car battle developed for fourth place between Jesse Cotriss, Rick Richner, Erick Rudolph, and Tommy Flannigan. The leaders would pull away from the balance of the field as Bicknell had over a 1.5-second lead throughout the second half of the event. Phil Vigneri III would bring out the caution with seven laps remaining, erasing the lead Bicknell had over Farnham. The late race restart would see Erick Rudolph make a bold move to move into third place after passing both Cotriss and Susice and would challenge Farnham for second. Bicknell would lead the final seven laps to score his fourth win of the season. Rudolph would edge Farnham for second place with Susice and Cotriss completing the top five.

Darrell Borkenhagen and Austin Susice shared the front row for the 25-lap feature for the Investors Service Sportsman with Susice jumping into the early race lead. With Susice up front, Cameron Tuttle raced in second and was contested behind him with James Henry, Brett Senek, and Derek Wagner. Henry and Tuttle would battle for second with Henry taking the position on lap seven and Senek would take third away on lap eight. Rookie Mark Harsch spun and hit the turn three wall on lap 12 to bring out the caution. James Henry would take the lead away on the restart with Brett Senek moving into second. Henry, Senek, and Chris Burek battled for the lead. Henry would clear into the lead as Burek would take second away from Senek on lap 15. Henry would hold off Burek, Senek, Dave DiPietro, and Derek Wagner to score his second Ransomville win of 2018.

Brandon Sherwood and Pat O’Keefe were on the front row in the 20-lap feature for the KiPo Chevrolet Street Stocks with Sherwood in the lead. Pete Stefanski would take the lead away from Sherwood on lap two as Cory Sawyer, Pat Dell, and Jordan Moden raced in the top five. “The Huckster” Cory Sawyer went three-wide with Stefanski and Sherwood to take the lead on lap five. Stefanski would regain the lead on lap seven. Sawyer would bump Stefanski in turn one, causing Stefanski to spin and would bring out the caution on lap eight. As a result, Sawyer would be sent to the rear of the field. Mike Kramarz would take over the lead on the restart with Jordan Moden racing in second. Moden would take the lead away on lap 11, with Jason Fontaine battling with Kramarz for second place. Moden would hold off a late charge from Fontaine and Stefanski to score his first career win.

Brandon Close and Ashley Blech brought the Gippster’s Collision 4 Bangers to the green flag for their main event with Blech showing the way with qualifying heat race winner Matt Hornquist jumping into second place. The caution would come out on lap one after Nick Tarnowski’s motor let go. The restart would see Blech back in the lead with Hornquist, Brandon Potter, Steve Matson, and Chad Desso raced in the top five. Blech and Hornquist would pull away from the field as “Mr. Peanut” Ryan Plate raced into third place. Plante, Chris Leone, and Steve Matson caught Hornquist and race leader Blech and would put on a great battle for the lead for several circuits. Plante would take the lead on lap 11 with Leone running in second. Plante would score the win over Hornquist, Ashley Blech, Brandon Potter, and Chad Desso.

David Fingerlow and Orval Harris were on the front row for the Stevenson’s Hardware Novice Sportsman feature with Fingerlow taking the lead. Cody Wolfe would spin in turn one to bring out the caution on lap three, as Wolfe was challenging Orval Harris for second place. The restart would see Fingerlow in the lead as Bubby Pawlak took over second place. Fingerlow and Pawlak would pull away from the field in the late going. Fingerlow would go on to score the win, his fourth of the season.

NEWS AND NOTES: Lap sponsorships are available for the King of the Hill Street Stock 100, BEI Lightning Series 40, and the Gippsters Collision 4 Banger event on September 14. Laps are $20 to purchase and you can contact the Speedway Office, see Ashley from 50/50, Jeff Anstett, Jenn Martin, or Steve Petty to purchase.

Racing returns on Friday, August 17 as Sunflowers of Sanborn, Firth Jewelers, Jeffery Machine and Performance Mfg. presents the 40-lap Sid Jeffery Memorial for the Modifieds. It is also Hawaiian Night plus a full card of racing! Pit gates will open at 5 pm with grandstand gates will open at 6 pm and the first green flag of the night will fly at 7:15 pm.