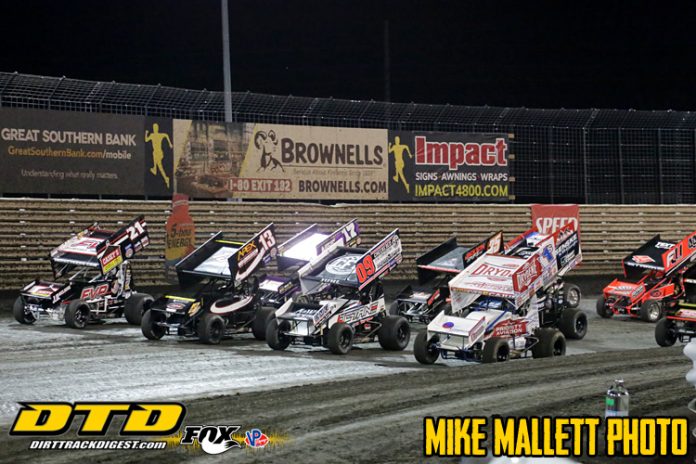 KNOXVILLE, IA – The Friday night format at the Knoxville Nationals the last few years has allowed for those that had difficulty earlier in the week an opportunity for a mulligan. The 2018 edition of the race was more of the same as Logan Schuchart, Brian Brown and others locked in to the big show on Saturday.

Schuchart set fast time on his qualifying night, just missed the feature from his heat before he seemingly made it through the B-Main only to have driver error cost him his place in the A-Main and more than likely a spot in Saturday night’s feature. Schuchart forgot to go to the scales after the B. He was promptly disqualified.

Schuchart took full responsibility for the mistake, but the team quickly regrouped to take the win on Friday night which locked him into the 17th spot for Saturday’s race.

“It was tough day the other day,” stated Schuchart. “We are not going to start as far up as maybe we would have the other night. Our team gave ourselves another shot off of my mistake. We’ve been in this position the last two years starting in the back and it hasn’t gone that well. We are just looking to improve on that and go forward tomorrow night.  To get the car as good as we did tonight then it’s on me to do the rest.”

Friday night’s main was a good one as Schuchart beat out local favorite Brown. The pair swapped the lead multiple times early in the race before Schuchart drove away once they got to traffic.

“Brian, you expect him to be fast at Knoxville,” mentioned Schuchart. “I was just going to run the bottom for a couple laps and start down there. I watched the B-Main and the 39 (Spencer Bayston) car was really fast down there. That was my plan to run down there until somebody passed me. He passed me on the top, but I was able to get back by him on the bottom. I wasn’t sure where I needed to be on the race track. It wasn’t until lapped cars that I could move around a little bit. I felt just as good on the top as I did the bottom. It was an awesome race. Brian and I raced each other clean. We went back and forth. It must have been a great show for the fans. I’m happy to win a race at Knoxville, this is pretty awesome.”

Brown’s team suffered a serious vibration on his qualifying with the car and they timed in 38th quick. At that point his lot was cast and the team decided to call it a night. Even if he continued on and won his heat and the A-Main there was no way he was going to make the feature Saturday.

Thursday night the team changed everything on the car, except the driver. They changed the motor, driveline, fuel pump, fuel tank and more. They were searching for the vibration. They still aren’t sure what it was, but fortunately they found it before the heat race on Friday night. That’s all he needed as he let things play out to finish second.  That was good enough to take 18th spot in the feature.

“I’ve never been content running second at Knoxville, but tonight I am,” said Brown. “It gives us an opportunity to come back tomorrow. Donny Schatz has won this thing from 23rd before, Jason Johnson won this race last year. I was running sixth and he passed me at halfway. It definitely can be done.”

Paul McMahan was very vocal of his dislike of the format that allows for the mulligan on Friday night. With that said, he wasn’t going to turn down a starting position in Saturday night’s big event.

“To lock this thing in tonight, yeah I would have rather done it on Wednesday night,” commented McMahan. “I was a guy that when they came up with this format saying I didn’t like. I mean I like it tonight, but I don’t think we should get a mulligan over other guys. We are starting in front of some guys that busted their asses all weekend long. Here we are starting in the A-Main and they are in the B-Main. It’s the way the play the game and we are going to play. Tomorrow I’m going to get back in, take that A-Main and get after it.”

At the midway point of the feature event it wasn’t a sure thing that Matt Juhl was going to get a guaranteed spot. Juhl was in a dogfight with Sheldon Haudenschild. At one point he fell back to fifth before doing what was necessary to take the final spot from the A-Main into the big show.

“I’ve been coming down here the last two years running weekly shows and it’s paid off,” cited Juhl. “We get faster every week. We’ve been good and it’s unbelievable to say that I made the A-Main on Saturday.”

The final spot handed out on Friday night went to California native Dominic Scelzi. Scelzi was able to work his way around Brooke Tatnell in the 20-lap World Challenge feature. The win came with his ‘golden ticket’ to the feature event. Needless to say he was pumped to lock into race on Saturday.

“I’m just happy to be here to be honest,” he said from the post-race press conference. “To put together a night after what I thought was less than a stellar performance in the first main-event is huge. It is something I needed as a driver right now. To get in the main-event, I’ve been dreaming of the moment to start the Knoxville Nationals my whole life. I was so down in the dumps because of the misfortune on our preliminary main, but to make it tonight … I think this is the way it was supposed to be.”