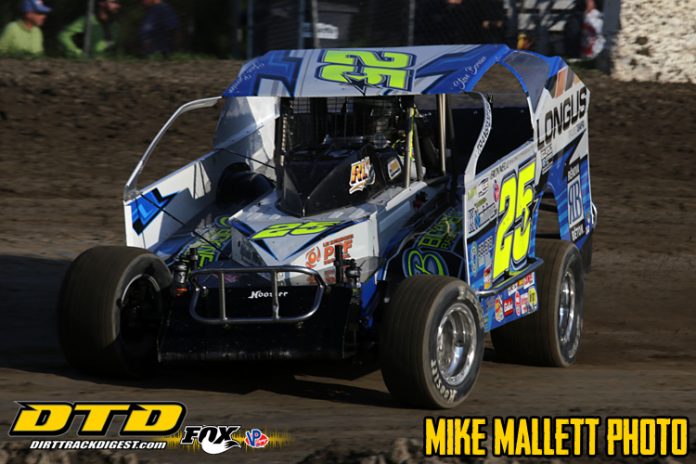 PLATTSBURGH, NY –Patrick Picotin has been knocking on the door of victory lane all season long at Airborne Park Speedway.

Saturday, the door was open and he entered.

The Drummondville, Quebec driver scored his first win in the third round of the 50-lap Unique Sportsman Series between Airborne and Mohawk International Raceway.

Picotin started on point after he pulled position one in the redraw. Picotin was challenged right from the start however, as Nick Heywood put the early pressure on the Quebec driver.
The battle intensified at lap-40, when Picotin worked into heavy lapped traffic with series point leader Shane Pecore breathing down his neck. The pair weaved through the slower cars until lap-46, when Pecore was able to get around Picotin, but a yellow flag reverted the field back to the last completed lap.

On the restart, Picotin chose the inside lane and aced the restart, driving away to a $1,000 victory. Pecore held on for second with David Schilling rounding out the podium. Rookie driver, Dylan Rabtoy started in position 23 and raced up to fourth, Jack Speshock was fifth.
Steve Bernier collected his third win of the season in the Egglefield Ford 358-Modified division.


Bernier was aggressive early in the race and had a comfortable winning margin. Jessey Mueller muscled his way to the second spot, while Chris Raabe finished third. Marc Johnson and Dany Gagné finished fourth and fifth, respectively.

Cam Gadue won for the fourth time in the Mini-Mod division, while Caleb Tourville made a last lap pass to win the Strictly Stock feature.