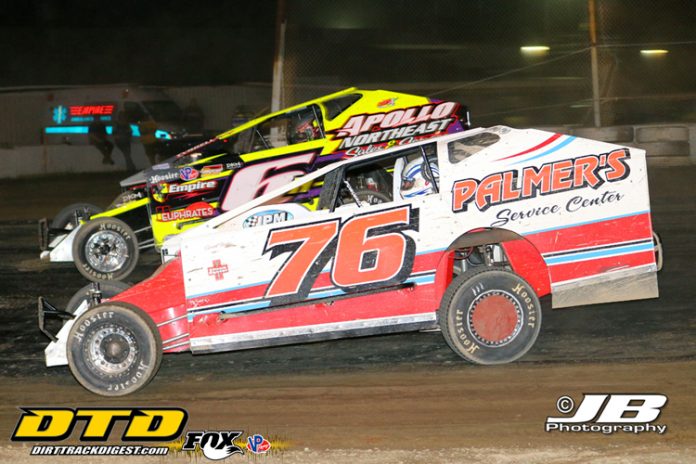 FONDA, NY – With points on everyone’s mind and finishing positions important towards the 2018 track championships, drivers took to a fast track at the Fonda Speedway on Saturday evening after day long rains soaked the speedway grounds. At the end of the evenings racing program, Bobby Varin was the race winner for the fourth time this season and the 64th time of his illustrious career at the “Track of Champions.”

“We hurt some pistons in our good motor in the crash here last week,” Varin told the crowd in victory lane. “But this is the same car that was in that wreck last week, including the same body panels that were all bent up. My thanks to all my crew that worked so hard this week to get this car back together for tonight.”

Shaun Pangman started the 30-lap modified feature on the outside of the front row and took advantage of his starting position to take the lead at the drop of Joe Kriss’ green flag with Rocky Warner in the second spot. After a two lap side by side battle for the third position, defending track champion Tim Fuller was able to get the spot away from Pep Corradi on lap eight.

Pangman was in lap traffic by the lap 10 mark in the event with the red flag out for Don Bellen who flipped his car over in turn two after contact from another can sent his car first into the wall between turns one and two and then flipping over a couple of times afterwards. Bellen landed on all four wheels and was not injured in the wreck.

Another yellow flag flew on the restart when Corradi made slight contact with the rear end of point leader Josh Hohenforst’s car, sending Hohenforst sideways with Corradi ending up in the wall. Hohenforst straightened his car out and was able to restart the event while Corradi was done for the night. Bobby Varin was the fourth place car on the restart after starting 10th and moved quickly into the third position once the green flag flew again.

At the halfway point, Pangman continued to lead the event followed by Varin who was now the second place car, Warner, Fuller, and Hohenforst. Varin got up to the rear bumper of Pangman on lap 26 and one lap later he used a slide job pass to get by Pangman for the race lead in turn four. Varin pulled away from that point on to another win in the Palmer’s Service Center #76 Teo car followed by Fuller who got by Pangman on the final lap for the second position, Pangman, Warner, and Hohenforst.

The 25-lap sportsman feature was a wild one featuring seven cautions but fortunately nobody was hurt in any of the wrecks. It all started with pole position starter Aaron Burton taking the early race lead with Ricky Quick in tow. Cody Clark started the event in the eighth position and was the new second place car on lap four after getting by Quick for the spot.

The first yellow flag was out on lap five for point leader Tony Farone and Josh DeMagistris in turn two followed by another caution on the restart for a multi car wreck in the same turn involving Quick, Jeremiah Munson, Mark Mortensen, DeMagistris, and a few more cars with Mortensen the only car able to continue on in the event.

Zemken got by Burton for the second position on lap nine while Clark was still leading the event but it was Zemken who brought out the next caution shortly afterwards. Zemken was able to continue on at the rear of the field. On the restart, Mortensen went from the 10th position to fourth after getting by several cars on the outside and then going in between two cars for the fourth position in turn four.

On lap 13, Mortensen got by Burton for the second position with Clark a good distance ahead at that point. A red flag on lap 14 changed all that and bunched up the field after Zemken flipped his car on the front stretch after making contact with the inside wall going into turn one. Zemken was okay after the wreck but his race car was heavily damaged.

On the restart, Mortensen got by Clark for the race lead but the race to the win was far from over with the yellow flag out again one lap later. On this restart, Mortensen and Clark remained side by side for two laps before Clark was able to clear Mortensen for the lead at the line as lap 17 was completed. After starting 11th on the grid, Brian Calabrese made his way up to the third position on lap 18 after getting by Chad Edwards for the spot.

The final yellow of the event came with three laps remaining when Nick Scavia and Tony Farone got together in turn three and ended up in the turn four wall. Both cars suffered heavy damage with Scavia trying to come back out to finish the event but the damage to his car was too extensive and he was forced to retire from the event.

Under caution, Mortensen came to a stop in turn one, out of fuel, and was pushed the hot pit area to get a splash of gas. He restarted at the rear of the field and finished the event even though his chance for the win was now over.

Clark cruised to his first win of the season and the sixth of his career in the division over Calabrese, Edwards, Burton, and David Manchester. In post-race inspection, Burton was light at the scales moving DeMagistris into a top five finishing position.

“That felt like an endurance race,” Clark said in victory lane. “Mark (Mortensen) was fast, when he got the lead and started to pull away, he was gone. I need to thank everyone that helps me with and on this car, I could do it without them.”

Ivan Joslin led at the start of the 20-lap pro stock feature with Randy Cosselman second at the completion of lap one after starting third. On a restart after a caution on lap seven, fourth place starter Josh Coonradt was the new second place car and one lap later on the outside of turn four Coonradt was the new race leader.

At the halfway point in the event, Coonradt continued to lead followed in the top five by Joslin, seventh place starter Luke Horning, fifth place starter Chuck Dumblewski, and eighth place starter Kenny Gates. On lap 12, Joslin was three wide in the middle for the second position and was able to hang on to it at that point until the next lap when Dumblewski was able to get by.

With the white flag in the air, Joslin and Horning made contact on the front stretch with Gates and Dean Charbonneau also involved resulting in the red flag coming out. Charbonneau got airborne after getting into the side of Gates and went into the turn one wall taking down the safety light just above the concrete wall. No drivers were injured in the wreck with Gates able to restart at the rear of the field.

Coonradt led the final lap to his second win of the season and the second of his career in the division over Dumblewski, Justin Knight, Horning, and Gates.

“That was a race,” Coonradt said in victory lane. “It seems like every time I get in front the caution comes out, and with one or two laps to go you never know who is behind you so I was just grinding my teeth until the checkered flag.”

On Monday evening, August 13th the Fonda Speedway returns to action with “The Jack” event which is part of the Super DIRTcar Series this year with the winner of the race guaranteed the 12th starting position at Super DIRT Week in Oswego this October. Also on the racing card will be the “Hondo Classic” for pro stocks, and a “Street Stock Challenge” with warm-ups starting at 6:45 p.m. followed by racing at 7:15 p.m.