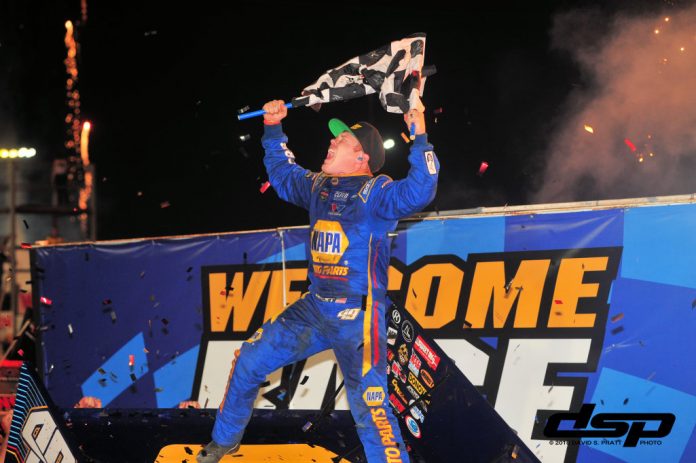 KNOXVILLE, IA – Brad Sweet had to keep two of the greatest sprint car drivers in the world at bay in the 58th edition of the Knoxville Nationals on Saturday night at Knoxville Raceway. Sweet was first able to win the battle with Kyle Larson before finally holding off Donny Schatz in a two lap sprint at the end to win his first ever Knoxville Nationals.

Sweet was simply unstoppable at the Marion County Fairgrounds during the Nationals. He won the Capitani Classic by leading every lap before backing that up by doing the same on his qualifying night. In the finale he led all but two of the 50-lap distance to pocket his first $150,000 paycheck.

“How about that shit boys and girls,” said the elated Sweet from victory lane. “I held off two of the best in the business. This car was flying all weekend. It wasn’t easy against the hardest competition in the world. I made a few mistakes…Donny was breathing down my neck. I thought I better hit these two laps on the bottom perfect. They weren’t perfect, but they were good enough to get the win.”

Sweet admitted afterwards that he was a ball of nerves throughout most of the day as he waited to finally get the racing underway. Prior to start of the racing program, Knoxville Raceway played a fitting tribute to former Nationals champion Jason Johnson. Sweet credited that video with helping to put him at ease.

“I was nervous all day,” cited Sweet. “That video of Jason Johnson came on and I teared up. My mind went really calm. I knew what Jason would do…just run the shit out of it! That’s what I did. I sure hope he’s looking down smiling. I dreamed about the feeling he had when he won it. It’s unbelievable. I just want to cry, faint, hug, kiss and drink lots of beer!”

Sweet started on the pole of the feature go and quickly asserted himself as the pacesetter. He amassed a huge lead in the early laps which at times reached over four seconds. While at the front, Larson and Schatz waged a battle for second.  Schatz was able to keep the spot during much of the first half of the race.

Sweet was already in slower traffic by the time the red came on lap nine for a flipping Rico Abreu. Abreu’s No. 24 hopped over the cushion causing him to roll violently in turn three. He was able to climb from the car unscathed.

The field bunched up for the restart with Sweet rocketing away as he’s done all week long on starts and restarts. He bolted to the bottom as Schatz and Larson resumed their duel for the second position. Schatz maintained as Larson looked for an opening.

As the race approached the halfway point, Schatz was relegated back to third as Larson was finally able to wrangle the runner-up spot from him on lap 20. The race came to the midway point break with Sweet, Larson and Schatz making up the top three in the running order.

After a brief pause to refuel the cars and change tires, the action got back up to speed with Sweet getting constant pressure from Larson. As he had done with Schatz, Larson worked him over looking for an opening to take lead. He got it on lap 28 as he blasted by Sweet for the top position in turns three and four.

Sweet was able to regain control of the race with a slide job just two laps later to work back around Larson for the lead. Larson stayed in contact but wasn’t able to mount a challenge as he now had Schatz making moves on him.

Traffic became an issue as the race reached lap 34. Sweet stayed true to what put him in this position never leaving the bottom of the racing surface. Schatz on the other hand moved himself off the bottom to work his No. 15 through the middle allowing him to gain and eventually pass Larson for second with 10 laps to go. He then began chipping away quickly at Sweet’s lead.

“I started making mistakes with about six or seven laps to go,” mentioned Sweet. “I was just hoping I had a good enough lead to hold them off.”

Schatz was within striking distance as he closed the gap significantly before one final red flag was necessary for a flipping Kerry Madsen. Madsen’s ride came to rest on all four wheels in the middle of turns three and four on lap 48. It was a now a two lap dash to the finish.

After a seven plus minute delay Sweet got the race back to green flag action. As he entered the first corner he dove to the inside with Schatz putting on the high-side hustle. He worked the cushion all the way around the race track staying with Sweet. The pair came to the white flag side-by-side.

Sweet tucked low grabbing the moisture on the bottom of turns one and two while Schatz put the car on the cushion going for the win on the final lap. He stayed with Sweet off of turn two. The pair raced even to the third corner. Sweet came off the bottom and Schatz from the top as they exited turn four onto the straightaway.

“I wasn’t sure if I wanted that green-white-checkered or not,” commented Sweet. “I really had to buckle down and hit the bottom the best I could. I could hear him on my outside. I think I held my breath the last two laps.”

At the line it was Sweet earning the victory by .133 of a second over Schatz.

“I couldn’t see him, but I could hear him,” he said of the battle with Schatz. “Not that Donny runs a lot of throttle or spins the tires. I could just hear the pitch of another engine on my outside. I just didn’t want to lose focus. I kept telling myself ‘to hit the bottom the best you can’ because if you miss it is worth half a second, but if I go a little bit slow it might be a tenth. I probably slowed down just a little to get the exit right and man … it was just enough. That’s all you need. It doesn’t matter by much you win by as long as you win.”

Schatz, going for his 11th Knoxville Nationals crown, gave his all on the final laps as he always does. He even bounced off the cushion causing the car to get briefly out of shape. He never lifted off the throttle as he tried to steal a late race win away from Sweet as he’s done to so many others at Knoxville.

“Brad had run the middle to the bottom the whole time so if I wanted to win the race I had to go somewhere he wasn’t,” stated Schatz. “I had to take the chance that Kyle was going to drive by. At that point it didn’t matter whether you run second, third or fourth. You are racing for the win. I just went to the top. There was enough there. It might have upset the car, but I guarantee one thing I didn’t lift off the pedal. I don’t think it cost us any time. I thought I had a shot, but he did a good job and hit the groove he’d been racing in. He didn’t make any mistakes. I was praying for another lap, he did a good job, he got there first and that’s what it takes.”

Larson faded late losing ground to the top two. Afterwards the NASCAR star realized that he had issues with the wing on his car which caused it to move back without any help from the cockpit. For the second year in a row he was on the podium, but not in the position he will continue to covet.

“Under the break I noticed my wing moved back about an inch and a half from where it started,” commented Larson. “I didn’t remember moving it back. I got to the lead and felt good. I made a couple mistakes and got tight so I went back down to the bottom. I was really tight on exit the last few laps before the red. Under the red I looked and my wing was more than three-quarters of the way back. I got my wing back forward, but there was not enough racing left to give these guys a run.”

Aaron Reutzel ended up in the fourth position with Tim Kaeding coming from 10th to get fifth.  Carson Macedo’s impressive week came to an end with a sixth place effort while outside front row starter Chad Kemenah finished in seventh. Logan Schuchart came from 17th to finish eighth. He was followed the line by Shane Stewart and David Gravel.