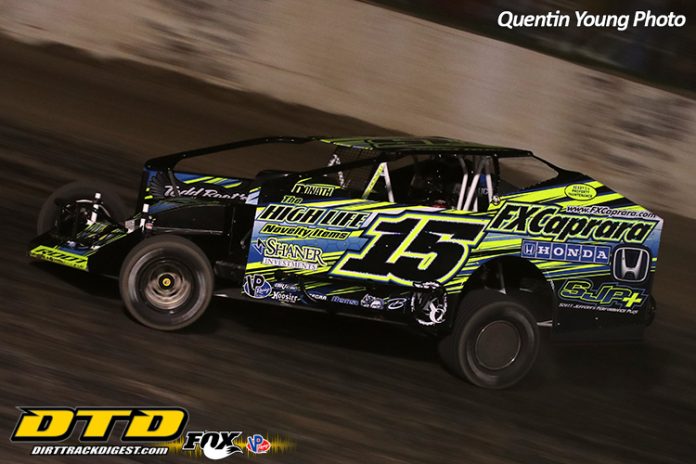 FULTON, NY – There is nothing better than the feeling of a getting new car.  Todd experienced that first hand on Saturday night at the Fulton Speedway as he drove his brand new car to victory lane.

Root darted our to the lead at the beginning of the 35-lap Small Block Modified main. After just a handful of laps, Root’s lead had grown to nearly a straightaway over the battling duo of Tyler Trump and Jeff McGinnis. With seven circuits in, McGinnis got around Trump for second, and Bobby Herrington followed through to third soon after. As the laps ticked away, Root continued to pull away, looking for his first ever Modified win in his first full season.

By halfway, Root’s advantage had stabilized at a full straight. Behind him, the battle for second was heating up, as Herrington caught McGinnis and Tim Sears Jr. was catching both. The trio battled hard for the runner up spot, with McGinnis narrowly hanging on to the position for the time. On lap 30, the three drivers went three wide for second, with Sears grabbing the spot and quickly motoring away.

While Sears climbed from eighth to second, he was still a straightaway behind Root and had very little time to catch him. When the checkered flew after 35 caution-free laps, it was Todd Root walking away to his first 358-Modified victory in his short career. Tim Sears Jr. crossed a distant second, followed by Jeff McGinnis, Bobby Herrington, and Pat Ward.

Root first began running Sportsman in 2013, rapidly becoming a top driver in the area. Late in 2017, Root began testing the waters of the 358-Modified division, winning his heat at last year’s Outlaw 200 and running in the 358-Modified event at Super Dirt Week.

“It helped with the starting spot, and the track was really good, but you can’t really take a whole lot away beating these guys,” Root said. “The car was brand new this morning. We’ll be back with the 11 (Root’s normal car) next week, we’re just getting some stuff together for the end of the year. It’s just another car we’ve been putting together since winter and decided to finish it up this morning.”

In yet another Late Model thriller, Sean Beardsley slid around the top of Jason Parkhurst with four laps to go for the lead, then holding off Chris Fleming and Tim Sears Jr. to win by half a car length. However, Beardsley was light on the scales and the win was then awarded to Fleming.

Once Dorian Wahdan got by Richie Riggs in the first Sportsman event, he opened up a solid lead over the rest of the pack. As fast as it opened up, Jessica Power was able to close the lead, but it wasn’t enough, as Wahdan claimed his first ever Sportsman win. Alan Fink reached the lead at halfway in the second Sportsman feature, then cruising away to another victory in dominating fashion.

Scott Mallette’s first trip to Fulton was a success, as he claimed victory in the first Novice Sportsman event, grabbing a trophy from Fulton to add to his two from Utica-Rome. Kierra Backus held off challenge after challenge from Robert Gage and Quinn Wallis for her first ever triumph.