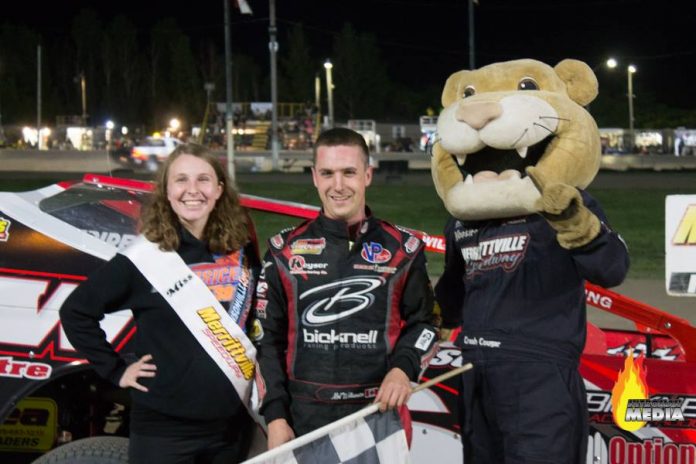 “That was pretty cool when we went three wide on that restart,” said Williamson in Victory Lane after winning the 35 lap 358 Modified Feature, “I don’t remember being in a race like that here in quite some time … I hope the fans enjoyed it!”

A caution on lap 18 slowed the pace after front runners Mike Bowman and Rick Richner both headed to the pits but were able to rejoin the field.


Fred Carleton was first to lead the final event of the night in his Niagara Employment Help Centre #96 until Chad Brachmann took control on lap 5. By lap 15, Brachmann had pulled away to almost a full straightaway lead on the field until the lap 18 caution.

Brachmann resumed control of top spot on the restart with Gary Lindberg in second. While the two were swapping the lead several times – the action behind them was just as furious with racing three and four wide for third spot.

When things settle down, Mat Williamson had the spot and advanced to second on lap 23 and set his sights on Lindberg.

Brachmann, Ryan Susice and Pete Bicknell would round out the Top 5.

Zach Bleich was first to lead the 20 lap Hoosiier Stock Feature with action through the field three wide. Just as Dave Bailey became the new leader caution would slow the field with one lap complete.

Bailey resumed control on the restart and with Murray following – pair quickly opened up a 10 car lead on the race for third between Brad Sheehan and Kyle Pelrine.

To lap 10, Murray closed in on Bailey and tried the inside on lap 13. The two were side by side with Murray the new leader to start lap 15. A lap 17 caution had Murray out front once again with Bailey trying a late race charge.

At the finish, Murray held off Bailey by inches with Sheehan, Pelrine and Bleich rounding out the top 5.

“The track was a little more tacky then I like but the car was really good,” said Murray in Victory Lane, “I wrecked the car in the heat … thanks to Brad and our crews for getting it back together.”

“Tonight was an awesome night after the last few weeks,” said Alex Riley in 4 Cylinder Victory Lane, this is what we needed to get the season back on track.”

Vincent Pagnotta set the pace at the start of the 15 lap Feature but crossing the start finish line to start lap 2 – the new leader was Riley. Riley would be slowed on lap 3. With Riley out front, he was missing some action behind him. By lap 10 – Riley’s lead was close to a straightaway on the race for second between Austyn Werstroh and Daniel McKay.

In the final laps, Cole Hardy challenged McKay for third.

At the finish Riley was followed by Pagnotta, Hardy, McKay and Tony Kelly.

An early caution slowed initial leader Chris Perry’s pace at the start of the 15 lap Feature for the Mod Lites. On the restart, Brent Begolo began to challenge then runner up Randy Giroux for position.

After taking the runner up spot, Begolo pulled even with Perry on lap 4 with the pace slowed once again on lap 5.

Begolo resumed the lead on the restart with Josh Sliter now pressuring the leader.

Sliter would take over top spot on lap 6. 4 laps later, the gap between Sliter, Begolo and third place Tyler Winger was about a ¼ lap each. Lap 13 could have been unlucky for the leader as the final caution slowed the field.

Sliter though remained in control of the lead on the restart and at the finish was able to open up a comfortable lead once again.

Begolo, Winger, Chris Watson and Perry rounded out the Top 5.

“John was definitely coming … he was running high and low,” said Adam Plazek who was the first driver to win his 8th Feature win of 2018, “I just had to use as much track as I could.”

The start of the 12 lap V6 Feature was delayed after Jordan Fidler was put back two spots for jumping the original start. Chris Mussat was the new leader once Starter Randy Mallory’s green flag was flying. Also flying was Plazek who advanced from his 8th starting spot to land in third in a lap and a half.

Just before the half way point, Plazek resumed control after a restart. In the closing laps, Plazek, Couture and Kevin Conley were separated by about 5 car lengths each.

At the finish, Plazek, Couture and Conley were followed by Colton Lane and Jordan Fidler.

“I’ve got to thank my crew … this was all them,” said Brad Rouse in Victory Lane for the first time of the season, “after his heat … I was helping my Baron Roofing Team Mate Jordan Cosco change rear ends.”

“I can’t thank my guys, the Rouses, the Knapps and everyone who pitched in to help us get the rear-end changed in time for the feature enough,” said Jordan Cosco in a Face Book post.

Lee Mallory was first to lead the 25 lap Feature with action behind the second generation driver three wide the first time into Turn 1. Out the other side the new leader was Dave Small.

Small would be slowed by caution on lap 3 with Ryan Ferri the new leader on the restart. Caution right away found Small back in control with Ferri battling back until caution once again slowed the pace.

Ferri resumed the lead only to be slowed quickly again. When racing resumed, the race for top spot went three wide with Dave DiPietro and Brad Rouse taking over the top two spots.

DiPietro would lead until Rouse took over top spot on lap 8 and by lap 15, the frontrunners were into lap traffic.

Closing in on lap 25. DiPietro seemed to be gaining ground on Rouse and made one last try the final time into Turn 4. To the checkered flag, Rouse was able to hold off DiPietro by a couple car lengths. Rob Knapp, Paul Gaboury and Ferri as the top 5.

Merrittville Speedway would like to thank the Niagara Employment Help Centre for the prizes for the Box Car Race prizes and to former Modified Champion and CAA Niagara Wall of Famer Davey Moore for providing the Toonie prizes to all competitors.

Congratulations as well to the 2018 Divisional Winners – Trystan McNulty, Ryan Fontaine, Brennon and Quinn Corbett whose Box Car was voted Best in Show.

To all the fans that visited Fred Carleton’s Niagara Employment Help Centre #96 … thank you for your donations that will go to support the Saturday August 25th Harry Sittler Memorial presented by the St. Catharines Husky.

Grandstands will open at 5;30 with Show Time at 7.