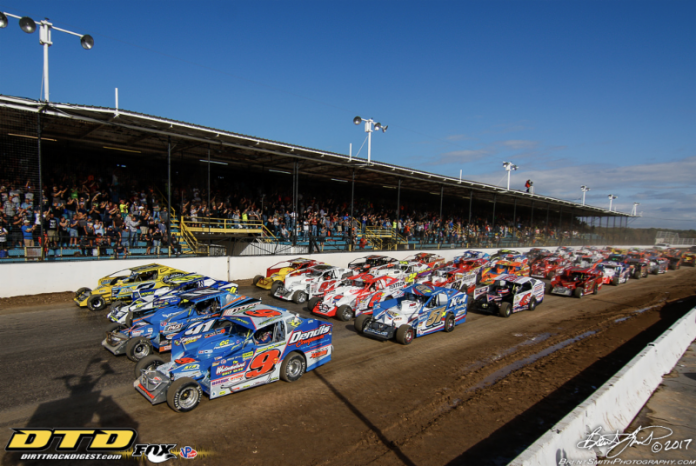 With another record setting year in the history books for Bicknell Racing Products, BRP is already gearing up for the big fall events, as well as the 2019 season.

As of August 1st, Bicknell built their final car of 2018, car no.245. Bicknell then started building their 2019 chassis’ where Billy Pauch Jr. received the very first one off the jig.

Heading into the coveted Super DIRT Week at Oswego Speedway, everyone at Bicknell Racing Products are feeling confident that it will be another solid year for their customers.

With 37 of the 2019 cars already built, a few of them will be competing at the Clay Palace.

“We will have some employees and some volunteers helping us throughout the week,” said Bicknell partner Randy Williamson. “Billy Van Pelt will be there with his father, Jim, Tyler Puchalski, Chris Buttigieg, Ted Curvin, and myself will be there all week. We’ll have four in the booth and three or four walking around talking to customers.”

Fans can get up close and personal and see all of the action unfold in the BRP tent outside of turn three, while shopping for some of the new Bicknell Racing Products apparel that will be located in the tent on manufacturers row as well as at the BRP trailer in the midway.

Drivers and fans can also look for the 2019 northeast racers trade show auction car to be on display on the Oswego grounds.

Being the third year at Oswego Speedway for Super DIRT Week, Williamson’s only hope is for the track to be in as good condition as last year.

“If we go back to the track from two years ago, it won’t be good,” he said. “The damage we had two years ago is something we don’t like to see. Last year the track was racy and had very minimal damage.”

Williamson believes the biggest thing that will be put into play this year will be tire choices.

“Tires were a question last year,” noted Williamson. “Some teams put on hard tires and it was the wrong choice. It’s going to be a question that teams will have to think about answering carefully.”

With the immaculate turnaround on the racing surface last year, Williamson anticipates the event will draw in 60-70 Big Block Modifieds to compete for the grand prize.

“I know at least 40 of our Big Block drivers are going to be there,” he said. “We’ll have about the same for the 358’s and about 60 of our sportsman drivers. That’s what we’re expecting.”

Bicknell will once again have a concrete pad with two complete scale areas set up. They will be open to scale customers from 8am until the last car rolls out of the tent at no charge.
“Hopefully all of our customers go out and run really well,” said Bicknell employee Ted Curvin. “I’m hoping best case scenario that all of our drivers run well, nothing bad happens, and we’re standing around in the tent with nothing to do. That’s best case scenario.”

Several drivers who haven’t competed at Super DIRT Week in years past will be making a rare appearance at Oswego. In years past, Super DIRT Week was always run on the mile. Now, the event is held on a 5/8-mile, similar to many short tracks across the northeast, drawing in more Saturday night racers.

“After the first year, with the track being so rough, nobody knew what to expect,” Curvin said. “Going into this year, everyone knows what they need. It’s more of a normal Saturday night deal. This track is similar to our short track setup. If your Saturday night stuff is pretty good, then you’re probably set.”