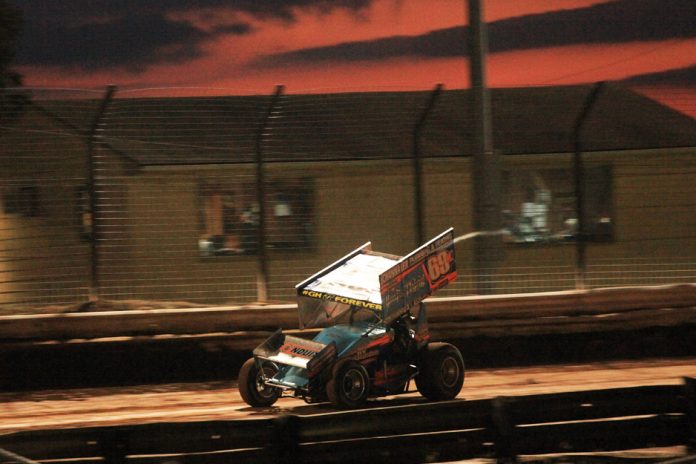 This past weekend was emotional for all involved as Sprint Car racing got back underway after a one week hiatus due to the death of Pennsylvania’s star driver Greg Hodnett. It was only fitting that a member of the Posse would get the win and that it was one of Hodnett’s closest friends in Lance Dewease. Dewease was in tears as he spoke afterwards in victory lane. “I wouldn’t call it the sweetest, but this is the greatest win of them all,” stated Dewease. “This is for Greg. Everyone doesn’t know how hard this was on me this week. Sherry, I sent her a note earlier in the week. They wanted me to speak at service and I just couldn’t do it. She came up today and gave me a big hug. Yesterday I told her to come to victory lane, I’m going to be here one of these nights. Tonight was the night. This is all about Greg. This whole weekend is all about Greg. Anybody that knew him know about how great a guy he was. Yeah, he was a great race car driver, but away from the race track he was a better person than that. My heart goes out to Sherry and the whole family.”

The win was the fourth time he’s captured the top spot of the 56 times the race has been run. Each of those wins in the evenet came a different team with this being his first win for the Kreitz team. This time they earned $56,000 for the triumph, the most he’s ever won in a race.

“I wanted one for these guys,” mentioned Dewease. “That’s one of things I’m proudest of. I’ve won it with four different owners. That is saying a lot. We always run really good in this race. We had good car here last year and had an engines failure. This year they worked hard on the engine program all year. They really stepped it up.”


Dewease’s night started the way he needed it to with a strong performance in time trials. He was third quick overall in his flight. He then went on to win the heat race and the dash giving him a prime starting spot for the main. When the 40-lap feature went green he quickly was second with Brock Zearfoss getting the jump. He eventually ran him down and passed him while racing in traffic with a daring three-wide move off of two for the lead.

Dewease kept Zearfoss at bay until the red flag for fuel came on lap 26. The restart was tricky as the pair banged wheels coming back to the green flag. Dewease remained the leader while Zearfoss’ car spun into the outside wall in turn one. It appeared that something let go in the rear of the car.

“On that restart he kind of jumped me a little bit and kind of came down trying to squeeze me,” said Dewease of Zearfoss. “Then when we took off, I had a run and he was there and we touched a little bit. I don’t know if that’s why he wrecked our not, but I didn’t try to wreck him. We made a little contact there. I wasn’t letting him back in front of me.”

Normally, once in front, Dewease hunkers it right down on the bottom, but not this time. The Fayetteville, Pa., driver worked through the middle to maintain the lead over a late charging Daryn Pittman. He had conserved enough early to run the car as hard as he had to late.

“We were pretty good on the bottom for how fast the top was, but I didn’t want to run the top yet and overheat the tires that early in the race,” cited Dewease. “I thought I could maintain. I could run the bottom and the middle without killing my tires. We had just a few blisters so I knew we’d be pretty good from there on. I could run it then. We get rolling here in the middle when we get in clean air. I was little worried because I didn’t know which 21 (Brian Montieth or Brian Brown) was second. The top was still there and he (Montieth) can run it better than anybody else. I felt so good through the middle I didn’t think that anyone could get a run at me.”

Montieth nor anyone else had anything for Dewease as he went on to put his No. 69K in victory lane.

“It really meant a lot,” mentioned Dewease of the win. “This is one of the few races I’ve ever had where I was sick to my stomach lining up. The knots were there. I wanted this one so bad.”

Well, I think it’s safe to say everyone wanted it bad for the Posse and Dewease was able to come through to give everyone the ending they were hoping for.