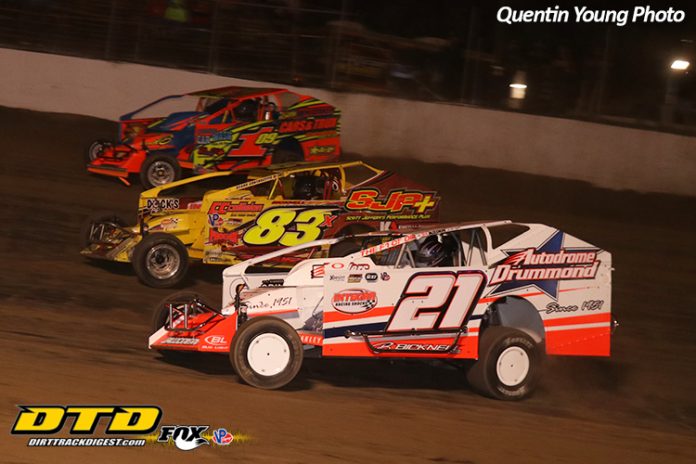 I’m still recovering from the sleep deprivation Outlaw Weekend always induces, but I want to share some of the moments of the weekend I enjoyed. First, the fact that nearly 100 DIRTcar Sportsman showed up Friday to race for 30 qualifying spots is very impressive. Second, the racing both days was phenomenal because the track prep crew worked tirelessly all weekend to give everyone a racy surface.

It turned out to be a good poker weekend for the teams that had an “ace in the hole”. In the first five heats for the Sportsman on Friday night the leaders in several of them checked out on the field.

Heat six was exceptionally fun to watch as a pair of the top women Sportsman drivers qualified for Saturday’s main event by finishing first and second. Jessica Powers took the win to lock herself into the 50 lapper while Amy Holland raced her way into second place to earn her starting spot in the next day’s feature.

The first Modified Heat Saturday saw a pair of LJL Kevlar motors qualify first and second as Pat Ward checked out for most of the race with Tim Sears Jr. racing his way up to second place.

In the third Modified heat a pair of Ray Graham cars finished first and second as Peter Britton won over a hard charging Danny Johnson, who came from 10th to second.

In the fourth heat it was a pair of HBR cars making their way into the big show with Jimmy Phelps and Max McLaughlin qualifying by finishing first and second.

As the sun set and the evening air cooled the competition heated up. The DIRTcar Sportsman Championship Series – Industrial Tire of CNY Sportsman Shootout 50 lap feature paid $2500 to the winner and the drivers all wanted it. At the end Brad Rouse was the recipient of the big paycheck. Dave Marcuccilli finished strongly in second with Shane Pecore, Zach Sobotka, and Brandon Ford rounding out the top five.

The 31st running of the SUNY Canton Outlaw 200 had a bittersweet start as the track honored SUNY Canton’s 20 year long tenure as a major sponsor of the event and the Sportsman division. Michael Perry was instrumental in building that relationship with the track, but announced his retirement from the college this year. He was honored with a plaque for so many years of faithfulness to the track, the sport and he gave the command to the drivers to start their engines.

Robbie Bellinger had a good weekend overall and capped it off by drawing the pole position for the 200. He was able to run his Jeff Hayes owned 358 Modified up front for the entire event finishing a respectable 7th place. Jimmy Phelps won the rodeo in his HBR owned mount. Erick Rudolf, Brett Hearn, Stewart Freisen, and Tim Sears Jr. rounded out the top five finishers.

Another thing I liked about the event was seeing some freshman drivers qualify for the “big dance” in both the Sportsman and the Modified divisions. Jimmy Moyer was one such driver. Friday before the Sportsman driver’s meeting he seemed to lack a little confidence in himself. I reminded him how much he had improved over the regular season and encouraged him to carry that momentum forward. He did that very well Saturday by racing his way to the win in one of the last chance qualifiers that only advanced the winner to the main event.

Glenn Forward and Nick Krause are a pair former Sportsman driver’s that moved up this year. Forward at the beginning of the season, and Krause at the end. Both new 358 drivers qualified, and their smiles just before the driver introductions said more than any words they could have spoken to decribe their experiences.

Overall, the weekend was fantastic. My congratulations to the owners, staff and management of the facility, and all the drivers for putting on a memorable event.

All of the “pairs” that I witnessed over the weekend caught my attention enough to be reminded of something Jesus Christ said. This came at a time when Jesus was addressing offenses and when someone sins against you.

In these statements Jesus was reminding his disciples of the authority that Luke recorded Him giving to believers who followed Him (See Luke 10:19). He also was pointing out the power of unity in prayer. Notice that if a pair of people join their faith together in agreement concerning anything they ask, Jesus is promising it will be done. That’s the power a prayer of agreement releases. It also demonstrates the biblical concept of power in numbers. What is the source of that power that assures us our prayers of agreement get answered? Jesus gave that answer in His next statement.

“For where two or three are gathered together in My name, I am there in the midst of them.”
Matthew 18:18‭-‬20 NKJV”

When people get together to fellowship in the name of Jesus Christ, whether it’s a pair or more of them, He shows up. His presence releases His power as we utilize His authority that Luke 10:19 reveals. As we pray in agreement in His name the authority of His name is also unleashed into the spiritual atmosphere. His name is above every other name so there isn’t a higher authority to appeal to. They key to experiencing His power is to invoke His name upon the things we’re asking for. Also, believing for a manifestation of His presence to accompany the scriptural promises we pray will assure He shows up, just as Mark recorded in his Gospel.

“And they went out and preached everywhere, the Lord working with them and confirming the word through the accompanying signs. Amen.
Mark 16:20 NKJV”

When You want to see God move more powerfully, pair up in Jesus’s Name. Be expectant, season your words with His Word, and watch as Jesus Christ shows up and shows off in ways that only He can receive the glory for.

We’ll be at Super Dirt Week for every event, and we’ll be holding our Racer’s Chapel on Sunday morning for everyone. Please pray for the weather this week. I’ll begin my march through the week at Utica Rome tomorrow night, and Pastor Ed will be arriving on the scene so we can pair up to intercede for and encourage you to seek the Lord. We can help you experience His goodness. You can reach us on Facebook at Finish Line Chaplain, or by email at flchaplain@windstream.net