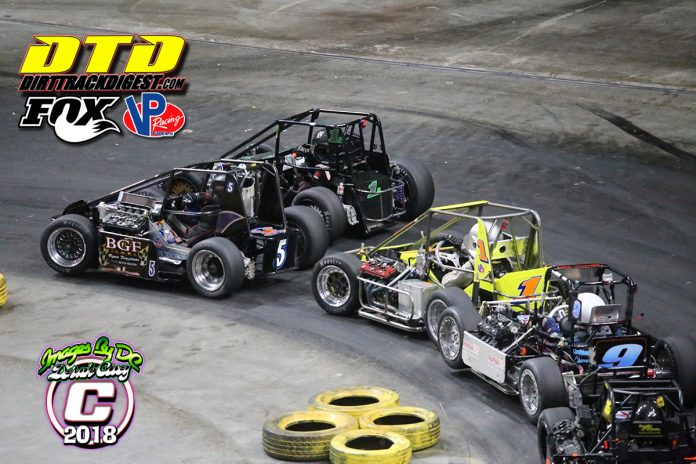 SYRACUSE, NY – The Indoor Auto Racing Series fueled by VP Racing Fuels will make its debut at The New York State Fairgrounds Exposition Center in Syracuse, NY on Friday, March 8 and Saturday, March 9, 2019. The Syracuse program will include two complete programs with qualifying and feature events for the Three Quarter (TQ) Midgets, Slingshots and Champ Karts both on Friday and Saturday nights.

The first ever event in Central, N.Y. will be the third and final leg of the 2019 Indoor series. Following annual races inside Allentown Pa.’s PPL Center (January 4, 5) and Atlantic City, N.J.’s famous Boardwalk Hall (January 25, 26), the teams will head to Syracuse where the champions will be decided in all three divisions after two hard fought nights of racing on the building’s concrete floor.

The New York State Fairgrounds Expo Center opened during the recent Labor Day Fair. The huge state of the art $33 million project was built without obstructing poles. Grandstand seating will be available on both the front and backstretch. From their seats, fans will able to be able to see the entire speedway plus the pit area which will be located on the far side of the building.

“This is a great opportunity for fans in the area to again see exciting Indoor Auto Racing during the off-season,” series and event promoter Len Sammons said.

The headline TQ Midgets annually competed inside the Niagara Falls Convention Center from 1984 through 2002 when the building was made into a casino. The Indoor Auto Racing Series made its debut in New York last year with an event held inside Albany’s Times Union Center, but an acceptable date could not be arranged. The Syracuse venue will be the sixth different location for a Len Sammons promoted Indoor Auto Racing Series event.

“The Syracuse location is the perfect building in just the right spot for our series,” said Sammons. “Many of the teams that competed in Niagara Falls back in the day, now have an event closer to their home. The events were also very popular with the fans so a big crowd is expected.”

Two big TQ Midget winners on the Indoor Series, Erick Rudolph of Ransomville and Andy Jankowiak of Buffalo, will surely be fan favorites at the Syracuse show.

Rudolph, currently second in the Super DIRTcar Series point standings, has already clinched the 2018 Modified champion of the nearby Canandaigua Speedway. The Ransomville driver, a multi-time Indoor race and Series champion, should be the fan choice among dirt fans.

Over 100 drivers from eight states and two Canadian providences are expected to compete. Other top TQ Midget drivers in the Series hailing from the Empire State include Ryan Bartlett of Watertown, Scott Kreutter of Buffalo, the Catalano brothers, Tommy and Timmy from Ontario, Oswego Speedway 2018 Supermodified Rookie of the Year Tyler Thompson from Fulton, DJ Forbes, Jr. from Syracuse, Jonathan Reid from Lockport, Mike Maresca of Hannawa Falls, and the Nye brothers, Shawn and Andrew, from Lancaster.