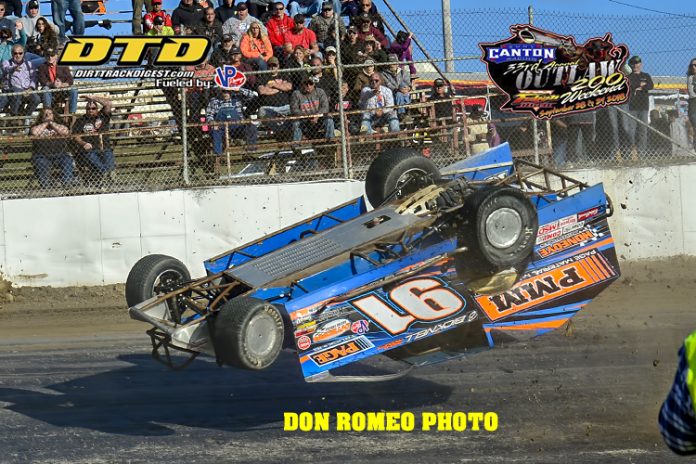 The Fulton Speedway went small-block racing in 2018, but Jimmy Phelps took his big-block program and went to the Land of Legends on Saturday night.

This past Saturday evening the ever-consistent “B’ville Bandit” returned to the track he grew up at, took the lead at 125 and was never headed to capture his third Outlaw 200 as he was never challenged by runner up Erick Rudolph or third place Brett Hearn.

The Outlaw is like any major sports event. The hype is huge, expectations are high and like the Super Bowl, World Series, Indy 500 or any NASCAR race it can be talked about forever for the excitement and tremendous event or you can simply watch, go home and forget about it.

This year’s 200 fell somewhere in between as the track locked down in the 50 lap Sportsman event and with yellow fever clicking off three laps at a time over and over in the first 100 track management figured it had to do something. So, at the century point, yuke tires got moved and equipment was sent out to work on the track for nearly an hour.
When the field returned there were many more opportunities to get out of line, but in the end, it was a run away.

Certainly, there were some drives to remember as Stewart Friesen passed 358 rookie Nick Krause with two laps to go in the last chance race to earn the 39th starting spot. He came home with a very respectable fourth place finish.

Tim Sears Jr. was fifth and sort of had an up and down day as he won the first heat of the day giving him the first pick in the draw, but he picked 11 and was never a factor.

“What if” was a phrase that could have been used on couple of drivers as Mat Williamson took the lead on lap six and he was gone until something in the drive line went on the 71st lap.

The Doctor (Danny Johnson) took over and it appeared he might be bound for glory, but around 121 someone said he might have touched the front stretch wall. He was out of contention in the Ray Graham machine.

Rudolph took over, but it wasn’t for long as Phelps made the pass and the rest is history.

Larry Wight put on a show as a right front flat put him to the pits on the 30th lap. On the ensuing restart, he went upstairs where no one else dared and went from 44th to 27th in just over a lap. He exited the race on lap 56 when his front end came to rest atop the left rear of Billy Dunns’ 3RS.

Todd Root put on a show in the middle stages as he used the high road to make numerous passes. He faltered last but was solidly in the top seven at times and ended up ninth.

A tangle between Roy Bresnahan, Mario Clair and Chris Hile brought out the red. It wasn’t due to damage, but Roy came to rest in turn four while the left rear end destroyed car of Clair sat in three. Roy must have thought Mario was to blame, sprinted several yards and went into the cockpit. Suffice to say the 02 was done for the night.

Max McLaughlin was biding his time but got collected in a tangle with Danny Varin and Tyler Meek early on. Max settled for sixth.

Seventh place Robbie Bellinger had the “small small block” running well and he along with Kyle Coffey started on the front row.

Alan Johnson and Billy Decker got the 43rd and 44th starting spots as past Outlaw (or Victoria) champions.

Decker, in his heat, had contact between himself and Scott Boudinot resulting in the 91 flipping between turns three and four.

As always, some surprises as rookie Jack Lehner got a provisional and came home 18th while Garrett Rushlow brought a Mod to Fulton for the first time, started 38th and finished 20th.

Joe Shields was fourth quick in hot laps and qualified for his first 200.

Michael Parent was a surprise, but a late race crash saw him go off on the hook.

Nate Higgins made his Mod debut and though not qualifying sure gave it a good solid effort.

Chris Hile started 10th in his heat and drove to third to get in.

Rudolph went ninth to second in his prelim.

Danny Varin started 11th and got to fifth to qualify. He got Bresnahan right at the line for get in.

Billy Whittaker switched from big-block on Friday to small-block on Saturday and won a consi.

Other last chance winners were Todd Root and Bresnahan.

Hard Charger and a drum of VP Racing Fuel to Friesen from 39th to 4th.

There were 65 Mods pit side.

SUNY Canton partnership of many, many years came to an end as Laura Wight presented thank you plaques to Mike Perry and Brenda Winters.

Well, now it is on to SDW and everything that is involved with it.

Comments, gossip or anything else send along to foley395@hotmail.com