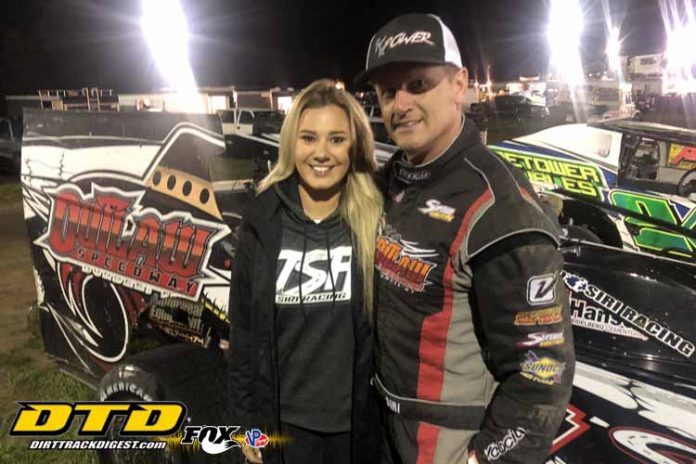 It’s hard to believe it’s October and time to head to Oswego for Super DIRT Week 47, a trip we will be making for the third time. Oswego Speedway, a very welcoming venue and the community of Oswego is also very receptive to the dirt fans that converge on the community this week. The first year DIRTcar did everything that could be done to give the competitors a racing surface that would hold up for the entire multi-day event. The weather in the area, before the event, did not make all of this very easy. For the first time a dirt track had to be put down over the famous asphalt oval, campgrounds and roads were created. With all the effort, everyone made it through the Super Dirt Week 45 at a new venue, on and new surface after 44 years at the New York State Fairgrounds.

Last year we returned to Oswego for the second attempt, Super Dirt Week 46. With lessons learned from the first there was much improvement, with the racing and everything on the race track and grounds. Many fans have now accepted that the mile at the New York State Fairgrounds in Syracuse is gone and have decided that this may not be so bad after all.
Over the past few years we have spent much time talking with DIRTcar CEO, Brian Carter and have learned that he has a desire to bring the best show he can to town. Brian is part of Super Dirt Week now. We’ve sat on the backstretch with him and he watches all the aspects of the program and is always available to talk. As we look toward our trip this week we decided to look at some of the drivers and their SDW records. These are the top six drivers by the number of events they competed in. Although he no longer competes, Jack Johnson of Duanesburg, N.Y., raced in 35 of the 46 events and has the distinction of being the first New Yorker to win in 1979 he repeated in 1984. Jumpin Jack has since been sidelined with health issues. Jack has eight top fives, and 14 top tens.

Danny Johnson “The Doctor” has also competed in 35 Super Dirt Week events and has two Super Dirt Week wins 1997 and 2006; has seven top fives and 14 top tens. Danny and Jack Johnson also have one other thing in common; they both traveled to the Nazareth National one mile oval in Pennsylvania in 1983 for an event that ran against Super Dirt Week that year and set the racing world on its ear.

Saturday was our first trip down the NYS Thruway to Gary and Donna Palmer’s 1/4 mile oval the Accord Speedway in quite some time and we had never been to the King of the Catskills event. One of the most important things at any track, the concession area. At Accord this area is overseen by Donna Palmer making sure all the fans get some great food. On Saturday the concession was manned by Michael, Gloria and Larysa, there to make sure everyone’s food orders were filled in a timely manner and to take care of any needs of the many fans that were there for the race. And always with a smile on their faces. Great food, fast service and pleasant atmosphere keys to any track’s concession area. Next we made our way to the pits area where we noticed a familiar looking car in the first Modified heat. A car we remember from days gone by and as the cars were announced coming out of the pits we learned it was driven by Billy Osmun, III, grandson of Billy Osman. On this day the 21-year-old was behind the wheel of a Modified for the first time and it just happened to be and No. 81 with a gold and black paint scheme with a stallion on the rear quarter panel. Young Billy says he has been competing in the Sportsman division and decided to try his hand at a Modified. His first time out and he won his heat. The owner of the car also had a familiar name, Andrea Norcia whose father was one of the original owners of the famous No. 81 driven by Billy Osmun winner of the third Super Dirt Week in 1974. Andrea said as a young girl she attended races with her dad, traveling all over the racing circuit with many different drivers. She stepped away for a time and decided to return as a car owner and is really enjoying herself.

One other stop we made was at the Five Star of Tyler Siri. We got to see Tyler’s early season win at Volusia Speedway in Florida in February and we think Tyler was still smiling about that win. He said, “that is a tough place and that win was special”. Tyler is also the promoter at Outlaw Speedway, formerly Dundee and is steadily bringing the former track back to life. The cover photo is of Tyler and manager of Outlaw Speedway, Jordan Lynch.

Last week we said we would wait and see what happened at Fonda, well by Monday, September 24th we saw along with everyone else. Brett Deyo of BD Motorsports Media LLC will take the reigns at Fonda for the 2019 season plus. The press release is on the front page of DTD and contains all anyone would need to know. We’ve known Brett for many years and wish him the best. It’s a great time to bring back the Fall 200, it was one of the most popular events at the track for years and years.