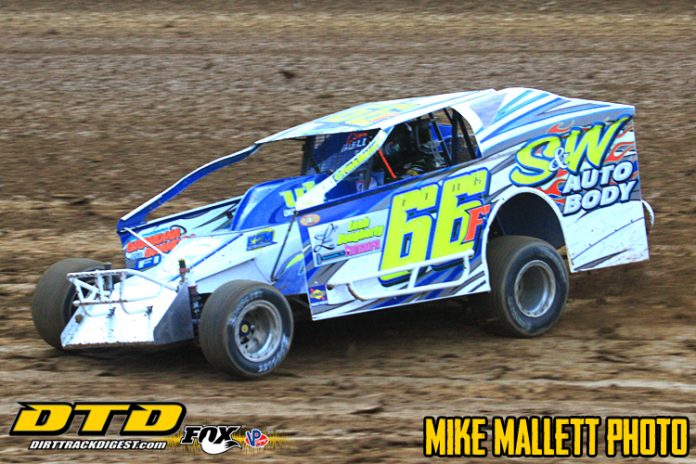 MERCER, PA – A late afternoon shower delayed the start of the 19th Annual Little Guys Nationals at Raceway Park by more than two hours. But promoter Eric Williams and his staff got the track prepared for an exciting night of racing. Taking the honors in the 358 Modified Tour feature was Kyle Fink. Tim Bish led wire to wire for the Penn Ohio Pro Stock main event.

Kyle Fink and Lonnie Riggs paced the 358 Modified Tour feature. Riggs got the jump on the start, but a three car tangle on the front stretch negated his advantage. Fink was better prepared for the second attempt to start the race and he led into turn one. Riggs was hot on his heels, followed by Jeff Schaffer, Sr., Steve Schumacher, and Steve Barr.

A caution on lap four bunched he field up again. Fink resumed control when the green light flashed on, with Riggs in second and Schaffer, Sr. in third. That lasted but two laps, as Riggs’ mount slowed coming off turn two. He was finished for the night.

On the restart, Schaffer, Sr. powered off turn four to take the lead. Fink ducked in behind him entering the first turn, with Tom Glenn moving into third. Steve Barr raced in fourth, and Schumacher in fifth.

The race was slowed again on lap eight for the spin by Jeremiah Shingledecker. Kyle Fink grabbed the lead on the restart, Schaffer, Glenn, and Barr followed. Glenn slowed just a few laps later, surrendering the third position. That moved Phil Vigneri into contention.

The final caution came out on lap 18, wiping out a comfortable lead for Fink. That set up a two-lap dash for the $1,000 pay-off. Fink was up to the task, as he led the final rounds. Schaffer crossed in second. Phil Vigneri was third, Steve Barr fourth, and Jimmy Holden in fifth. Positions six through ten went to Schumacher, Greg Martin, Tom Holden, Rick Regalski, and Andy Jankowiak.

The heat winners were Fink, Tom Holden, and Robbie Kristyak. There was no B Main, as all cars that were able started the A Main.

Although Tim Bish maintained control throughout the contest, he could never break away from Whitling. There was but one caution in the event, but Whitling could not capitalize on his front row position for the restart.

Bish and Whitling distanced themselves from the rest of the racers in the remaining laps. Dellinger and Davis fought hard for the third position, with Dellinger prevailing. Tyler Thompson was fifth. William Hurrelbrink was sixth, followed by Leigh
Wheeler, Mike Miller, Andy Thompson, and Gary Luzier.

Tim Bish, Hurrelbrink, Mike Miller, and Davis were the winners of the heat races. Curtis Bish and Hunter Exley topped the B Mains.

Samuel Darby surged ahead of the polesitter, Nathaniel Bale, as they raced down the front stretch after taking the green. Darby would never be headed. Taking second was Tyler Allison, who started in fourth. Third went to Travis Crothers, followed by Evan Darby, and Luke Mulichak. Bale, Wesley Boor, Randy White, Jackson Billyk, and Jarren Dye completed the top ten.

The heat winner was Samuel Darby.

Like Darby, Jim Young blasted into the lead at the start of the 600 Micro feature. Jeff Weaver moved into second from his fourth place starting spot. Jon Adams was in third. Young went on to victory, followed across the line by Weaver, Garrett Bard, Adams, and Tom Morrell, Jr. A.J. Bast sixth, with Shon Derr, Ryan Fredericks, Jo Marie Gagne, and Jacob Eastman completing the top ten. The preliminary for the 600 Micros went to Morrell.

Josh Ferry put his prime starting spot to good use, taking the lead from the start of the Econo Modified feature. The race was shortened to 18 laps due to the curfew, and Ferry led them all. Gary Miller worked his way up to second and was named the hard charger of the race. Keith Felicity overcame an early miscue to take third. Brandon Blackshear was fourth.
Fifth went to Percy McDonald. George Vestal, Ray Gregory, Mark Titus, Trenton Harper, and Gary Robinson held down positions six through ten. Ferry and Miller were victorious in their heat races.

Ryan Fredericks led wire to wire in the 270 Micro feature. Brian Borawiec Jr. chased him most of the way but his best opportunity for the pass was negated by a caution. Brandon Fredericks, Austin Pasquarella, and Ryan Beatty completed the top five. Steve Haefke, Jr., Jeff Haefke, Jeff Weaver, Noah Wirginis, and C.J. Davis were in sixth through tenth. Jeff Haefke, Todd Reusser, and Sean McAndrews had heat wins. There was no B Main, as all cars started the race.

Jerry Schaffer led Shane Izzo into turn one at the start of the RUSH Modified race and that was the way that they finished it. It was the first RUSH Modified win for Schaffer, an ardent supporter of the Crate racing concept. Rob Kristyak, David Kalb, Jr., and Brian Schaffer rounded out the top five. Rocky Kugel, Blaze Myers, Todd Gabriel, Steve Slater, and Greg Porter were the next five finishers. Blaze Myers, Garrett Krummert, and Chas Wolbert had heat wins. There was no B Main.

Alan Knepper drove by early leader Brent Begolo on lap four and led the remainder of the Modified Lite race. Alan Dellinger finished in second, and Zackary Kimbrew in third. Jacob Bova rode home in fourth and Begolo holding on for fifth. Shane Webb led the next group of cars to the checkers. Chris Logan, Teddy Williams, R.J. Pietz, and Logan Lewis followed. The heat wins went to Begolo, Shane Pfeuffer, and Knepper. There was no B Main.

The Dwarf cars turned out in force for this event, so they were separated from their high powered brethren for racing on their own. Jacob Eakin came away with the victory. Steve Mix, Jr. led the first three rounds, and finished second. Chas Wolbert was third, with Steve Mix, Sr., and Ted Williams completing the top five. Positions six through ten went to Jordan Simmons, Mark Beveridge, Amelia Clay, Tiffany Williams, and Mike Heverly. The preliminaries went to Ted Williams and Eakin. There was no B Main.

The final feature was for the Mini Stocks. Shane Shook returned to victory lane, taking command just a couple of laps from the finish. Mike Porterfield, who led from the start, was second. Third belonged to Patrick Crawford. Patrick Miller and Tim Callahan were fourth and fifth. Jason Pavlik, Kyle Donnelly, Patrick Crawford, Jr., Jim Buchanan, and Dave Phillips completed the top ten. Dillon Speer, Patrick Crawford, and Porterfield took the checkers in their heat races. There was no B Main.