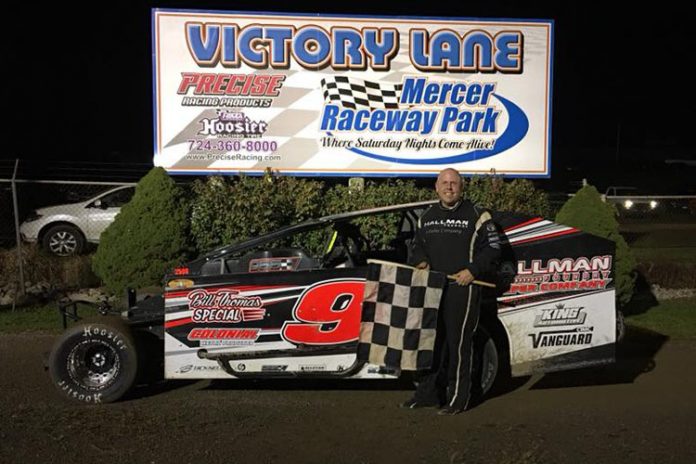 MERCER, PA – Day two of the 19th Annual Little Guys Nationals at Mercer Raceway Park featured Chamber of Commerce weather. The racing action was intense, as many racers were putting the last laps of the season on their machines. Will Thomas lost the lead twice in the 358 Modified Tour feature, but rallied for his first career win at the track. In the Open Stock Car feature, Tim Bish led the entire way of the caution plagued event to complete the weekend double.

Garrett Krummert took the lead on an early restart and led the remainder of the RUSH Modified feature. Alan Knepper picked up where he left off the night before, leading the entire distance in the Modified Lite race. Also getting wins on the final night of the season were Nathaniel Bale (Junior Sprints), Garrett Bard (600 Micros), Patrick Crawford (Mini Stocks), and Brian Borawiec (270 Micros). The Econo Modified feature was lost to a downpour with one lap in the books, so the purse was divided evenly among the starters.

Versatile Will Thomas parlayed his pole position into an early lead in the finale for the 358 Modified Tour. Thomas has had experience driving several different types of cars on dirt and paved surfaces, but has probably made the fewest starts in a conventional Modified. His lack of experience in the class did not show, however. Following Thomas in the early going were Tom Glenn and Lonny Riggs.

Eric Gabany made two dazzling restarts, both using the high side of turns one and two. On the first occasion, he blasted into the top five. Just a few laps later, he repeated the maneuver to bolt into the lead! Gabany’s time out front was limited, though. Just six laps into his run, the car came off of turn two slowly and Gabany coasted down the back stretch to the pits.

Gabany’s misfortune gave the lead back to Thomas, with Riggs lurking in second, and Kyle Fink, the winner on opening night of the Little Guys Nationals, in third. Two laps later, there was a caution for a four-car tangle inturn four. In the melee, Jeff Schaffer got airborne, but his car landed safely on its wheels and he was able to return at the tail of the field.

On the ensuing restart, Riggs pressed Thomas for the lead. He was finally able to power by him on lap 18. Riggs held control for but five laps. He made a rare mistake, though, allowing both Thomas and Fink to get around him. And that was the way they ran the final three laps.

Riggs, Thomas, Phil Vigneri, and Greg Martin were tops in their respective qualifiers. There was no B Main.

Tim Bish immediately took control of the Open Stock Car feature, with Brian Carothers in tow. But the man on the move early was Rusty Moore, substituting for Steve Allison this night. Moore navigated the unfamiliar car from sixth to second in just two laps.

While Moore was always within striking distance of the leader, he could never find a way to get by. Hunter Exley advanced from tenth to third in this go. Brent Johnson brought his battle-scarred car home in fourth, with his close friend, Bill Hurrelbrink, in fifth. Bobby Heim was sixth. Seventh went to Patrick Fielding in the former Rusty Moore mount. Andy Thompson, Jacob Billyk, and Zack Gustafson rounded out the top ten.

Triumphs in the heats went to Carothers, Hurrelbrink, Tim Bish, and Garrett Calvert. The B
Main winner was Joe Stajrajh.

The RUSH Modified feature had Rob Kristyak and Khole Holden on the front row, with Jason Hufnagel and Brian Schaffer in row two. Holden led the first lap, with Kristyak taking over for lap two. Meanwhile Garrett Krummert charged up to second from his sixth starting spot and was in a perfect position to take command when racing resumed on lap three. Kristyak settled into second, with Schaffer holding down third.

Krummert and Kristyak seemed to have their cars on cruise control for the rest of the contest. Behind them, however, Blaze Myers worked his way into third. Brian Schaffer and Brandon Ritchey completed the top five. David Kalb, Jr., Steve Slater, Jordan Ehrenberg, Jeremy Weaver, and Josh Deems completed the top five.

Heat winners were Brian Schaffer and Krummert. There was no B Main.

Alan Knepper surged into the lead from the third starting position and led wire to wire in the Modified Lites. The Somerset driver was perfect on the weekend, snaring both heat races and both features against some stout competition. Doug Jones, a former track champion, was second. R.J. Pietz, Brent Bogolo, and Bobby Springer made the top five. Shane Webb, Jacob Eakin, Dusty Frantz, Sean Iftedy, and Jason Darocha held positions six through ten.
Preliminaries went to Knepper, Begolo, and Webb. There was no B Main.

Patrick Crawford crossed the finish line in second, but he won the Mini Stock race in tech. The apparent winner, Wes Staley, was disqualified because his engine was not compatible with the chassis of his car. Tim Callahan was moved up to second, with Wayne Newbury, Jason Pavlick, and Justin Baily being the other finishers. Cory Price, Shane Shook, Bill Fuchs, Travis Crawford, and Jim Buchanan were assigned positions six through ten based upon the laps that they completed. Callahan and Patrick Crawford got the nods in their respective heats. There was no B Main.

Brian Borawiec passed Brandon Fredericks on lap six and never looked back in the feature for the 270 Micros. The event was marred by several crashes, but none of the competitors were injured. Young Chase Matheny, a graduate of the Junior Sprint class when it raced regularly at the track, was second. Third went to Brandon Fredericks. Tim Eakin and Ryan Fredericks were fourth and fifth. Sixth through tenth went to Allen Wrench, Todd Reusser, James Conner, Steve Haefke, Jr., and Lonnie McChonay. Ryan Beatty, Eakin, and Borawiec snagged the heats. There was no B Main.

The Econo Modified feature was called after one lap due to rain. There was a major pile-up coming off turn four on the initial lap. Just as the wreckage was cleared, rain started to fall. The rain became more intense, leaving officials no choice but to call the race. The purse was divided evenly among all entrants. Heat wins were logged by Josh Ferry and Gary Miller.