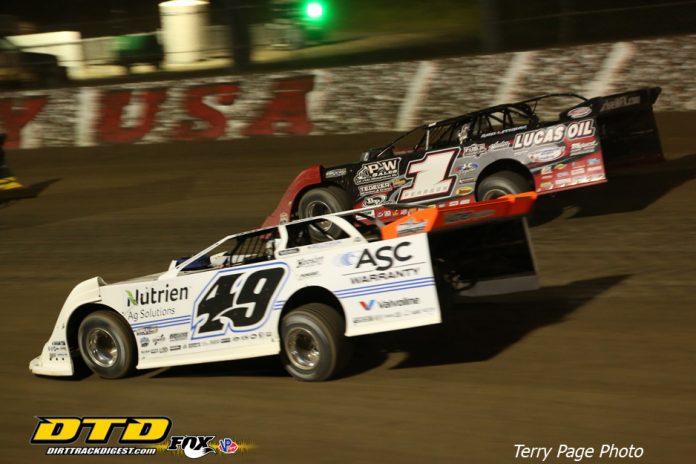 The combination of Eldora’s biggest event – the World 100 – and historically one of its most popular racing divisions – the World of Outlaws Sprint Cars – have many referring to the happenstance blockbuster as ‘The Best of Both Worlds.’

The full racing program for Dirt Late Models on Friday, October 12, featuring Twin 25-lap feature races paying $10,000 to the winner, will see the pit gates open at 11 a.m. and grandstand gates open at 12 noon. Competitors will first hit the track for hot laps at 6 p.m. with racing at 8 p.m.

The World 100, being held in October for the seventh time in its 48-year history – four of which are weather-related, will open all gates at 12 noon on Saturday, October 13. All drivers will participate in the autograph session at 3:30 p.m. in the Fan Zone and the process of advancement and elimination via the famous six heat races will begin at 7 p.m.

The 65th Season Finale, on Sunday, October 14 and headlined by the World of Outlaws Sprint Cars, remains unaffected as it was originally scheduled to be a late Sunday afternoon affair in throwback fashion. All gates will open at 1 p.m. with hot laps and qualifying beginning at 4:30 p.m. Racing is scheduled for 6 p.m. The championship event for the top-24 in Eldora’s DIRTcar UMP Modified division is also on the card as an invitational only affair.

Tickets for all three nights, including the few remaining reserved campsites added to Lot 5, are available online now at www.EldoraSpeedway.com, by calling (937) 338-3815 or at the Eldora box office. Event information, Frequently Asked Questions, time schedules and more can be found both online and via the Eldora social channels.

About Eldora Speedway:
Since carved from a cornfield in the natural amphitheater that existed between the Eldora Ballroom and the Wabash River by bandleader Earl Baltes in 1954, Eldora Speedway has grown to be a frontrunner in motorsports growth and stability. Baltes chose to sell the legendary high-banked clay oval to motorsports entrepreneur and NASCAR, IndyCar and USAC champion Tony Stewart in 2004. Eldora is celebrating its 65th consecutive season of racing in 2018 featuring the biggest events in short-track racing, including: the $100,000-to-win Dirt Late Model Dream Weekend; the $50,000-to-win Kings Royal Weekend; the Camping World Truck Series’ Eldora Dirt Derby – NASCAR’s only National Series event on dirt; the historic 4-Crown Nationals; and the 48th Annual World 100 Weekend re-scheduled for October 12th and 13th.. The complete schedule for Eldora’s 2018 season, including ticket and campsite information, is available at www.EldoraSpeedway.com. Fans can get behind-the-scenes access by following @EldoraSpeedway on social media channels Twitter, Facebook, Instagram and Snapchat. Exclusive video content posted on www.youtube.com/EldoraSpeedway has been viewed over 4.2-million times.