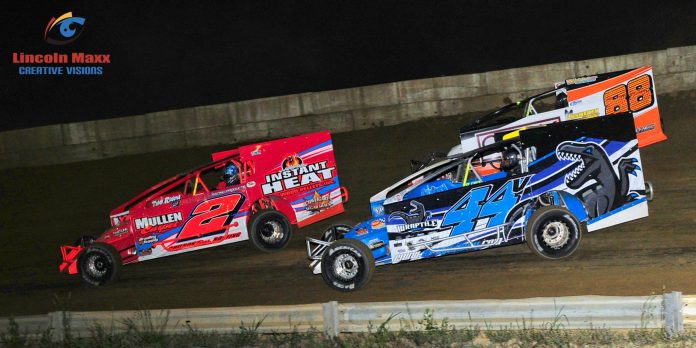 BATAVIA, NY – The final event of 2018 at the Genesee Speedway is perhaps the most highly-anticipated event of the season, and it continues to get bigger.

This Saturday, October 13, the Genesee Speedway’s final race will be the A-Verdi Fall Finale. This late-season addition to the schedule has always been a bonus-paying event for four weekly Genesee divisions, but when the Modifieds were added to the card after “The Gladiator” was rained out in August, this afternoon show went to a new level.

“The Gladiator” is a 40-lap event for Big Block and Small Block drivers competing on common ground for the $2,000 top prize. When the event was originally attempted back in August, a slew of elite drivers and teams invaded Batavia, many of whom claimed track championships this year. A strong contingent is expected to return this Saturday. The race is presented by Wraptile Graphics and Professional Drainage Systems, who have worked hard to build this event in to a must-see.

The other big news for the A-Verdi Fall Finale is that the street stocks, who are running for $1,000, have a new added bonus has been created for area champions. Cummings Trucking has put up sponsorship for the Race of Champions Dash. Dennis Cummings was the 2018 Yasses Trucking and Construction Champion at Genesee, and is calling out champs such as Bill Taylor (Freedom), Adam Depuy (Land of Legends), Glenn Whritenour (Outlaw), Dennis Harrison (McKean) and Dylan Cecce (Woodhull) to be amongst those that can join. This will be a $500, winner-take-all 10-lap race where they will draw for position. Doug Jones will not run the dash, but swept Topless Crate Nationals weekend and will attempt to end the season on a crazy hot streak.

The Sportsman and Rush Late Models will also run for $1,000 on Saturday and should feature stout car counts. Sportsman Track Champion Kyle Inman won the Sunday Night portion of the Topless Crate Nationals last month and will look to continue to protect home turf to complete the season. Jason Genco has dominated Late Model action in Batavia this year, winning the last four races he has run at the 1/3-mile. Will Track Champion JJ Mazur or anyone else have an answer this weekend?

Also on the card this weekend are the Mini Stocks, running for a $300 top prize. Brad Shepard and Dante Mancuso scored the wins on Saturday and Sunday Night of the Topless Nationals, respectively and are sure to be a factor once again.

A-Verdi Storage Containers, will be the presenting sponsor of the event. This is the first engagement for the Savannah, NY-based company at Genesee, a long-time supporter of dirt racing across New York State. With locations across the state, they have the experience to service you. For more information, visit www.Genesee-Speedway.com. Racing action will get underway at 3:00 pm on Saturday. Pit Gates will swing open at 1:00 with Grandstands at 2:00 P.M. For more information, visit www.Genesee-Speedway.com.