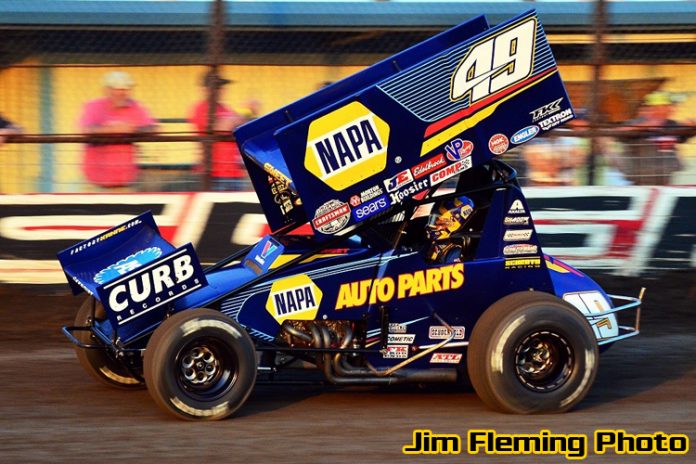 TERRE HAUTE, IN – Brad Sweet’s added another page to his unforgettable 2018 season with a flag-to-flag victory at the historic Terre Haute Action Track, his ninth World of Outlaws Craftsman Sprint Car Series victory of the year. Donny Schatz charged from 12th to second, getting by Tim Shaffer, who completed the podium, on the Green-White-Checkered finish.

Brad Sweet and Kasey Kahne Racing teammate Daryn Pittman put on a show on the final lap of the Sears Craftsman Dash finishing side-by-side. Sweet edged Pittman by 0.054 to earn the pole for the 30-Lap Feature.

Sweet powered to the lead on the initial start to lead the opening circuit and reached lapped traffic on Lap 9 at the spacious Indiana half-mile. Pittman and 2001 Terre Haute Outlaw winner Tim Shaffer were in tow.

At the halfway point, Donny Schatz had worked forward from his 12th-starting spot to sixth aboard the Tony Stewart Racing/Curb-Agajanian No.15. By lap 19, the nine-time Series Champion and current points leader had maneuvered to fourth.

Sweet continued to work his way through traffic as Schatz closed the gap on Pittman and Shaffer for the runner-up position.

Lap 27 saw Shaffer and Schatz get by Pittman for position down the backstretch and through turn three, respectively.

As the White Flag flew for Brad Sweet, he would not be caught, as he had multiple lapped cars between himself and Shaffer and Schatz, who were in a torrid battle for second.

It wouldn’t be that easy for the driver known as ‘The Big Cat’, however, as the caution flew for a stopped Ian Madsen as Sweet was about to take the Checkered.

The caution set up a single-file, Green, White, Checkered finish with Shaffer, who was ahead of Schatz at the last completed lap, in second and Schatz in third.

On the restart, Schatz quickly disposed of Shaffer in turn one and set his eyes on Sweet for his 20th victory of the season. Schatz closed the gap in each corner, but it wasn’t enough, as Sweet went on to win by .686 seconds.

When asked about the late restart, Brad Sweet chuckled and said with a smile, “Well, I’ve been getting used to it. Knoxville, Black Hills, Chico and Lernerville have all had late race restarts and sometimes it’s not bad to get a clean track. I think we were just good enough to hold these guys off tonight.”

“Lapped traffic was tricky. I think I made a few mistakes, but I guess I had a big enough lead,” Sweet said of the long Green Flag period to open the race, before thanking his NAPA Auto Parts crew for their continued hard work.

“Terre Haute is a special place. I’ve won a non-wing USAC race here, so it’s cool to come back here and win with the World of Outlaws,” the Grass Valley, CA native added.

Donny Schatz, who had passed Tim Shaffer for second on the final lap but had to go back to third for the Green-White-Checkered finish, was obviously disappointed to come up just short.

“We did what we could, the car was obviously rolling to get up there on an open race track. My guys did an incredible job, we wanted to get a win,” Schatz, who earned KSE Hard Charger honors for his efforts, said.

Tim Shaffer’s excellent 2018 season continued with a podium finish and he was pleased, “We had a great car, it kept coming in little by little as the race went on.”

Pittman settled for fourth with Sheldon Haudenschild charging from 15th to complete the top-five.

A week of rain and frigid temperatures had Terre Haute Action Track in unchartered territory during Qualifying, as 19 of the 32 cars signed in broke the existing track record set back in 1999. Brian Brown, who went out late, ended up establishing the new Terre Haute track record at 16.028, nearly a half-second faster than the existing record.

The World of Outlaws Craftsman Sprint Car Series continues its 40th Anniversary Season tomorrow evening at Eldora Speedway with an early start time. Drivers Meeting is scheduled for 3:30pm, tickets for the The Greatest Show on Dirt’s final appearance of the year at ‘The Big E’ can be found here. As always, if you can’t make it to the track, watch every lap LIVE on DIRTVision.com!