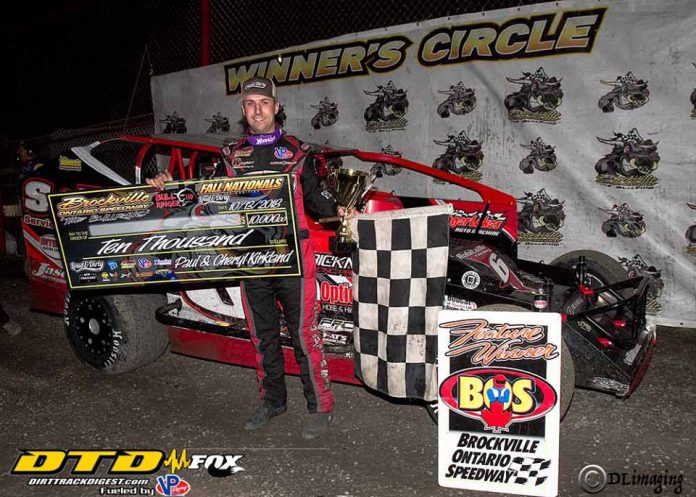 BROCKVILLE, ON – Mat Williamson made his right rear tire last 110 laps to win the DIRTcar 358 Modified Tour finale at Brockville Ontario Speedway. Erick Rudolph lead most of the Bullringer 110 until with only five laps to go, his right rear tire gave up under caution. Williamson inherited the lead and brought the no. 6 to Victory Lane. Tim Fuller benefited from a last-lap flat tire on Steve Bernard’s no. 54 and managed to pick up a second-place finish, while Larry Wight preserved his tires long enough to come in third. Wight also won the DIRTcar 358 Modified Championship with the podium finish.

The hardy race fans that packed the Brockville Ontario Speedway grandstands were shocked to see leader and Championship contender Erick Rudolph pull into the pit area under caution with only 5 laps to go. Mat Williamson noted, “Erick had a better car. I knew his tire was gone and I figured mine wasn’t far behind it. Being in second you can look at the leader’s tire and he couldn’t look at anybody’s, so it’s kind of a disadvantage. It played out in our favor tonight. Towards the end I knew I couldn’t get off the bottom. I had to keep the tires under it. We’ve never really been good at that, so tonight to win this one is pretty cool.”

The track took rubber about halfway through the race and the veteran drivers knew immediately that they had to take care of their tires. “The tire maybe had one or two laps left. You can feel it. It’s nice to be sitting here in Victory Lane. This is awesome,” said Williamson. “We’ve always had bad luck here. These rubber down race tracks haven’t really been in our favor.” Lady luck blessed the no.6’s right rear and it lasted the entire 110 laps to carry him to victory.

Tim Fuller could see how the race was playing out and drove the race car accordingly. “As it locked down with rubber, I knew it was going to come down to tire management. Then I started thinking about being light at the scales because we lost rubber. All in all it was good. Congratulations to Mat Williamson. They’ve had a couple of heartbreakers, so it’s good that they got one,” Fuller said with a smile.

Incredibly Larry Wight was mired back in 8th position late in the running. The DIRTcar 358 Modified Championship was still up in the air in the closing laps. Rudolph’s misfortune just about sealed it but Wight still had to maintain the lead over teammate Pat Ward, who sat second in points coming into the event.

All smiles Wight said, “We weren’t really planning on chasing it but we had good enough finishes to put ourselves in position and everything worked out. We were able to save the tire long enough. The last 80 laps, we just rode, and I could see everyone’s tires in front of me and I knew that a handful of guys weren’t going to make it. I had to make sure we did.”