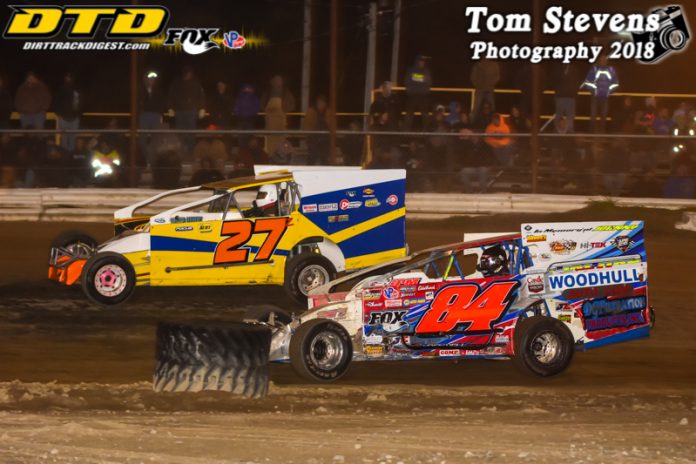 BATAVIA, NY – Mother Nature rained on the Modified return to Genesee Speedway back in August forcing the postponement of the program.  Saturday, albeit cooler than the original date, the Modifieds finally got to hit the one-third mile oval.  When all was said and done it was Ryan Susice copping the win in the Gladiator 40-lap feature.

“After the heat races I wasn’t really sure what we had for these guys,” cited Susice in Victory Lane.  “There are a lot of good guys here and we were a little off, but we really got it for this feature.”

Todd Gordon jumped to the lead at the start by driving around the outside of pole starter Joe August Jr., in turns one and two for the number one position.  Gordon led the way when the first stoppage came on lap two. Jim Zimmerman rolled several times in turn one. Luckily he walked away unharmed.

Gordon was strong at the green resuming the race lead. At this point the race for second picked up as Greg Martin used a three-wide pass on the backstretch to go from fourth to the runner-up spot behind Gordon.  He went by Boyd MacTavish and August.

A second caution came on lap six as multiple cars tangled in turn four. James Sweeting and Shannon Whaley got the worst of it with both drivers suffering extensive damage and needing the hook to return to the pit area.

Another yellow was necessary a lap later, but not before Susice was able to get around MacTavish for the runner-up spot in the runner order. Gordon continued to lead the way.

Gordon got a solid restart with Susice hanging with him. Susice challenged him on the outside looking for a way by on the top.  Susice hounded Gordon for the lead before pulling the crossover move off of turn two on lap 15 to take the position as they raced down the backstretch. He was able to tuck under Gordon as they raced into turn three.

Traffic became an issue for Susice on lap 25. He was out of comfort zone now as he was forced give up his line on the top to work the bottom lane .  He struggled to make any headway for several laps as he was patient working in traffic.

“I could tell by the lap counter that I had a pretty good lead when we got in to lapped traffic,” mentioned Susice.  “I knew I was in pretty good shape.”

There were 29 laps complete when another caution was necessary as Susice and August made contact in turns three and four. August ended up spinning off the top of the track for the yellow.

Susice was strong at the green keeping everyone at bay.  As he showed the way Cartwright was able to make some ground on the top moving his way up to third with nine to go.

One final caution came on lap 31 as Mike Bills, who was running sixth, slowed and stopped in turn four. Susice remained the leader at the green with Cartwright going by Gordon for second as they came to the line off of four.

Susice was unstoppable over the final nine laps to earn the $2,000 win. Cartwright ended up finishing in the second position after charging from 13th.

“We tried to put on a show,” mentioned Cartwright.  “About halfway through we lost the right rear shock.  This a pretty good finish without the shock.”

Gordon wound up finishing third after leading the first portion of the race.  Scott Wood was fourth with Boyd MacTavish completing the top five.

In other action Kyle Inman made a late charge in the 30-lap GRIT Sportsman main-event to earn the win.  Kurt Stebbins won the Crate Late Model 25-lap feature.  Doug Jones won the Street Stock 20-lapper while Brad Shepard earned the win in the Mini-Stock 15-lap main.