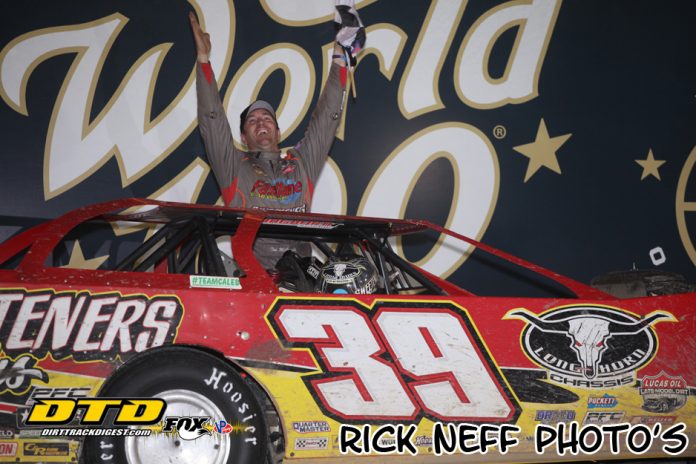 ROSSBURG, OH — After two Prelim Nights, spread over a 37-day period, the 48th annual World 100 concluded with the main event of the 2018 racing season in the Dirt Super Late Model World. The famed ½ (0.500) mile high-banked dirt oval of Eldora Speedway (OH), located just east of the Indiana/Ohio state line in Rossburg, Ohio served as hosts of the “Granddaddy of them all” on Saturday, October 13. After the 78 teams, who returned from the September rain out and had to wait an extra day, again due to Mother Nature, the result was a “Doubleheader Saturday” at the western Ohio speed plant that saw the teams race in the morning/afternoon and again in the evening.

Under a cool fall night at the track and when all was said and done, 2006 World of Outlaws Craftsman Late Model Series Champion, Tim McCreadie would leave the famed Big “E” with the biggest win of his career after scoring his first World 100 triumph and Globe Trophy that comes with winning the prestigious event. The Watertown, NY veteran took the lead from pole-sitter, Devin Gilpin on lap 45 and the 44-year-old would survive a restart with 16 laps to go to secure the victory, worth $51,000.

“You just don’t know when things like this will go your way. You just keep struggling and trying and hoping that it’ll all work out and tonight it did.” An emotional McCreadie stated surrounded by his crew, family and friends surrounding his #39 Sweetners Plus / Longhorn Chassis / Pro Power Racing Engines entry. “We’re not here to just be here. We’re here to try to win and tonight was our night. The struggles have been tough. It’s been hard on the crew guys, it’s been hard on me, it’s been hard on the family, it’s been hard on everybody. We changed the car around from this afternoon. We went to work and tried to make the car drive better and it worked. As heartbreaking as last week was with missing Oswego, it hurt my feelings. Maybe that’s the way life goes though you have to lose something that you really cherish for something that arguably is bigger. This place means a lot to a lot of people. I don’t always see it because I didn’t come from here. But I understand it, especially now.” He smiled.

It would be Eldora Track Points Leader, Devin Gilpin and former two-time World 100 winner, Brian Birkhofer leading 30 of the best Dirt Super Late Model drivers in the country to the green flag to start the most prestigious race in the country. It would be Gilpin beating Birkhofer to the first corner to grab the early lead while the rest of the field jockeyed for position behind him. McCreadie, who started fifth, methodically picked his way up to the podium and would trail 2015 Outlaws Champion and 2008 World 100 winner, Shane Clanton, who started ahead of him in third as both went by Birkhofer for second and third respectively.

McCreadie slipped past Clanton for second and set his sights on Gilpin who had built up a sizable lead. Soon McCreadie was on Gilpin’s back bumper and the battle was on for the lead. Five laps before the halfway point of the race, McCreadie made what would be the winning pass on lap 45 by sliding past Gilpin and pulling away from Gilpin and the rest of the field. With 25 laps to go, another former two-time World 100 winner, Jimmy Owens was able to get by Gilpin for second and set his sights on a possible third career Globe Trophy.

McCreadie had built up a six-second lead when the nights second and final caution flew with just 16 laps to go. This set up one final chance for Owens to get past McCreadie. However, on the restart, McCreadie blasted out ahead of Owens and again pulled away from the rest of the field. He was never seriously challenged the rest of the way and in the end, would see the checkered flag first and his name to the list of winners of the most prestigious Dirt Super Late Model race in the world.

Owens settled for second ahead of Tyler Erb, who started 16th and would complete the podium finishers. Four-time World 100 winner, Scott Bloomquist came home in fourth as 2015 Outlaws Rookie of the Year, Brandon Overton completed the top five after starting in 14th. Gilpin would settle for sixth but would clinch the 2018 Eldora Speedway Super Late Model Track Championship, the first in a Super Late Model, of his career. Four-time Outlaws Champion, Josh Richards was seventh after starting in 19th while a pair of former World 100 winners, Dale McDowell from 22nd, Earl Pearson Jr., from 18th and outgoing Eldora Track Champion, Kent Robinson rounded out the final top 10.