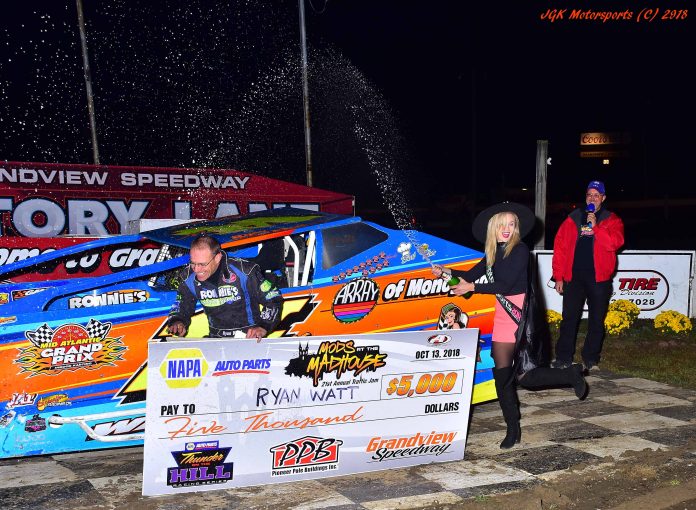 BECHTELSVILLE, PA – It was a chilling fall night of racing when Boyertown, PA’s Ryan Watt scored the victory in the twenty-first running of the Modified Traffic Jam, the season finale of the NAPA Auto Parts Thunder on the Hill Racing Series events at Grandview Speedway Saturday night. Watt has been haunted from winning a Thunder show for years, so how appropriate that his first win came in the Halloween House of Thunder event. Craig Whitmoyer and Kyle Smith claimed victories in the Sportsman and MASS Sprint Car Series events, as part of the thrilling three-division show.

“I can’t believe we won, I’ve tried to win a Thunder on the Hill Race so many times — I finished second at the August race, and I’m glad to get one of these Thunder wins finally,” an ecstatic Watt said in victory lane while surrounded by family, friends and crew members. His first win earned him $5,000 in a very lucrative payoff that offered $1,000 to finish tenth and $500 just to start the feature event.

Forty-six modifieds attempted to qualify for the big event and it was Ryan Watt who rolled off second in the 24-car starting line-up, alongside 2018 Grandview Speedway Modified Champion, Mike Gular. Watt won the drag race down the front stretch taking the top spot despite strong attempts from Gular. Battling for the lead, the top two dueled side-by-side for the initial stage of the race, followed by Frank Cozze and Kenny Gilmore.

Meanwhile, Craig VonDohren charged forward from an eighth-place start into the fifth position on lap 4, leading a train that included Jared Umbenhauer and Doug Manmiller.

The lead pack closed in on lapped cars by the tenth circuit, and the aptly named ‘Traffic Jam’ bunched the field with multiple two and three-wide battles. Relief came after a close call for the leaders when two cars tangled directly in front of them.

“Lapped Cars made things tricky tonight,” Watt said in victory lane. “You never know which way anyone is going to go and when they are side-by-side, it gets tricky.”

Opting for the outside lane on the restart, Watt left the door open for Gular, who pulled alongside challenging for the top spot. Jared Umbenhauer charged into the third on the restart and swapped the second position with Gular just two laps later.

Ryan Watt pulled away in the later stages of the 40-lap event, weaving in and out of slow traffic and maintaining the top spot as laps clicked off.

It was all Watt as the checkered flag waved, Mike Gular finished in second – holding off a late race charge from Jared Umbenhauer, who settled for third. Craig VonDohren finished in fourth, and Doug Manmiller finished in the fifth position.

Craig Whitmoyer claimed the victory in the 25-lap Sportsman event – his 13th Grandview Speedway victory. Mike Lisowski started on the outside pole and led the early stages of the race– but Lisowski was forced pitside on lap 15 when officials discovered missing right front lugnuts on his No. 15 machine. Brad Grim inherited the lead on the restart and lost the lead to Whitmoyer after a three-car battle for the top spot that also included Kevin Hirthler. A lap 22 yellow slowed the field for the final time and Whitmoyer engaged in a three-car race to the finish with just three circuits remaining. Whitmoyer held on for the win with Grim and Hirthler settling for second and third, respectively. Dean Bachman finished in fourth, and Kyle Kania finished in the fifth position.

Kyle Smith of Great Barrington, Massachusetts picked up the victory in the 25-lap Mid-Atlantic Sprint Car Series event, holding off Jeff Geiges and a slew of late race caution flags. Geiges of Hamilton, NJ took the early lead and led the initial eleven circuits before a lap 11 yellow slowed the field. With a double-file restart, Geiges opted to restart on the top side opening the door for Smith, who powered down the front stretch overtaking the top spot. Geiges slid inside Smith but couldn’t stick the attempted slide job. Geiges would settle for second, Ryan Stillwaggon finished in third, Jon Haegele coming home in fourth and Tyler Reinhardt rounding out the top 5 finishers.

– Fans of all ages dressed in costume as part of the House of Thunder Halloween parade – judges selected the best-dressed children and rewarded them with prizes.

– Plans are currently in the works for 2019 racing season and the Thunder on the Hill Racing Series 30th Anniversary of events.